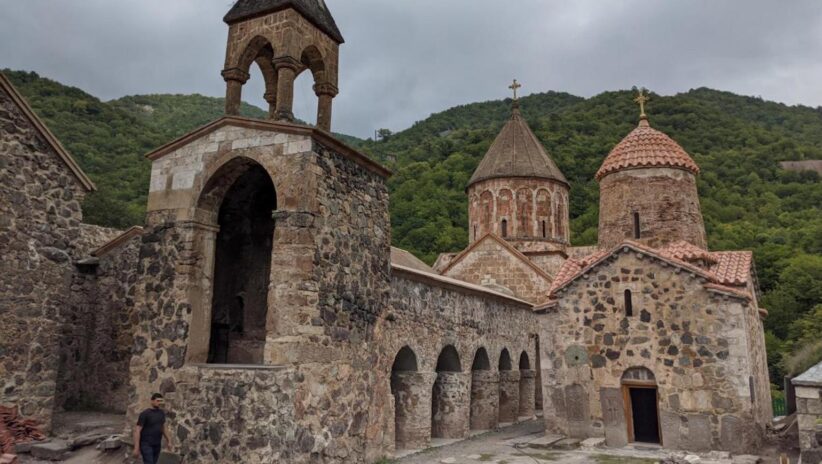 Sarhat Petrosyan, former chairman of Armenia’s State Committee of Real Estate Cadastre, says that his mapping analysis shows that Karabakh’s Dadivank Monastery remains in the territory under the control of Armenian or Russian forces.

Built between the 9th and 13th centuries and located in the Karvachar district of Karabakh, Dadivank Monastery is an important religious site for Armenians but is due to be handed to Azerbaijan per a ceasefire agreement signed by Armenian, Azerbaijani, and Russian leaders.

“We did something very simple. We embedded the map published by the General Staff of the Russian Federation onto Google Maps. This shows that Dadivank and Tigranakert remain in the territory of the Armenian (or Russian) forces,” Petrosyan wrote.

He told CIVILNET that it has been two or three days that people are discussing various unclear terms in the agreement. Others have also been urging him to go with them to the monastery and help transfer parts of it to Armenia.

Petrsoyan admits that his analysis is a preliminary calculation and that it needs more clarity and a more accurate installation.

“Let the appropriate and capable people and agencies respond. We will correct if there is more precise data,” he says.

Then he points to the next problem. The Amaras Monastery, located in Khojavend district, is 5 km out of Armenian or Russian controlled territory.

“In the case of normal negotiations, in the next few days, it is possible to try (perhaps by conceding another equivalent area) to bring back the 4th century Amaras Monastery,” Petrosyan says.

In a November 11 interview, Father Hovhannes Hovhannisyan, the pastor of the Karvachar region and the abbot of Dadivank, said, “We are not giving up Dadivank. Artsakh President Arayik Harutyunyan called me and said, ‘Do not touch Dadivank, do not touch the crosses, we will not give up Dadivank.’”

On the same day,  Karabakh President press secretary Vahram Poghosyan wrote that the issues of territorial concessions and the terms announced in that context had not been discussed with the authorities yet. He appealed to the residents of various districts, asking not to be in a hurry to transfer out properties.

What’s Next For Nikol Pashinyan?

In Goris, Artsakh refugee reflects on a land lost with “one signature”