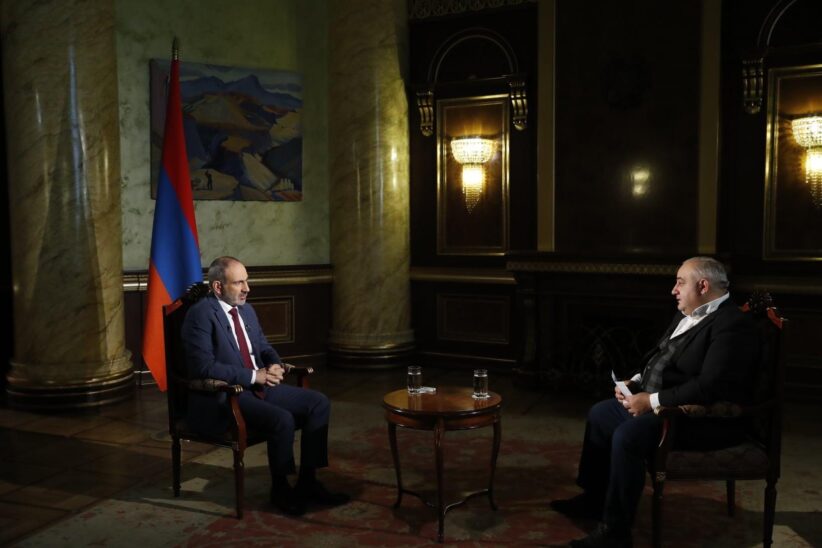 “First and foremost, this was a joint statement, not an agreement,” Armenian Prime Minister Nikol Pashinyan said Friday during an interview on Armenian Public TV.

In his first public interview since the signing of the ceasefire document on November 10 that conceded large parts of Karabakh to Azerbaijan, Pashinyan attempted to clarify the decision amid days of protests in Armenia.

“This decision [to sign the document] was made after a military analysis,” he said. “The fact is that Stepanakert was left defenseless following the fall of Shushi. If the war did not cease within minutes, Stepanakert would also fall, after which Martakert and Askeran would follow.”

According to the prime minister, roughly 20,000 to 30,000 soldiers would have been surrounded in that scenario. And that those surrounded soldiers would not have been able to impact the situation in Stepanakert because they were protecting the frontline and the fighting was behind them.

Pashinyan says that, “The reality is that this document was not just about giving up, but about keeping what was left. The loss was inevitable per military calculations.”

Pashinyan admits that serious organizational and institutional problems within the military became apparent during the war. He stressed that the current system to mobilize and support the army did not work well.

“This war showed that special forces within the military are very important. This program was introduced and begun to be implemented in 2019, but they were not fully ready for the war,” notes the prime minister.

At the center of public debates are the events surrounding the fall of Shushi, Karabakh’s second largest city.

In attempt to clarify the rumors, Pashinyan noted, “Decisions were made at a moment when it was realized that further struggle won’t mean anything. It was the moment when Shushi fell. Before Shushi fell, all other scenarios to end the war included giving up Shushi without a fight. But I never agreed to those. After Shushi fell, there were two attempts to recapture it. The first attempt failed. During the second attempt, one [Armenian] special forces unit was able to enter Shushi. But, that group was unable to sustain its position.”

Asked about calls for his resignation and daily protests against his decision to sign the document, Pashinyan said that transition of power has mechanisms in the country that must be followed, and that the stability of the country will allow his government to negotiate the unclear terms of the agreement.

“This document is about a ceasefire. It is not about a political settlement of the Karakabh issue. There are terms in the agreement that need discussions and those discussions will take place,” he reiterated.

The prime minister believes that the opening of the Armenia-Iran highway, as well as routes to Russia, must also be negotiated within the framework of the agreement.

Pashinyan explains fall of Shushi and the decision to sign ceasefire

In Goris, Artsakh refugee reflects on a land lost with “one signature”