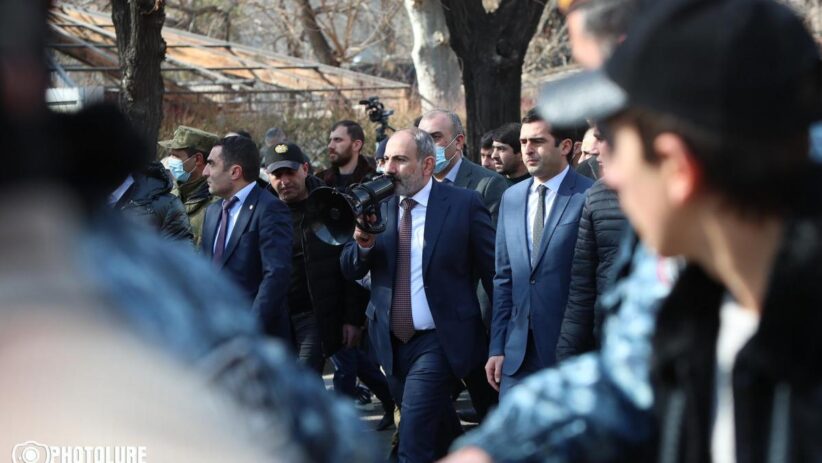 On Wednesday, Prime Minister Nikol Pashinyan said that the Iskander missile systems purchased from Russia were defective. This provoked an outrage within the military and the opposition, who believe that the prime minister is trying to find reasons to justify his failures during the Karabakh War.

Earlier today, the Armenian Armed Forces General Staff demanded Pashinan’s resignation with a statement signed by the entire leadership including the Chief of the General Staff, high commanders of the military, and the heads of all departments.

“The Prime Minister of the Republic of Armenia, the government, will no longer be able to make adequate decisions in this critical situation for the Armenian people,” the statement read.

The General Staff of the Armed Forces also expressed its “resolute protest” against the dismissal of Tiran Khachatryan, who was recently let go of his position by President Armen Sarkissian at the request of the Armenian prime minister.

In response to the army’s, around noon local time, Prime Minister Nikol Pashinyan stated on his Facebook page that, “I consider the statement by the General Staff to be an attempt at a military coup. I am inviting all our supporters to Republic Square right now. I will address the public LIVE in the near future.”

Shortly after, at 12:28pm, Nikol Pashinyan started his Facebook LIVE. During his LIVE, Pashinyan stated that he considers the statement set forth by the General Staff as an attempt at a military coup, and he invited all of his supporters to the Republic Square as soon as possible.

Pashinyan also said that he has reportedly removed Onik Gasparyan, the Chief of the General Staff of the Armenian Armed Forces, and will shortly appoint a new chief of staff.

Furthermore, the President of Nagorno-Karabakh Arayik Harutyunyan is in Yerevan and stated that he was ready to fulfill his mediating mission in overcoming the political crisis in the country.

“I am ready to conduct a mediation process to overcome the political crisis in Armenia,” stated the Nagorno-Karabakh president. “Our defeat will be much deeper and fatal. The blood we have shed is enough, now is the time to put an end to the crises.”

Pashinyan has since joined the group of supporters at Republic Square and is marching the streets of Yerevan with his supporters.

Vazgen Manukyan, the opposition’s prime ministerial candidate, said that the movement “welcomes the statement of the General Staff of Armenia’s Armed Forces and expresses its support for the Armed Forces as the only and selfless guarantor of our country. “

Manukyan called on citizens to gather at Liberty Square at 3:00 PM local time to express their solidarity with the Armed Forces.

Artsakh’s President Calls for Calm and Offers his Mediation

Russia, Turkey and Azerbaijan React to the Crisis in Armenia