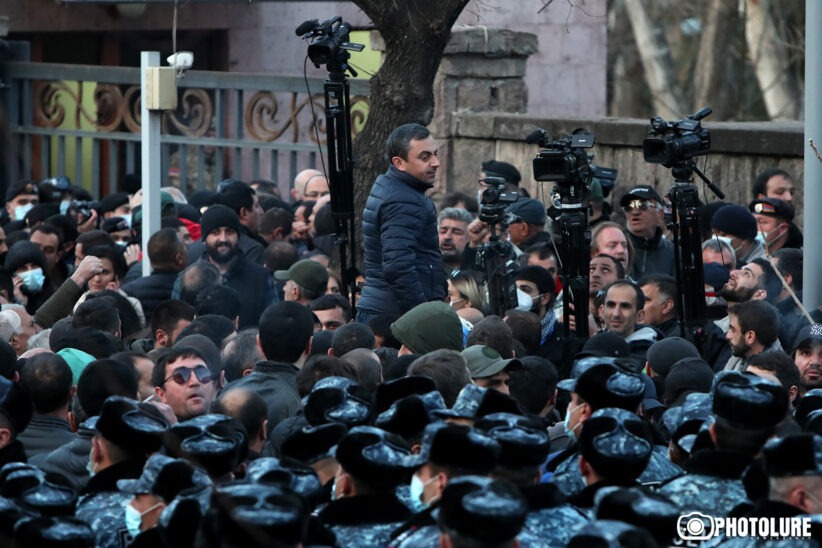 Iskanders are mobile short-range ballistic missiles developed and produced by the Russian military. Military experts consider the Iskanders to be the most advanced ballistic missile system in Armenia’s arsenal. Armenia bought the missiles from Russia in 2016.

Pashinyan’s claim came on the heels of an interview by former President Serzh Sargsyan in which he criticized the Armenian armed forces for allegedly deploying Iskander missiles only in the final days of the war, when ethnic Armenian forces had already lost control over much of the territory in and around Nagorno-Karabakh, including the second city of Shushi, a key strategic and cultural site.

Later, Pashinyan announced that he was dismissing Tigran Khachatryan, the first deputy chief of the Armenian army’s general staff, who had reportedly mocked Pashinyan’s claims about the Iskanders. In response, a group of more than 40 senior military leaders signed an open letter on February 25 excoriating Pashinyan for putting Armenia “on the brink of collapse” and demanding his immediate resignation. Radio Free Europe’s Armenian service reported that signatories included “the heads of the General Staff divisions as well as the commanders of all five army corps.”

In turn, Pashinyan decried the army’s move as “an attempted military coup” and then moved to fire Onik Gasparyan, the chief of the Armenian army’s general staff, further deepening the political standoff.

On February 27, President Armen Sarkissian, who plays a mostly ceremonial role in Armenia’s domestic affairs, refused to sign off on Pashinyan’s dismissal of Gasparyan, prompting further criticism from Pashinyan. Sarkissian again refused to relieve Gasparyan of his duties on March 2. But, within a week, as stipulated by the Armenian Constitution, Gasparyan was officially dismissed, even without Sarkissian’s approval.

Meanwhile, outcry over Pashinyan’s remarks about the Iskander missiles was growing in Russia, Armenia’s closest military and economic ally. On February 28, Channel One, one of Russia’s largest television networks, carried a report on Armenia’s political situation that was highly critical of Pashinyan.

Armenia-Russia ties have been strained since the April-May 2018 Velvet Revolution, spearheaded by Pashinyan, that culminated in the ouster of the pro-Russian administration of former President Serzh Sargsyan.

On March 1, Pashinyan’s spokesperson, Mane Gevorgyan, attempted to walk back his claim, saying that “the prime minister came to the conclusion that the situation was not reported to him accurately.” Following Gevorgyan’s interview, Dmitry Peskov, the Kremlin spokesman, said that “the truth has been restored.”

But it appears that the attempt at damage control came too late. On the very same day, thousands of supporters and opponents of Pashinyan gathered for duelling rallies in central Yerevan. During the pro-Pashinyan rally, the Prime Minister gave an hour-long speech in which he criticized the country’s military leaders for trying to end “the people’s power.” Pashinyan also repeated an offer he made in late December 2020 to hold early parliamentary elections. “We will agree to pre-term parliamentary elections if that offer is accepted by the parliamentary forces,” he said, referring to the Bright Armenia and Prosperous Armenia parties, the two opposition parties with seats in the National Assembly.

Meanwhile, at the anti-Pashinyan rally, the opposition and their supporters rejected Pashinyan’s offer to hold snap polls, reiterating their demand that early elections should be held only after Pashinyan resigns and an interim government of national unity, ideally led by former Prime Minister Vazgen Manukyan, takes over. Opposition demands for Pashinyan’s dismissal have been stymied by Pashinyan’s My Step alliance, which holds an overwhelming majority in the National Assembly.

The organized opposition to Pashinyan is led by the Homeland Salvation Movement, a recently-formed alliance of nearly 20 opposition parties, including the former ruling Republican Party and the Armenian Revolutionary Federation (Dashnaktsutyun). However, only one of the parties in the alliance, Prosperous Armenia, actually has elected members in the National Assembly. The remaining parties either did not exist at the time of the last election, did not run, or did not receive enough votes to enter the legislature.

A few days after the rallies, Pashinyan held talks with Edmon Marukyan, the leader of Bright Armenia, who has appeared more willing than Gagik Tsarukyan, his Prosperous Armenia counterpart, to hold early elections even as Pashinyan’s government remains in office. However, following the meeting, Marukyan announced that “no understanding has been reached with the prime minister.” As of March 9, talks between the My Step alliance, Prosperous Armenia, and Bright Armenia remain ongoing.

Armenia’s ongoing political crisis has roots in ethnic Armenian forces’ disastrous handling of the September-November 2020 war in and around Nagorno-Karabakh. The short but bloody war concluded with Azerbaijan in control of seven districts around Nagorno-Karabakh, as well as parts of the former Nagorno-Karabakh Autonomous Oblast, the Soviet-era administrative entity that voted to secede from Azerbaijan in 1991. It is believed that over 5,000 lives were lost on both sides during the six-week conflict, which ended only after Russia brokered a ceasefire and sent in nearly 2,000 Russian peacekeepers to the region. The final status of Nagorno-Karabakh remains undetermined.

U.S. Congress to Call on Azerbaijan To Release Armenian Hostages