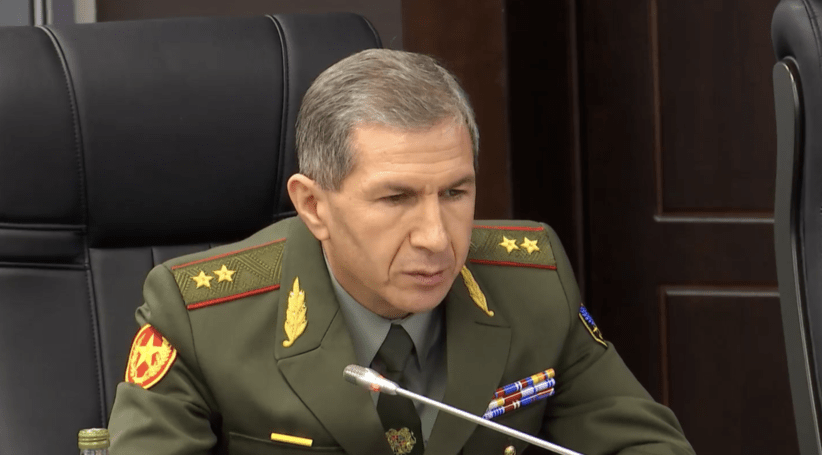 On March 10, the Armenian government issued a statement regarding the dismissal of Onik Gasparyan from his post as Chief of the General Staff of the Armenian Armed Forces.

Gasparyan responded to his dismissal with a statement, announcing that his “position remains unchanged.” He added that “both the published statement and the entire process of dismissal are unconstitutional, which, once again, confirms that a patriotic solution to the current crisis can only be ensured as a result of the resignation of the Prime Minister of the Republic and early parliamentary elections.”

Gasparyan finished stating that he “will continue my service to the homeland and the Armenian people in a different status.”

Head of the Information Department of the Administrative Staff of the General Staff of the Armenian Armed Forces, Colonel Samvel Asatryan, reaffirmed Gasparyan’s statement. He stated that “there is only one solution to the existing situation” and is the one mentioned by Gasparyan regarding the resignation of the Prime Minister of the Republic and hosting early parliamentary elections.

With the formal dismissal of Gasparyan, Prime Minister Nikol Pashinyan has submitted a motion to the president to appoint Artak Davtyan as new Chief of the General Staff of the Armenian Armed Forces.

Artak Davtyan held the position of chief of the general of staff from 2018-2020. On July 16, 2020, he was appointed chairman of the Military Industry Committee by Pashinyan, and on November 11, he was relieved of this position.

On February 27, the President Armen Sarkissian sent back the mentioned draft with his objections. The prime minister did not accept the objections presented by the president, and on February 28, a letter was sent to the president with the relevant justifications.

On March 2, the presidential administration reported that Armen Sarkissian decided not to sign the decree drafting releasing Onik Gasparyan from his post. The following day, Sarkissian met with Onik Gasparyan to discuss his dismissal and the country’s current situation.

Presidential Elections – by Direct Vote or Without it?