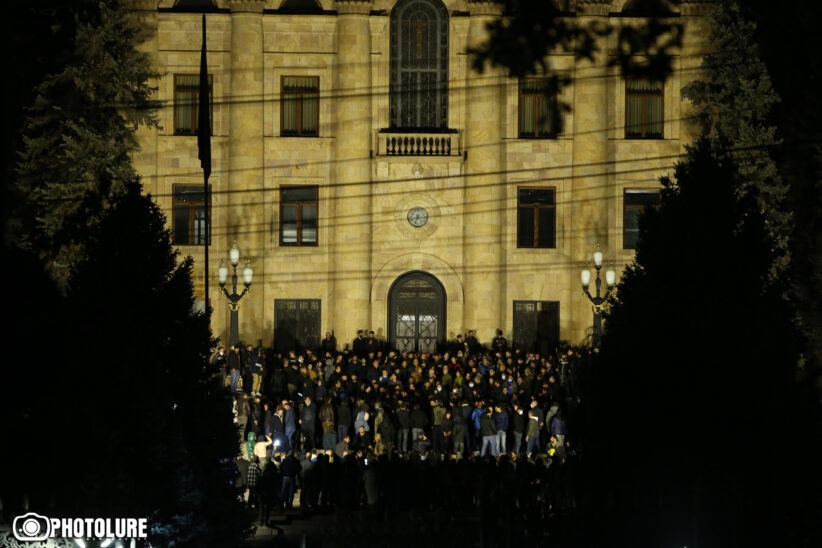 People storm the parliament, after Armenian Prime Minister Nikol Pashinyan said he had signed an agreement with leaders of Russia and Azerbaijan to end the war on November 9 2020, in Yerevan, Armenia.

Armenians are increasingly distrustful of key public institutions, results from a newly-published public opinion survey show. The poll was conducted last month by the Center for Insights in Survey Research at the International Republican Institute (IRI), a Washington-based “international democracy-development organization.”

According to the survey, the majority of Armenians have a “very” or “somewhat” favorable opinion about only six institutions: the army (73%), the police (63%), the Human Rights Defender’s Office (60%), local authorities (56%), the prime minister’s office (54%), and the Armenian Apostolic Church (52%).

At the same time, the majority of respondents reported holding a “very” or “somewhat” unfavorable opinion about seven institutions: political parties (73%), the National Assembly (64%), the president’s office (60%), courts (57%), the Constitutional Court (55%), the cabinet of ministers (53%), and the prosecutor’s office (53%).

These statistics suggest that trust in public institutions has fallen considerably in recent years. For instance, in a September-October 2019 IRI poll, only four institutions received a “very” or “somewhat” unfavorable rating from the majority of respondents: the courts (57%), the prosecutor’s office (55%), political parties (52%), and the Constitutional Court (51%). Notably, public distrust in political parties has surged by a whopping 21 percentage points between the two surveys.

In addition to the six institutions listed in the 2021 survey, the majority of Armenians in 2019 also reported favorable views about the president’s office (82%), the cabinet of ministers (63%), and the National Assembly (63%). Intriguingly, all three of those institutions are now distrusted by the majority of the country.

Moreover, public trust in four of the five institutions that the majority of Armenians reported trusting declined between the two surveys. In that period, trust in both the prime minister’s office and the Armenian Apostolic Church declined by a massive 22 percentage points, while trust in the army dropped by 18 points and trust in the Human Rights Defender’s Office fell by 3 points. Only the local authorities improved their position, from 55% in 2019 to 56% in 2021.

Data from the Caucasus Barometer also support the view that trust in public institutions is largely on the decline in Armenia. The barometer is an annual household survey organized by the Caucasus Research Resource Centers, a prominent think tank network in the South Caucasus. The most recent survey was conducted in Armenia in February-March 2020, roughly four months after the 2019 IRI poll, but about a year before the 2021 IRI survey.

Case in point: In the 2020 Caucasus Barometer poll, 88% of respondents reported “fully” or “rather” trusting the army. This figure lies between 2019’s 91% and 2021’s 73%. Likewise, 80% of respondents in the Caucasus Barometer survey reported “fully” or “rather” trusting the religious institution to which they belong — relatively close to 2019’s 74% level of trust in the Armenian Apostolic Church, but much higher than 52%, the 2021 statistic. (The vast majority of Armenians identify as belonging to the Armenian Apostolic Church.)

The apparent decline in Armenians’ trust in public institutions comes as the country grapples with an explosive political crisis following ethnic Armenian forces’ disastrous losses in the September-November war in and around Nagorno-Karabakh. Talk is swirling of snap elections, though meetings about early polls between the ruling My Step alliance, on the one hand, and the two opposition parties represented in the National Assembly, on the other, have so far yielded few concrete results. 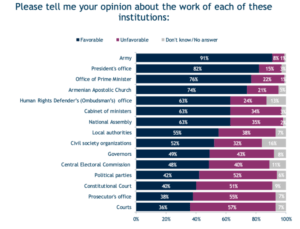