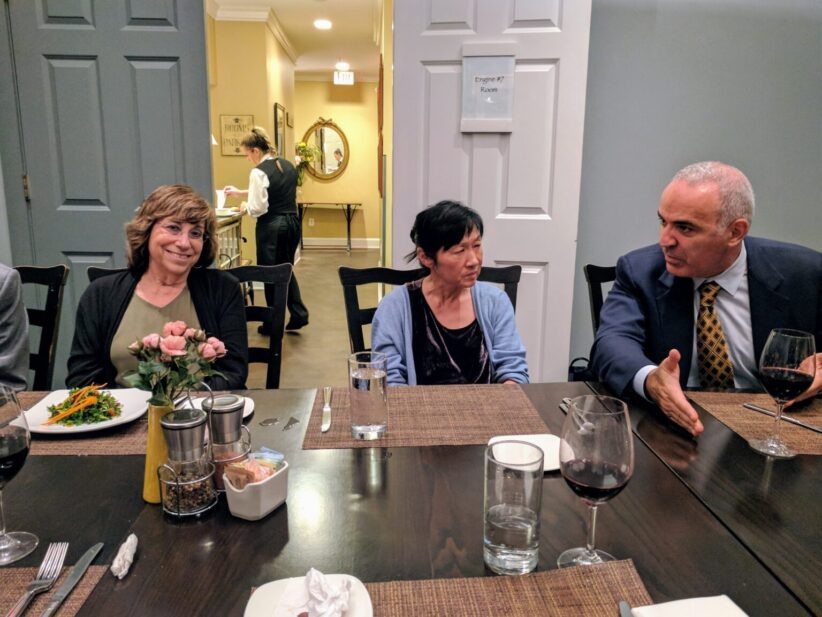 In 2017, I had the opportunity to interact with Garry Kasparov for several hours. He came to the Massachusetts Institute of Technology (MIT) to speak about Putin’s Russia. The hall was filled to the brim, about 500 people were present. Kasparov, of course, was criticizing Putin.

After his speech, the organizers invited him and several participants for dinner. We went to a nice restaurant. The conversation at dinner was a continuation of the speech. “Putin is like this, Putin is like that,” he said. At some point I lost my patience and dared to disagree with the grandmaster. I said, “Yes, Putin is a scoundrel, but as an American, I would like us to ask ourselves, what did the United States do to provoke a conflict with Russia?” I listed several major mistakes on America’s part. Garry got tense and said, “Woah, what are you saying? That it’s all America’s fault?” I answered, he answered and… it kicked off from there.

Now imagine the scene. In an elegant restaurant in the center of Cambridge, the Americans, perplexed, are watching in fear two stubborn Armenians as they quarrel loudly. In the end, feeling the awkwardness of the situation I  said: “Ok Garry, let’s agree to disagree.” He smiled with relief, and we changed the subject.

Later, as I was leaving, I shook his hand and said that it was a pleasure to meet him at last. He answered. “It was such a pleasure, you argue like a real Armenian!” And he said that with such enthusiasm as if he had missed those arguments. To say that it was one of the most delightful dinners of my life is to say nothing.

Kasparov and the Baku Pogroms

We changed the subject and started talking about Baku. I said that I had heard that he and his family had barely survived the 1990 pogroms in Baku. He replied that something like that did happen and told us the following story.

One day in January 1990, the police contacted the Kasparovs and said that an enraged mob was coming towards their district and would be there in half an hour. They quickly sent a bus for the Armenians in the building. Garry’s grandmother refused to go, saying, “This is my city, I am not going, let them come and kill me.” Somehow they persuaded grandma to leave. The bus took off towards the airport.

There was an Azerbaijani policeman on the bus. He got information  by radio saying that the crowds had cut off the road leading to the airport. At this point the policeman turned to Kasparov and said: “Look, this is my gun. If you get caught, put it to my head and threaten to kill me. If you do that, they will leave you unharmed.”

Do you comprehend this? The Azerbaijani policeman gives his weapon to a stranger, which is already a criminal offense. And he gives it not to someone, but to an Armenian. And then he tells him to point the gun at his head and threaten to kill. He says this to an Armenian.

Why did he do that? Why did he endanger his job, his freedom and even his life? For what purpose? To save his “Armenian enemy?” No, he did that because he was just a human whose conscience and love for another human (regardless of his nationality) were stronger than his own instinct for self-preservation. There is a word that describes such a person – righteous. A just human, a human driven by righteousness.

Fortunately, there was no need for that extreme measure. The mobs were dispersed, and the road was cleared.

I am retelling this story because I have heard many such stories about Azerbaijanis rescuing and helping Armenians… I know of a case when an Azerbaijani came out into the street and shouted to the crowd that they would have to kill him first before touching any of the Armenians in his building. I know many cases when Azerbaijanis hid Armenians in their homes. Or they brought food and helped in some other way. People have done this while risking their and their families’ lives.

Instead, we talk endlessly about the Ramil Safarov types and various crazy lowlifes. We write, we speak, we read about them… again and again and again. And now I am sure that below this article you will start listing stories of how this or that person killed an Armenian. I KNOW. You do not need to tell me about them because I know about them better than you do. We have been chewing on these stories for thirty years. We consume these stories like cheap wine and get drunk with the illusion of our “superiority” over the “Azeri savages.”

As if nine million Azeris are all Ramil Safarovs.

We do not talk about Akram Aylisli.

We are not talking about Akram Aylisli, who, knowing full well what would happen to him and his family, wrote Stone Dreams (the book has been translated into Armenian, Russian, and can be read online). He tells in great detail about Agulis and Baku massacres. I read that book. It is a wonderful work that should be read in all Armenian and Azerbaijani schools. Aylisli said that he wrote the book not to “protect” Armenians, but to save the conscience of Azerbaijanis. And he did it due to his shock at the return of Ramil Safarov. (You can learn more about it in the following webinar).

I am convinced that there are a large number of “Aylislis” in Azerbaijan who simply do not dare to speak up, because ultranationalism prevails both in Armenia and over there. Why don’t we read Stone Dreams in Armenian schools? Why weren’t the works of Aylisli and a number of righteous Turkish writers (for example, Orhan Pamuk, Elif Shafak) included in the curriculum changes? Because our nationalists are against it? Because Stone Dreams shows that besides the massacring Azerbaijanis there are also noble, humane Azerbaijanis?

Our nationalists do not need that. They need hatred. When we consider these two types of Azerbaijanis as one primitive “Azerbaijani” unit, we label these righteous people as “Ramil Safarovs”. It is deeply unfair to them (as well as to us), but it is very, very beneficial for our nationalists. Both our and their nationalists want the people to hate each other; their political power is based on that. The history of Armenians and Azerbaijanis of the last thirty years is a story of being held hostage to nationalism.

So, when I say that you should look for humanity in your opponent, it does not mean to look for it in “ramilsafarovs” and such scoundrels. (Moreover, we must continue to develop our military force while seeking a common language with the neighboring country). It means looking for humanity in the “Aylislis” and the ordinary Azeris. To see that there are normal people among them.

We should look for these “Aylislis.” We should find them. And we should talk to them. We need to understand that they are human, too. They love and grieve too. They also rejoice with their children and mourn over the body of their fallen son. They too have suffered from this hundred-year war and suffered from “the blow of our hand.” This means ignoring the outbursts of ultranationalists who keep yelling “traitors, sorosists!” We have to talk to each other honestly, like normal people do… to the extent that it is possible.

OSCE Chairperson in Armenia For Talks on Karabakh Issue