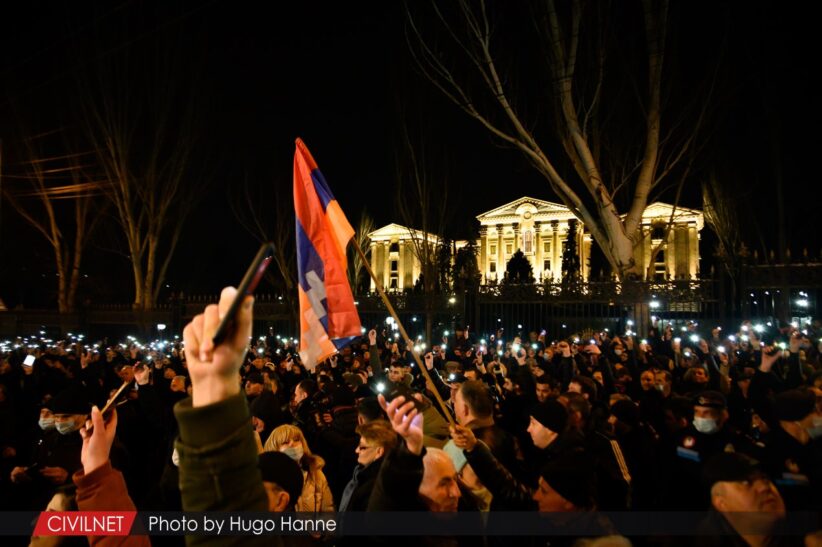 Talk of early parliamentary elections has dominated political discourse in Armenia following its military defeat in the conflict in and around Nagorno-Karabakh late last year. But while polling suggests that the majority of Armenian citizens support snap elections, deep divides have emerged across the country’s political spectrum as to how exactly that vote should be conducted — and particularly whether Prime Minister Nikol Pashinyan should remain in power during what promises to be a fierce and chaotic election campaign.

The Homeland Salvation Movement, a newly-formed alliance of 17 opposition parties that is referred to as “the street opposition” in Armenia, called for Pashinyan’s dismissal after the disastrous September-November 2020 war, and, since then, has repeatedly demanded that Pashinyan resign before snap polls are held. Most recently, former Prime Minister Vazgen Manukyan, whom the Homeland Salvation Movement has put forward to lead an interim government of national unity to oversee early elections, reiterated those demands in a March 15 speech, saying that “snap elections under [the current] government must be avoided at all costs.” Only one of the alliance’s 17 parties, Prosperous Armenia, has seats in the current parliament.

The next day, former President Levon Ter-Petrosyan backed that call by Manukyan, a former electoral rival in Armenia’s 1996 presidential election, arguing that “the only way out [out of the current crisis] is the resignation of the prime minister and the holding of elections under a non-partisan deputy prime minister.” In doing so, Ter-Petrosyan joined a long list of prominent Armenian institutions and individuals calling for Pashinyan’s dismissal, including current President Armen Sarkissian, the Armenian Apostolic Church, the National Academy of Sciences, the Armenian General Benevolent Union, and the leaders of Armenia’s Armed Forces. Ter-Petrosyan has previously warned that the ongoing political crisis threatens to escalate into civil war.

Meanwhile, Pashinyan and his My Step alliance, whose overwhelming majority in Armenia’s legislature has largely shunned efforts to oust the incumbent prime minister, have repeatedly flip-flopped on their willingness to hold snap elections. But in Pashinyan’s most recent public comments on the issue earlier this month, he again signaled his openness to the idea, saying that “we will agree to pre-term parliamentary elections if that offer is accepted by the parliamentary forces.”

The “parliamentary forces” in question are the Bright Armenia and Prosperous Armenia parties, the two other parties with seats in the National Assembly. Edmon Marukyan and Gagik Tsarukyan, the two parties’ respective leaders, have both indicated their support for holding snap polls under a government of national unity, rather than under Pashinyan’s administration. But talks on the matter between My Step, on the one hand, and Bright Armenia and Prosperous Armenia, on the other, have mostly stalled. Marukyan has called for elections to be held by June, while Tsarukyan has said they should happen in May or June. In contrast to Prosperous Armenia, Bright Armenia is not associated with the Homeland Salvation Movement.

The ongoing debate over how exactly to hold snap polls is complicated by stipulations in the Armenian Constitution that early elections can be held only after the prime minister resigns and the National Assembly fails twice to elect a new leader. Pashinyan has called on Bright Armenia and Prosperous Armenia to sign a memorandum of understanding, committing themselves not to nominate their own candidate following Pashinyan’s hypothetical resignation. Bright Armenia has committed to doing so, while Prosperous Armenia has not done so — yet.

Swirling talk of early elections has also refocused attention across Armenia’s political divides on the issue of electoral thresholds. Under the country’s current electoral code, individual parties must receive at least 5% of the vote to enter parliament, while political alliances, like My Step and the Homeland Salvation Movement, need 7% to gain seats in the legislature. Hamazasp Danielyan, a My Step lawmaker, has backed an amendment, currently up for debate in the National Assembly, to lower the threshold for individual parties from 5% to 3% — even though a survey last month suggests that the majority of Armenians, across all demographic categories, are opposed to such a move.

In that same poll, conducted by the International Republican Institute, a U.S.-based NGO, 33% of respondents said they would vote for My Step “if national parliamentary elections were held next Sunday,” while 42% of those polled said they would not vote for any party, a deeply worrying sign for Pashinyan’s future political prospects. By comparison, in a September-October 2019 IRI poll, 55% of respondents answered “My Step” when asked the same question, while only 10% of respondents said “none,” a clear indication of the hit Pashinyan’s once sky-high popularity has taken following the outcome of last year’s war.

Nonetheless, My Step’s 33% level of support in the February 2021 survey is a whopping 30 percentage points higher than any other party’s, suggesting that, despite the ongoing crisis, Pashinyan remains Armenia’s most popular politician. In fact, no other parties received more than 5% of the respondents’ support, meaning that they would not be able to enter parliament under the current electoral code if those same levels of support were to be replicated at the ballot box.

OSCE Chairperson in Armenia For Talks on Karabakh Issue