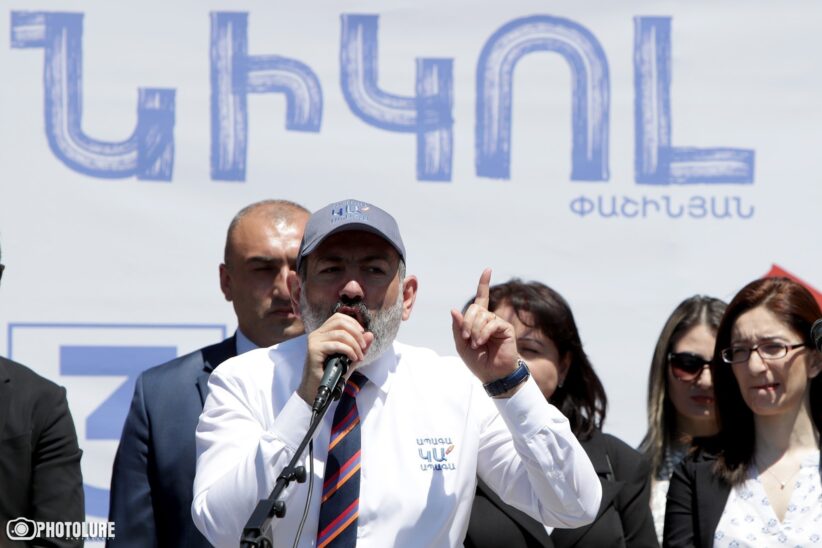 Civil Contract (Kaghakatsiakan Paymanagir) is a political party formed in 2013 by then-journalist and current acting Prime Minister Nikol Pashinyan. Since the last parliamentary election in 2018, Civil Contract, in tandem with the Mission Party (Arakelutyun Kusaktsutyun) as the My Step alliance (Im Kayle Dashink), has held the majority of seats in the National Assembly. In the upcoming polls, slated for June 20, Civil Contract is running alone, rather than in partnership with the Mission Party or any other political parties. The party is running under the slogan “There is a future” (Apaga ka).

Nikol Pashinyan was born and raised in the city of Ijevan, in Armenia’s northeastern Tavush province. In the late 1990s, he founded a daily newspaper called Armenian Times (Haykakan Zhamanak), which he led for more than a decade. His wife, Anna Hakobyan, is the paper’s current editor-in-chief. In the 2000s, the newspaper became well-known for its sympathetic coverage of former President Levon Ter-Petrossian and its withering criticism of then-President Robert Kocharyan and then-Defense Minister Serzh Sargsyan.

In 2008, Pashinyan helped organize protests on Yerevan’s Freedom Square following that year’s disputed presidential vote, which ultimately resulted in the election of Serzh Sargsyan as Armenia’s third president. On March 1, police violently broke up the rallies, resulting in the deaths of 10 people. Pashinyan was briefly jailed as one of the organizers of the protests.

A decade later, Pashinyan organized the protests that morphed into the April-May 2018 Velvet Revolution, resulting in Sargsyan stepping down from power. In elections that followed, Pashinyan’s My Step alliance secured the majority of seats in the National Assembly, elevating Pashinyan to the premiership.

Though he enjoyed sky-high approval ratings in his first months in office, Pashinyan has since faced growing dissatisfaction over his administration’s apparent inability to tackle the entrenched, systemic problems that Pashinyan himself pledged to address during the Velvet Revolution.

But Pashinyan has faced the most scathing criticism following Armenia’s disastrous defeat in the war in and around Karabakh in September-November 2020. In the course of the short but bloody war, Armenian forces lost control of the seven districts ringing Karabakh, as well as parts of the former Nagorno-Karabakh Autonomous Oblast itself, an administrative unit populated mostly by Armenians and governed by Armenians throughout the Soviet era. Under a Russia-brokered ceasefire, signed on November 10, Russian peacekeeping forces are now stationed in the area.

In the months since the ceasefire came into effect, various opposition forces have mobilized against Pashinyan’s government. Most notably, a collection of nearly 20 opposition groups called the Homeland Salvation Movement demanded Pashinyan’s resignation and the holding of early parliamentary elections. Although Pashinyan’s level of support has declined markedly since the end of the war, polling suggests that he remains Armenia’s most popular political figure, especially in rural regions.

Pashinyan formed the Civil Contract party in 2013 after splitting with former President Levon Ter-Petrossian’s Armenian National Congress. According to Pashinyan, his party has no set ideology. “We are a party that has rejected ‘isms’ because hardened ideologies no longer exist in the contemporary world,” Pashinyan explained in a 2019 speech. “We are forming a new ideological plane which is based on four key pillars: statehood, citizenship, national identity and personality.” In alliance with its minor partner, the party currently holds 88 of the National Assembly’s 132 seats.

The publication of Civil Contract’s list of candidates last week drew widespread attention — both because of who was in, and because of who was out. Among the latter are several major allies of Pashinyan, including acting Deputy Prime Minister Tigran Avinyan and Yerevan Mayor Hayk Marutyan. At the same time, two well-known oligarchs, Gurgen Arsenyan and Khachatur Sukiasyan, are included on the candidates list.

According to Pashinyan, the party is running on a platform that includes regaining control over some of the territories lost in last year’s war in and around Karabakh — by diplomatic means. It remains unclear what exact terms could be renegotiated or what specific territories could revert to Armenian control.