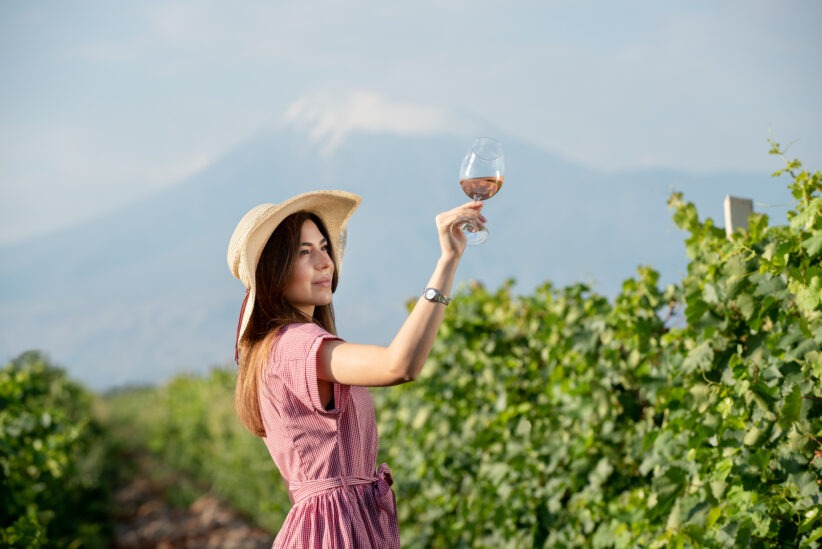 The Wine Incubation Project is a vivid example of successful cooperation between two programmes operating in the field of sustainable economic development and employment promotion – Economic and Social Participation of Vulnerable Displaced and Local Populations in the South Caucasus (EPIC) and Private Sector Development and Technical Vocational Education and Training in the South Caucasus (PSD TVET). The programmes are implemented by Deutsche Gesellschaft für Internationale Zusammenarbeit (GIZ) GmbH on behalf of the Federal Ministry for Economic Cooperation and Development (BMZ). Thus, the aim of the Wine Incubation Project is to create new opportunities for persons displaced from Syria and local women in the wine sector․ As a result of the project, 6 new Syrian Armenian and female winemakers have entered the local wine market. Below is the story of Gohar Gharibyan

“The art of winemaking was a great revelation for me. I got captured by it and decided to study it realising that hard work, knowledge and will are needed for that”.

21-year-old Gohar Gharibyan is one of the youngest participants of the Wine Incubation Project implemented by GIZ. She is also the youngest to have passed on to the second stage and taken the first steps in the wine business.

Gohar studies at Milk and Dairy Technology Department of Armenian National Agrarian University. She has always taken interest in winemaking; however, later it became a goal for her.

She managed to learn a few secrets of winemaking while studying at one of Italy’s universities. After studying winemaking a few months Gohar’s love for the field strengthened and she decided to apply for ICARE’s EVN Wine Academy.

“It was in April-May that I saw an announcement at EVN about five-month courses and I decided to apply. Luckily, I was accepted”, says Gohar.

The course differed from the university lectures: there was a free environment there, no age differences, the communication was more open, interesting and informative.

“We learned all the wine production cycles, personally engaged in harvesting. Of course, it was hard to work under the burning sun, moving the heavy boxes… But the whole process was exciting”, recalls Gohar.

She’s one of those with the highest marks who passed the first phase and got the opportunity to take part in competition for the second phase. After the successful interview, new horizons opened to Gohar to dive deeper in the winemaking and produce her own wine.

During the project, another dream of Gohar came true: during the draw, she picked the grape variety she initially wanted to work with. “I wanted to pick rosé wine from Haghtanak variety and – whether by a chance or providence – I picked this very ticket!”, says Gohar, smiling.

The wine can become a trump card for her to enter the market as only red wine has been produced from Haghtanak grape variety in Armenia so far. Thus, Gohar will become the first to have produced rosé from this variety.

“Besides, the technology we used stands out from other rosé wines by its specific delicate taste and I think wine lovers will appreciate it”, notes the young winemaker.

Gohar will enter the market with “Wine Gogh” brand. She is sure many people will associate the name with famous painter Van Gogh, however, the story is different: “Win” stands for wine and “Gogh” is short for “Gohar”, her name.

“Some art forms sometimes cross; this was also true in my case. Working with the designer we decided to feature a young lady on the wine label – and that lady is me.

Her glance is victorious, like the name of the grape variety (edit. – “Haghtanak” means “victory”), and her hair has interwoven grapes and leaves in it”, Gohar says.

“Wine Gogh” will first be enjoyed by Gohar’s family and friends. The young winemaker is committed to invest the revenue from the first batch in producing a new batch next year.

“There is a stereotype among Armenians that winemaking is the monopoly of men. However, getting acquainted with my senior female colleagues from the winemaking field I made a firm decision to gain new knowledge in this sector and achieve new heights”, says Gohar.

She notes that the Wine Incubation Project was 180 degrees move in her life. She has found herself in the field, knows what to do in future, where to invest and what to achieve.