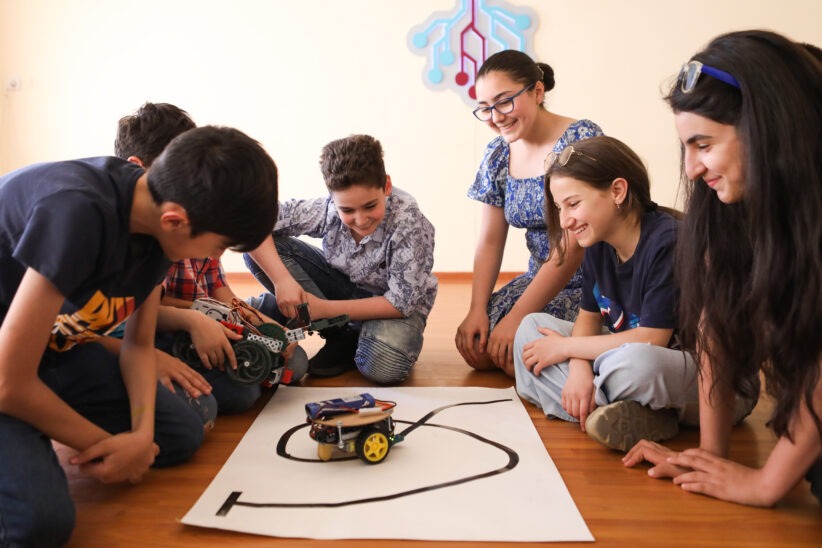 In a classroom of School No. 200 named after Leonid Azgaldyan in Yerevan around 15 schoolchildren are glued to their computer screens. One group is working on 3D modelling, and the other on coding.

Thirteen-year-old Davit is looking over a small robot with wheels.

“We spent a month and a half creating this robot. It has only one task, it was created to follow a specific path which is this route,” explains Davit.

Every other day, after class, Davit and the other students gather at the Armath lab where they learn Information Technologies, Game Development, Coding, 3D Modelling and Robotics.

“That’s my favourite moment of the day. I’m studying various subjects right now so that I can later make a decision. I have decided to focus on coding to create and develop websites. But so far, I love all the fields we are studying,” says Davit.

The Union of Advanced Technology Enterprises (UATE), based in Armenia, established the Armath Engineering Laboratories educational programme in 2011. In the labs, kids aged 10-18 are taught science, technology, engineering and mathematics.

This huge project, made in Armenia, is a beneficiary of the European Union’s EU4Digital initiative’s focus on eSkills. eSkills is one of the aspects of a wide range of actions supported by EU4Digital to harmonise digital markets and provide tangible results to citizens in the Eastern Partnership countries.

The European Union supports the implementation of digital skills strategies in the Eastern partner countries, acting to establish national coalitions for digital jobs and a competence framework for small businesses.

“The world is digitalised and it will become even more so in the future. The eSkills field is a key part, as nothing is possible in the digital sphere without skills. The first direction is exploring how the skills strategies are implemented in the country. What are the measurement indicators, and creating a common methodology for updating these skills measurements, implementing the European framework, particularly the digital component framework,” explains Māra Jākobsone, EU4Digital spokesperson for eSkills.

“The second direction was helping the country to establish a national digital coalition, which will lead to digital and skills development in the country. And Armenia was actually the first country to establish this national digital coalition back in 2017. Then, the third direction is to develop a special competence framework for SME digital skills development, and we also have training on the main digital priorities in Europe for all the countries and also promotion activities.”

For Raffi Kassarjian, the Executive Director of the Armath Engineering Laboratories, the collaboration with the EU opened up many opportunities, one of which was to present their initiative beyond Armenia’s borders.

“We’ve worked with the EU4Digital eSkills team to design a programme to actually present it in Ukraine, in Georgia, here in Armenia, as well as in Brussels. And we’ve been working with the EU to have this become a pilot programme that could be tried, at least, in some of the Eastern Partnership countries. The objective of the eSkills programme is to take a multifaceted approach to improve digital skills and the penetration of digital society in Eastern European countries. As such, a programme like this digitally enables STEM education for every primary school in the country,” says Raffi Kassarjian.

The Armenian government, especially the Ministry of High-Tech Industry of Armenia (MHTI), is the bridge between the European Union’s programme and projects such as Armath Engineering Laboratories.

“EU4Digital was officially launched in 2016, but in 2019, the MHTI, as an authorised body responsible for developing national policies and strategies in the field of high-technologies, was nominated as the coordination body for the Harmonisation of Digital Markets in the Republic of Armenia,” says Mary Zakaryan, the EU4Digital Digital Skills Network Coordinator.

“The function of the MHTI is to endorse and lead the programme in Armenia. Moreover, in the scope of the initiative, Armenia is an eSkills stream coordinator, jointly with Latvia. Since 2019, depending on the theme, the MHTI has been involving many experts from the public and private sector of Armenia, with the purpose of collaborating for the implementation of the project’s objectives. Vocational education is considered as one of the general directions in the eSkills field. In order to promote vocational education in Armenia, the MHTI designed the University-Private Sector Cooperation programme. Actually, it is a broad platform for regular dialogue between companies, educational centres and universities. In the scope of this programme about 20 courses were organised. The programme has around 5,150 alumni, 30% of whom found jobs or are undergoing internships in leading Armenian companies.” Mary Zakaryan explains.

In School No. 200 named after Leonid Azgaldyan, the children continue to work on their computers in the lab. Artyom Dadunts is the coach. He’s been working on developing the students’ skills for two years now.

“Thanks to specific programmes, children are able to understand the fundamentals of programming and coding. The first stage is the Aghves programme (the Armenian modification of the Scratch programming language). So what is programming, how do people code? Thanks to this knowledge, they are able to create their own games, their own animations. The second stage is the Kria programme (the Armenian modification of KTurtle). Kria is similar to Python and is based on Logo programming. The children get acquainted with the 3D printer and how to use it. After all these programmes, we switch to a more serious coding process, which includes the creation of robots,” says Artyom Dadunts.

For Dadunts, the difference between the traditional learning system and the Armath Lab is the pace of the learning process and the focus on practical aspects.

“As these are small groups of learners, each of the children learns at their own pace. The development through the programme is very much on an individual basis. Here, there isn’t the mandatory aspect, each child comes to the lab because they want to. In a more traditional class, the practical side is less present. You learn theory in maths, you solve the issue, but you do not apply it in practice. But here, each of the theories learnt by the students is put into practice. For example, they learn how to create current so the light turns on, they are going to put it into practice, and they will create an electric system so that the light actually turns on, and then they will use this knowledge in creating robots,” adds Dadunts.

Fourteen-year-old Lilit is trying to code so that the robot they created follows the black line of the circuit they designed. She has clearly imagined the pathway to her future. She will become an engineer.

“We are coding via the Arduino program, I’m checking that I completed the task correctly. I’ve been coming to the Armath Laboratory for two years. Since I was a kid, I’ve always loved to be on the computer and that’s why I love coding so much and not the other classes. With these kinds of skills, I will have a chance to find good work in Armenia but also abroad. I want to become a programmer or an engineer in the future, so that I can be more useful to my country. For example, I will make different types of robots, or flying devices,” says Lilit.

Besides developing digital skills at a local level, EU4Digital eSkills has offered Armenia-based companies and organisations the opportunity to share their knowledge and experience with groups from other countries.

“In the framework of the programme, there are many interesting opportunities, especially in the fields of knowledge and experience exchange. This framework provides possibilities to all parties to implement joint programmes with European hubs and foundations. In other words, the EU4Digital programme has its own broad community of professionals, which is very active. That is why even in this pandemic situation the programme keeps heading forward according to the priorly accepted timeline and agenda. Actually, many network events, webinars, study visits have been carried out by now. Particularly, on May 16-17, in 2019, the 6th eSkills Network Workshop was held in Yerevan, which brought together more than 80 experts from EU and EaP member countries. Alongside workshops and comprehensive discussions, study visits to TUMO, Synopsys Armenia, and UATE were organised,” says Mary Zakaryan.

The Enterprise Incubator Foundation (EIF) is one of the largest technology business incubators and IT/High-Tech development agencies in the region, operating in Armenia.

Since its foundation in 2002, EIF has been supporting the development of the Armenian tech and start-up ecosystem through creating a productive environment for innovation, technological advancement and company growth.

Back in April 2017, EIF participated in Startup Ole, an international tech event in Salamanca, Spain, along with thirteen other Armenian tech companies and organisations, this time with the support of another EU-funded initiative, EU4Business.

During the workshops and other events, the Armenian participants were involved in active discussions about the structure of a regional network aimed at promoting interconnected ecosystems for ICT research, start-ups and innovation in all partner countries, including interconnections between partners’ and EU innovation ecosystems – another priority of the EU4Digital initiative.

Another highlight of the event was the knowledge-sharing opportunity for all participants. They were invited to share their experiences, challenges and success stories connected with innovation ecosystems in their respective countries.

“We need to separate two things in Armenia: Information technologies (IT) and High-Tech. Currently, Armenia is mostly known for its well-developed IT sector. Now, we are trying to achieve the same success in the High-Tech sector, in such fields as Engineering and Biotech. In the framework of Digital eSkills, two directions were highlighted: Education and Digital Skills. We were involved in discussions about the issues related to education, digital skills development, our strong sides and the strong sides of other ecosystems, methods to import the best international experience to Armenia and learn from others. In addition, we had the opportunity to set up collaborations and to network. As a result, we were able to establish contacts so that an Armenian product was later successfully introduced to the Moldovan market,” notes Bagrat Yengibaryan, Director of the Enterprise Incubator Foundation.

Back in the school in Yerevan, the kids are wiring the last connections of the robot.

For Artyom Dadunts, digital skills are fundamental in the 21st century, and Armath Laboratory gives them a chance to become competitive on the market in the future.

“The lab is up to date with modern global standards. So, if the world is focused more on high technologies, this lab is also working on that. Plus, IT and high-tech are useful in all spheres, even humanitarian ones. This lab is in harmony with this century and with the wishes of the children,” he says.

With a little roaring sound, the device activates and drives through the circuit the children have created. The class is filled with cheers of joy as the lab’s little engineers can see the result of their hard work. It’s a success!

Through the EU4Digital Initiative, the European Union supports the implementation of digital skills strategies in the Eastern Partnership countries, in particular by:

The article has been prepared as part of the EU4Digital programme. The views expressed in the article are solely those of the author.

The “Criminal Side” of #ArmVote21 Candidates