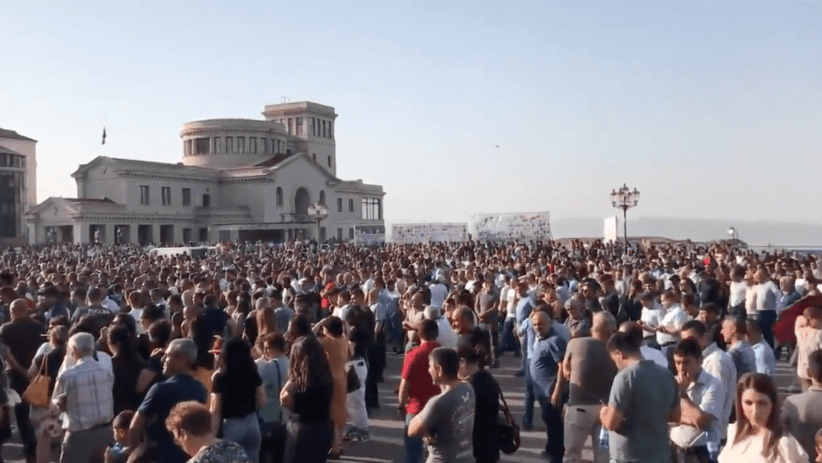 A series of rallies held in Stepanakert, Karabakh’s capital, on June 21 and 22, have highlighted the deep political tensions in the region as it tries to rebuild after last year’s bloody 44-day war with Azerbaijan.

On June 21, a day after Armenian Prime Minister Nikol Pashinyan’s Civil Contract party overwhelmingly won snap parliamentary elections, about 1,500 people gathered in Stepanakert, demanding the resignation of Arayik Harutyunyan, the president of the Republic of Artsakh.

The demonstrators on Renaissance Square, Stepanakert’s main square, were unhappy that Harutyunyan had congratulated Pashinyan earlier that day on his electoral victory. “I wish success to you and your team,” Harutyunyan said in a statement to Pashinyan. “I hope the results of the elections will enable Armenia’s authorities to strengthen the security and foriegn policy positions damaged by the war.”

Nonetheless, Harutyunyan’s apparent support for Pashinyan — blamed by many Armenians, despite his recent reelection, for his role leading Armenia to a disastrous defeat in the September-November 2020 war against Azerbaijan in and around Nagorno-Karabakh — seems to have upset many Armenians.

Among them are Mary Davtyan, former executive director of Artsakh Public TV and head of the Hadrut De-Occupation NGO, and her husband Davit Avanesyan, who have both been on hunger strike since June 21, demanding Harutyunyan’s resignation. “There is no future with this man,” Avanesyan, speaking with CivilNet, said of the de facto Karabakh leader. “He does not represent anything to the people.”

“Are we going to live in safety or not?” added Davtyan.

On June 22, Harutyunyan announced that, “taking into account the internal political tensions in Artsakh these days,” he would deliver a message that evening in Stepanakert’s Renaissance Square. “I am going to speak openly and honestly about all the main problems and solutions, from the war to the current security and socio-economic situation, from relations with the Armenian authorities to internal political developments,” he said in a statement.

Arayik Harutyunyan has served as the president of the Republic of Artsakh since May 2020. A Stepanakert native and an economist by training, he also served as the region’s prime minister for a decade, from 2007 to 2017, until that office was abolished.

In the immediate aftermath of Armenia’s defeat in the Second Karabakh War in November 2020, he lent his support to the controversial Russia-brokered ceasefire between Armenian and Azerbaijani forces, which permitted Azerbaijan to take control over all seven regions ringing the former Nagorno-Karabakh Autonomous Oblast (NKAO), as well as parts of the territory of the former NKAO itself. “If the fighting continued at a similar pace, then within days we would have lost all of Artsakh,” Harutyunyan said at the time.

The Hard Lessons and Harder Truths Some Armenians Need to Hear