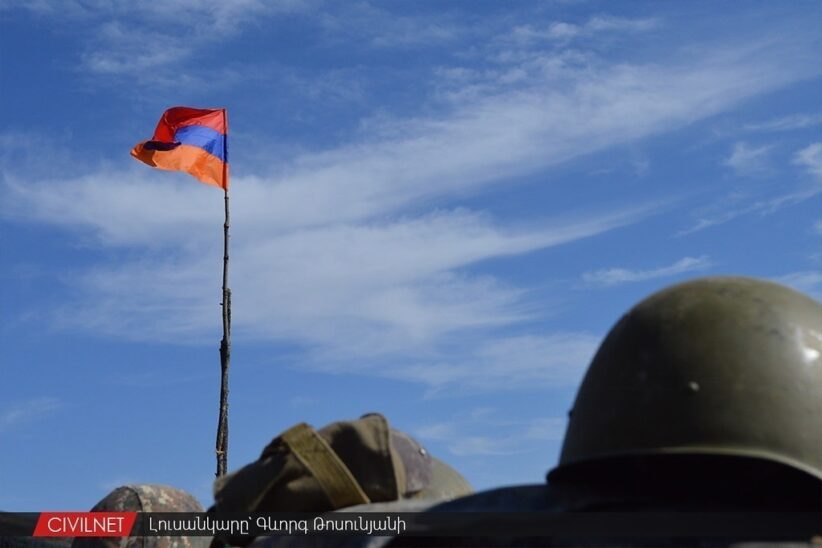 It’s impossible to get a full picture of what’s taking place in Syunik from Yerevan or from any other city․ You have to be on the ground, climb the military posts, visit the villages, and talk to the people. While on a reporting project, I traveled the entire length of Armenia’s southernmost Syunik Province, from Goris to Meghri. With Azerbaijan now on the other side, this is the reality on the ground.

We were interviewing a volunteer serviceman in a military post in one of the villages in Syunik, near the town of Kapan, when we heard shots being fired in the distance. We wrapped up the interview, and the servicemann called the commander to ask which fired the weapon. The commander responds that it didn’t come from an Armenian position. So it was the Azerbaijanis.

“The Russians will get unsettled now. They want to know who did it. They don’t allow a single shot to be fired. Even firing drills are not allowed,” the serviceman tells us.

On our way back to Kapan from the military post, we noticed a Russian border guard speeding to the frontline.

Away from this region, the general public seems to have the impression that the Russian border guards are only stationed on the Shurnukh road, which in some places passes through the territories handed over to Azerbaijan. The reality is that Russian border guards are roaming Syunik’s entire frontline. At times, the Russians find out about certain tensions and respond even before the Armenian or Azerbaijani armies.

The eight kilometers of the Chakaten-Kapan road and most of the Shurnukh-Vorotan road pass through the territory handed over to Azerbaijan. Azerbaijanis have placed the now famous “Welcome to Azerbaijan” sign on those sections of the road. We are told that a few days ago, some people from nearby villages shot at the sign, and in response, the Azerbaijani army blocked the road. The situation was resolved with Russian mediation. Since that day, a Russian border guard vehicle has been parked in front of the sign day and night.

Earlier in February, the Armenian border guards announced that any journalist wishing to travel to and film in Syunik must obtain permission from the National Security Service. So why doesn’t the government want journalists to go near military positions and speak with servicemen? I found the answer after visiting more than 20 military posts near the frontline. I saw Armenian volunteers and soldiers who with their own means are creating living and bathing conditions for themselves on the mountains. Meanwhile, the opposing Azerbaijanis have and continue to establish well-built tent settlements.

Azerbaijanis and Armenians deployed to this area at the same time, but the opponent was more prepared, at least that’s how it looks from Syunik.

Armenian volunteers and servicemen in the military positions have poor living conditions. But no matter how unpleasant, the volunteers don’t even consider leaving. They say that if they leave, the Azerbaijanis will move forward and position themselves in their place. So the volunteers stay and wait for the army to replace them. The Armenian army is in the process of setting up official military posts and deploying soldiers to the entire frontline of Syunik.

There won’t be any official news about this situation. But now, more than ever, we must be honest, raise the issues and find solutions.

Don’t underestimate the opponent and don’t overestimate us

I am from the generation that was fed a tale in which the Armenian soldier is smart and the Azerbaijani soldier is cowardly and ignorant. This short-sighted approach was one of the factors that led to our defeat.

After spending just a few days in Syunik, I was convinced that the enemy knows how to make us anxious, how to remind us of our defeat. At the moment, this is not done with weapons but with ordinary psychological tricks. The “Welcome to Azerbaijan” sign on the road is an example.

Most of the Vorotan road is now under Azerbaijani control. Once you exit that section, on the left side of the road you see Russian and Azerbaijani soldiers. Azerbaijanis have placed a fence on their side, and their flag accompanied by a soldier with a gun is always visible to both passing and arriving vehicles.

Azerbaijanis have also set up large white tents in their positions, at least four in each. Three out of four might be empty, but they try to give the impression that the area is controlled by a lot more of them than there really are.

From Meghri, a southern town in Syunik near the border with Iran, we decided to return to Yerevan not via the main road, but by the secondary one, which passes through Shvanidzor, Tsavov, and Chakaten. At the foot of one of the mountains, there is a small village, or rather a collection of homes․ There are about 50 houses and churches — all abandoned, destroyed or half-destroyed. This village is not even on the map, but it is an important reminder for everyone who passes by it that we are indifferent towards our homeland.

The villages near Kapan, especially the communities closest to Karabakh, are half-ruined and abandoned, while the natural beauty remains indescribable.

When I am told that we will bring back Kars, Ardahan, and the rest of Artsakh, these abandoned villages come to my mind. At times, it seems that those who dream of an Armenia from sea to sea cherish that dream more than they cherish what we have now.

From Terrorist Charges in Turkey to Covering the Karabakh War: A Talk with Jake Hanrahan