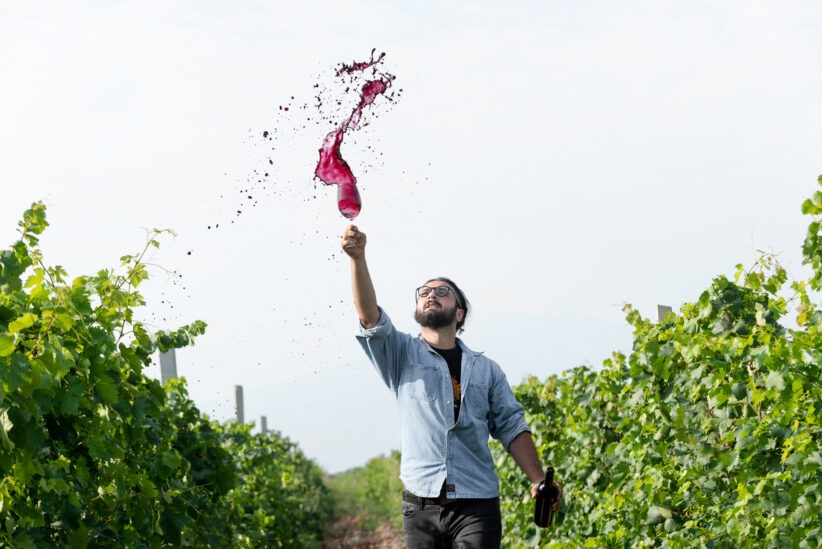 Thus, the aim of the Wine Incubation Project is to create new opportunities for persons displaced from Syria and local women in the wine sector․ As a result of the project, 6 new Syrian Armenian and female winemakers have entered the local wine market. Below is the story of Gomidas Merjanian

Gomidas Merjanian came to Armenia as a tourist in 2012. However, the civil war in Syria upended his plans and he settled here with his parents.

“My life direction changed after settling in Yerevan”, Gomidas notes. He worked at a hotel reception back in Aleppo. However, he didn’t manage to use his experience in the hospitality sector in Yerevan, as hotels didn’t employ him without Russian language skills.

“Then I started trying new wines on every occasion. Afterwards, I started studying various wines and selling them at In Vino wine bar. Once an idea struck me that one day winemakers will stop making wine and I will be left without wine, which is why I decided to produce mine, with my style, a new wine preserving the traditions”, says Gomidas.

32-year-old Gomidas notes that though winemaking is not popular in Syria their family had always produced homemade wine.

“Every summer my father bought grapes in Aleppo, laid them on the roof, squeezed them, put in a vessel and kept in the cellar”, he recalls.

In 2016, Gomidas got the chance to practice his skills at Trinity Canyon Vineyards which proved crucial for him.

“There I happened to produce a unique red wine with small quantities. However, it was consumed right away. Both my friends and parents liked it a lot and I decided to study winemaking”, Gomidas says.

In 2015, Gomidas started studying at ICARE’s EVN Wine Academy where he learned technology of winemaking, developed relevant skills and got to know the nuances of winemaking.

“After graduation I was looking for a place to produce wine in. I’ve been working as an assistant winemaker at Trinity. However, when I was offered from GIZ to take part in the Wine Incubation Project I immediately agreed as it was an excellent opportunity to start my own business”, notes Gomidas.

“The grape of Aghavnadzor vineyards in Vayots Dzor has been aged for 6 months. For this period, all the aromas and tastes of wine were revealed. If it had been aged for more the wood would prevail over the delicate taste of wine”, highlights Gomidas.

The wine will be labelled “DZON” which has a unique message.

“First, I thought calling the wine by my name. However, I then thought I wouldn’t like for people to drink wine by my name, so I named it “DZON”, meaning “dedication”, dedication to the music, poet (edit. – Komitas (Gomidas – in the Western Armenian variant – was a great Armenian musicologist, composer and poet, founder of Armenian national school of music), nature and the unique wine I produced long time ago”.

The wine has a very specific label. “Having a look at the label one cannot see one distinct image. It features four elements of the universe and other images. Every person discovers symbols in sync with his or her imagination and state of mind while looking at the wine”.

Winemaking is a lifetime goal for Gomidas now. He already purchased a one-hectare land in Aghavnadzor (edit. – located in Vayots Dzor region in Armenia) where he planted a small vineyard.

“GIZ helped me pursue my dream. I got the chance to enter the Armenian market with my wine – my style, label. And what’s more important, I acquired knowledge and skills to help develop my business. It’s crucial for living in Armenia”, says Gomidas.

In future, he wants to purchase land in Lori or Tavush regions in Armenia:

“My dream is to set up a small winery where I will receive my friends, guests and tourists and where we will dedicate songs to each other with DZON”, says Gomidas.

Building a Strong Opposition in Armenia