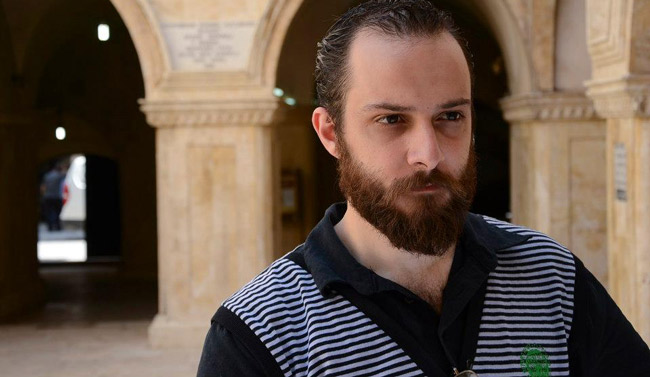 A group of Armenian artists made a call to release Syrian-Armenian film director Avo Kaprealian who is detained since November 7 in Aleppo.

Avo (Avedis) Kaprielian is a Syrian-Armenian film maker from Aleppo.

He graduated from Damascus State Institute of Dramatic Arts, Criticism and Theatrical studies department. Avo currently works as theatre director and activator for Interactive theatre projects in public schools. He also works as lecturer-instructor in History of Cinema for ACCAD Private Institute (Aleppo, Syria) and lecturer in Dramaturgy in Actors Studio courses for Directorate of Culture in Aleppo.

Avo started the first public cinema club in the city with a group of friends, and he is one of the most notable film makers in the new wave of young artists in Syria, who started emerging in the last few years. The latest project he contributed was a documentary about Aleppo Armenians called “Icon of Spirit” a few months ago.

Avo’s films usually tackle humanitarian issues. His latest film is about disabled people in Aleppo, but it wasn’t shown yet because of the difficult circumstances in the city, especially during the last four months. We knew Avo through his short film “Just two steps too”, dedicated to the legendary Armenian director Ardavazt Peleshian. He participated with this film in the 9th Golden Apricot Yerevan International Film Festival last July.

Avo Kaprealian is a bridge that connects artists and people in Armenia and Syria. We heard about his arrest in Aleppo with great sadness and fury. We are against the persecution of artists and intellectuals no matter where they live on this earth, without distinction of race, religion, nationality, etc. We demand Avo Kaprealian’s immediate release and his safe return to his family and friends.