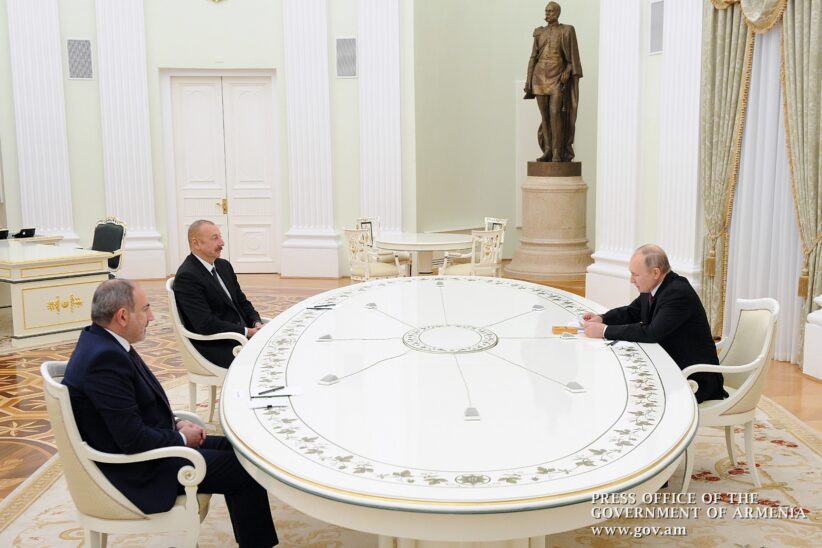 The Armenian and Azerbaijani leaders plan to meet in Moscow early next month to sign two key agreements, according to recent reports by Armenian and Russian news sites.

The news of a potential upcoming meeting between the two leaders was first reported by Aliq Media, an Armenian news site.

“On November 9, Armenia and Azerbaijan will sign two new documents in Moscow…with the mediation and participation of [Russian President] Vladimir Putin, if there are no force majeure situations at the last moment,” Aliq Media reported last Friday, citing anonymous diplomatic sources.

November 9 will be the one-year anniversary of the signing of a Moscow-brokered ceasefire agreement between Armenia and Azerbaijan that ended 44 days of fierce fighting between the two countries in and around Karabakh.

Last year’s war ended with Azerbaijan in control of broad swaths of territory previously controlled by Armenian forces, leaving over 6,000 dead, many thousands more injured, and tens of thousands displaced. It was the worst outbreak of hostilities between the two sides in over 25 years.

RIA Novosti, a Russian state-run news site, reported the next day that Aliyev, Pashinyan, and Putin may meet “in the first ten days of November” to “sign trilateral agreements,” according to an unnamed source “familiar with the situation.”

Putin’s press secretary, Dmitry Peskov, later said that “we will inform you about it in a timely manner” if a meeting between the three leaders is scheduled. The Kremlin has so far not confirmed that the leaders plan to meet.

Although last year’s ceasefire agreement ended wide-scale hostilities in and around Karabakh, tensions between Armenia and Azerbaijan remain high, and clashes between the two sides continue to break out periodically.

In the most recent incident, a shoot-out two weeks ago in eastern Karabakh left at least six Armenian soldiers injured and one Azerbaijani soldier dead, according to the two sides’ respective defense ministries.

Aside from ongoing clashes between the countries’ militaries, border and transport issues remain key stumbling blocks to lasting peace in the war-torn region — the very issues that the two agreements will reportedly cover.

The first agreement would concern demarcation and delimitation of the Armenian-Azerbaijani border. Delimitation refers to the process by which a border is legally defined, while demarcation involves the process of physically marking a border, such as by building a fence or wall, according to the Organization for Security and Co-operation in Europe.

Borders between the Soviet Union’s constituent republics, including the border between Armenia and Azerbaijan, were internal, and so officially defining them was not an issue of concern for the authorities in Moscow at the time.

The second agreement would cover the unblocking of transport connections between the two sides, including the establishment of overland connections linking mainland Azerbaijan with the Azerbaijani exclave of Nakhchivan and linking Armenia with Iran and Russia.

A pledge to unblock “all economic and transport connections in the region” was included in last year’s ceasefire agreement. Azerbaijan, in coordination with its close ally Turkey, has imposed a devastating economic blockade on Armenia for over 25 years.

Azerbaijan refers to a potential connection with Nakhchivan, which would pass through Armenia’s southern Syunik region, as the “Zangezur corridor.” The Armenian government has repeatedly pushed back against the term, saying that a connection between mainland Azerbaijan and Nakhchivan through Syunik would not constitute a corridor.

The term Zangezur refers to a historical area that covers most of Syunik and some adjacent territories.

The spokesperson for Armenia’s Foreign Ministry, Vahan Hunanyan, has denied that an Aliyev-Pashinyan meeting is scheduled to take place, saying that “the rumors spread by some circles…are clearly provocative and do not correspond to reality.”

“I want to emphasize that, at the moment, no meeting between the prime minister of Armenia and the president of Azerbaijan is envisaged,” he said in a statement.

Armenia to increase military spending by 11% in 2022

Lessons from the Lithuanian Experience for Armenia