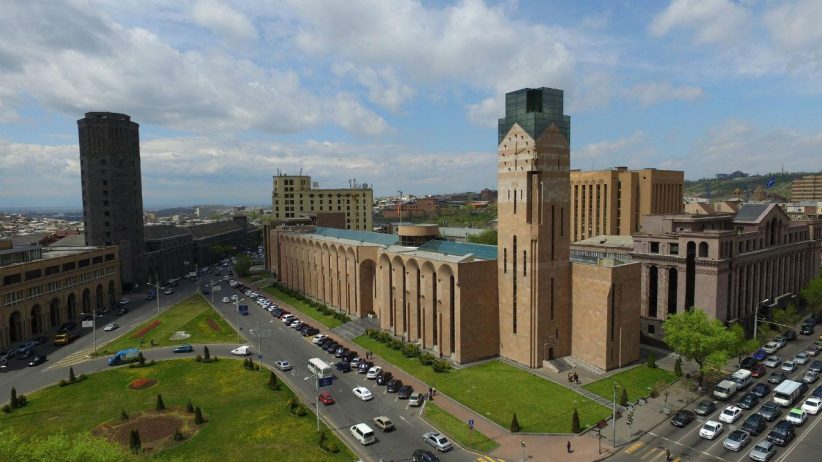 The mayor of Armenia’s capital of Yerevan, Taron Margaryan, has resigned. Margaryan made the announcement on July 9 on the official page of the Yerevan Municipality. He did not specify reasons for his resignation in the text.

Margaryan, who is a Republican Party member, has held the position since November of 2011.

According to the law, the City’s Council of Elders should elect a new mayor, the date for which has been set for July 16. If the Council fails to elect, a new election will be organized to form a new Council of Elders, which will then hold new mayor elections.

Currently, Republicans hold majority in the 65 member Council of Elders.

On July 11, Armenia’s Prime Minister Nikol Pashinyan participated in the NATO Summit in Brussels. Pashinyan had several meetings with EU leaders, as well as with heads of states, including France, Canada, Germany, Greece, and Ukraine.

Pashinyan also met with representatives of the Armenian community in Brussels, urging them to think about returning to Armenia.

The prime minister summed up the visit in a briefing with reporters where he mentioned that Armenia expects more support from the European Union, aside from encouraging statements.

In an interview with Euronews in Brussels, he touched upon Armenia’s foreign policy:

“We will stay a close ally of Russia and we hope to further develop our relations with Russia – but with NATO, western countries, the European Union and the United States as well. You will not see a U-turn in our foreign policy,” Pashinyan said.

Pashinyan announced on July 10 that roughly $42 million has been recovered in the last two months, following the discovery of hidden assets and tax evasion schemes.

After Pashinyan resumed the post of the prime minister, it has become a daily routine for the National Security Service and law enforcement authorities to uncover high-profile corruption cases. Two brothers of former President Serzh Sargsyan and their children, as well as other close friends, have not been immune to these disclosures.

On July 11, Armenia’s State Revenue Committee announced another case of tax evasion, amounting to $1.5 million. One subsidiary of the Russian-owned Gazprom Armenia, as well as seven other gas stations, had reported smaller sales numbers to avoid paying taxes.

Former Chief of the General Staff of the Armed Forces of Armenia, Yuri Khachaturov, has been summoned to the Special Investigative Service for questioning regarding the March 1, 2008 case. During the events of March 1, Khachaturov was Deputy Defense Minister.

On February 19, 2008, following a presidential election that was marked by electoral fraud and abuse of administrative resource, Serzh Sargsyan became the president of Armenia. His opponent, the first president of Armenia Levon Ter-Petrosyan and his supporters refused to accept the results of the election. The growing rallies and peaceful demonstrations were met with heavy use of force by the authorities on March 1, resulting in ten deaths and roughly 300 injured.

Armenia’s former President Robert Kocharyan has also received a notice to appear before the Special Investigation Service of Republic of Armenia regarding the killing of protesters that followed the 2008 presidential election. Kocharyan’s spokesperson Victor Soghomonyan stated that they support any disclosure on the March 1 case. He also expressed concern for legal procedures not to turn political.

The first official meeting took place between the Foreign Ministers of Armenia and Azerbaijan, Zohrab Mnatsakanyan and Elmar Mammadyarov on July 11 at the NATO Summit in Brussels.

Zohrab Mnatsakanyan underlined that there is no alternative to Nagorno Karabakh peace process. He highlighted the importance of forming an atmosphere of peace, strengthening mutual trust, taking steps towards reduction of tensions and preservation of ceasefire.

In an interview with Euronews, Nikol Pashinyan said the conflict should be resolved only through peaceful means.

“Unfortunately, from my first days as Armenian prime minister, I see that Azerbaijan is increasing its aggressiveness towards Armenia. I think that now we see the situation changing because this aggressive policy is not only against Armenia, I think it’s also against democracy because now Armenia is a democratic country,” he said.

Mnatsakanyan and Mammadyarov Meet in Brussels

In Photos… The Road to Syunik