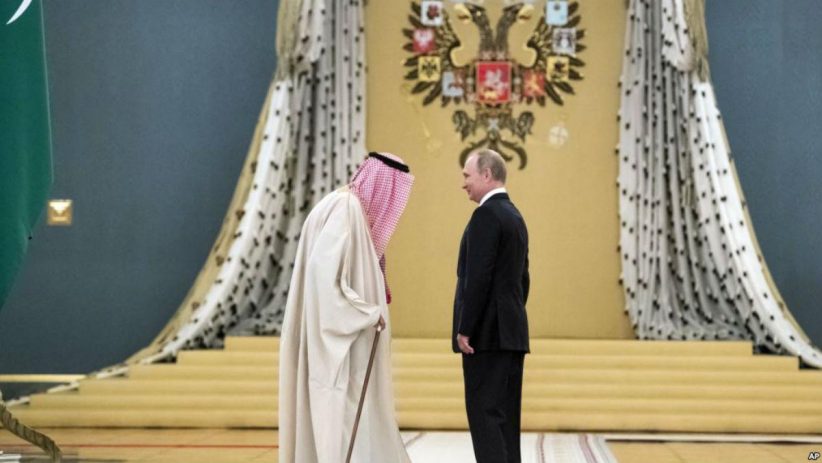 The United States is to become the world’s leading oil and gas producer, ahead of Russia and Saudi Arabia. These prospects are driving closer ties between Moscow and Riyadh. Petrostrategies, a French think-tank specializing in energy issues, analyzes Saudi-Russian relations in its World Energy Weekly (March 12, 2018 issue).

Saudi Arabia, whose Crown Prince undertook his first tour of western countries last week, presents itself to its partners as a country whose international relations have changed considerably since king Salman came to power in January 2015. The close cooperative links that it has forged with Russia unquestionably represent one of the major developments of its foreign policy.

Today, not many people know that in 1927, the Soviet Union was the first country to recognize the Kingdom of Hejaz and Nejd, founded by Abdulaziz bin Saud, which later became the Kingdom of Saudi Arabia, within its current geographic borders, in 1932. The two parties quickly forged promising cooperative ties. The USSR provided the Saudis with motor fuel and gave them medical and financial assistance, trying to detach them from the United Kingdom, as far as possible. Prince Faisal (who was to become king in 1969) visited Moscow in 1932. He was impressed by Soviet technology, especially in the oil industry.

Things changed after the mid-1930s. Obsessed with European affairs and Hitler’s rise to power in Germany, Stalin lost interest in affairs in the Gulf. Moreover, in 1937 and 1938, the first two Soviet ambassadors to Jeddah, who had forged very cordial ties with king Abdulaziz, fell victim to Stalin’s purges. The Saudi monarch was so outraged that when Stalin wanted to appoint a new ambassador to Jeddah, after the Americans discovered oil in Saudi Arabia in 1938, Abdulaziz asserted that only one of the first two Soviet envoys would be welcome…

Diplomatic relations between Saudi Arabia and the USSR were severed in September 1938. They were only re-established fifty-four years later, in 1992. In reality, until the end of the Chechnya war in 2003, Moscow and Riyadh confronted each other through proxies. In the 1950s and 1960s, Moscow thus supported Arab Socialist Republics (such as Egypt, Iraq and Syria) which directly opposed Saudi interests in the Middle-East. Between 1962 and 1970, Saudi Arabia and the USSR fought each other indirectly in Yemen, in a proxy war which led to the partition of the country. From 1978 to 1989, the Saudis provided military, financial, logistical and human support to the Mujahideen who were fighting Soviet forces in Afghanistan. And Riyadh is suspected of providing similar help, but on a smaller scale, to Chechen rebels fighting against Moscow. The degree of distrust between the two states was openly displayed in 1986, when the Soviet press accused Saudi Arabia of triggering the collapse of oil prices as part of a “plot” against the USSR. A similar accusation was made in 2014 as well…

Salman ascended the Saudi throne on January 23, 2015. Three days earlier, Houthi rebels supported by Iran had occupied the Yemeni presidential palace in Sanaa. In March, Saudi Arabia‘s new strong man, prince Mohammad bin Salman (MBS), launched the war in Yemen with the support of the UAE. In June 2015, he met Russian President Vladimir Putin for the first time in Moscow. They got on well and had several more meetings, some of them secret, it is believed.

Things changed radically after the summer of 2015. In July, the Iran nuclear deal was signed, although Saudi Arabia and Israel vainly tried to prevent it until the last minute. In September, Russia unleashed its military intervention in Syria. Moscow thus became an unavoidable player on several regional issues, such as Iran and Syria, in addition to oil.

Saudi Arabia and Vladimir Putin’s Russia grew closer while political relations between Riyadh and Washington became strained under George W. Bush (2001-2009) and then deteriorated during the Presidency of Barack Obama (2009-2017). At the same time, the rapid growth of US shale-oil production (which Riyadh vainly tried to stop by slashing prices in mid-2014) has undermined the “reciprocal security” pact which has tied the United States to Saudi Arabia since 1945. Not only do the Americans have less need of Saudi oil, but they have become competitors by increasing their oil exports.

Donald Trump’s arrival at the White House was welcomed with real enthusiasm by the Saudi court. Feeling encouraged by the new US President, Riyadh decreed an embargo against Qatar in June 2017, with the support of the UAE, once again. But under pressure from his entourage, Trump withdrew his support. Since then, the United States has been seen, even more than before, as an unpredictable and unreliable partner: yet another reason for Riyadh to get closer to Moscow.

Before Putin, since Putin

Russia took a remarkable step in late 2016, when it agreed to take part in OPEC’s effort to restrict oil supplies as from January 1, 2017. At the time, many observers emphasized that Moscow had broken its promises to reduce production in the past (1998, 1999, 2001) and expressed skepticism. They failed to mention, however, that this was prior to Putin’s rise to power and before he imposed his control over the Russian oil industry by dismantling the Yukos group in July 2006.

While Russia is cooperating with OPEC, it is protecting itself against the effects of falling oil prices by implementing a “weak ruble” policy, as most expenditures of its oil and gas companies are denominated in Russian currency. As a result, Russian drilling activity increased in 2017 (a 30% rise over 2015) and Russian foreign exchange reserves have started to increase since 2016-2017. The “weak ruble” policy was maintained even after the rise in oil and gas prices: thus, in January 2018, the Russian central bank started buying US dollars whenever it deemed necessary. Putin wants to drastically reduce the State’s dependence on hydrocarbon revenues. Accordingly, he had a provision passed in Russia’s 2018-2020 three-year budget stating that all oil and gas revenues above $40/b will be paid into Russian government reserves.

On the political front, Russia is developing its relations with Saudi Arabia without granting the latter any concessions on Syria or Iran (which Moscow defended even in negotiations with OPEC). On the contrary, although Qatar is under embargo, Moscow has invited the Emirate to acquire a significant stake in Rosneft. Conversely, Riyadh has made multiple overtures to Moscow: it supported Russia’s application to join the WTO, has stopped supporting Chechen rebels and “understood” when the Russian army marched into Georgia in August 2008.

Russia is trying to fill the void left by the United States in the Middle-East. It is also trying to escape the partial isolation caused by sanctions (Ukraine – 2014). It would like to eliminate the extremist groups which could influence its Muslim minorities. Of course, it is also trying to increase its exports, including arms sales, and attract foreign investment. The development of its relations with Saudi Arabia thus goes beyond the oil sector, while the rise in oil prices is giving its economy a considerable advantage.

Riyadh wants to diversify its partners

For their part, the Saudis want a broader choice of political and commercial partners and looser, less restrictive ties to the United States. They are not the only allies of Washington to choose such a path (Pakistan, Turkey). Their extreme animosity against Iran, an ally of Moscow, is the main obstacle to closer ties with Russia, which has offered to mediate, so far unsuccessfully.

The development of relations with Saudi Arabia is a strategic option for Vladimir Putin. In April 2016, when the meeting with OPEC in Doha failed at the last minute because Riyadh demanded that Iran should take part in limiting production, the Russian President said: “Our Saudi partners at the last minute changed their view. Our position has not changed”. He added that “MBS is a very reliable partner”…

Saudi Arabia and Russia want to develop cross investment in their respective economies. About twenty-three projects are being examined, some of them in the energy sector. Saudi Arabia’s Minister of Energy, Khaled Al-Falih, has said that relations with Russia “will last for decades and generations” (January 2018) and that this relationship “has the potential to become one of our strongest energy partnerships around the world” (February 2018). According to Putin, “Russia is demonstrating a stable foreign policy, predictability and reliability. I think that this is what attracts our partners” (January 2018).

The United States is to become the world’s leading oil and gas producer, ahead of Russia and Saudi Arabia. Under Donald Trump, it also aims to exercise “energy dominance” throughout the world. These prospects are driving closer ties between Moscow and Riyadh. However, the two capitals (and their OPEC allies) will have to find “new mechanisms” for cooperation in the oil and gas sector, as Russian companies will probably not agree to extend their production-limitation efforts beyond 2018.

The Rationale behind Armenia-Georgia Strategic Partnership

Azerbaijan’s War of Attrition Against Armenia Will Be Long-Term