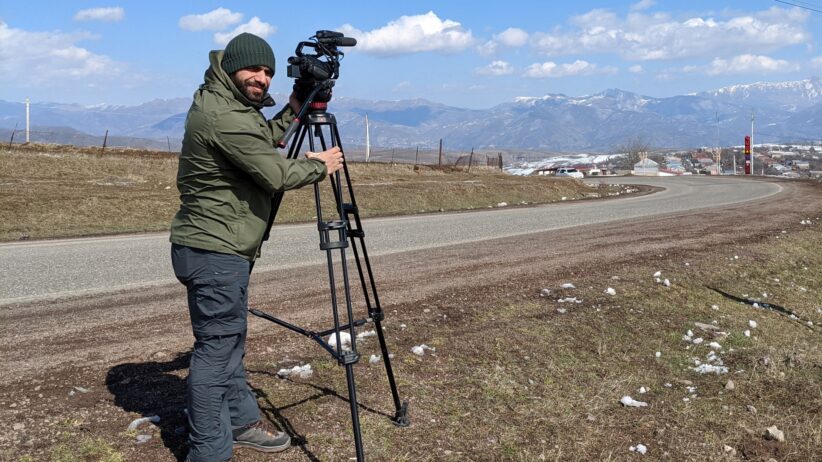 For the entirety of the 44-day war, Civilnet had its teams throughout Artsakh. Videographer and photographer Gevorg Haroyan shares a segment of the Karabakh war that he witnessed in the Martuni region’s Gishi village, where a school was converted to a hospital to treat civilians and soldiers who came under heavy shelling.

I was sent to Artsakh with a journalist and a photographer from the US, Michael Krikorian and Ezras Tellalian, respectively. I was recording alongside them. In the Gishi hospital, there was an Armenian doctor from Glendale, Aleksandr Gevorgyan. We went to interview him. The soldier guarding the hospital did not allow filming inside.

“Brother, I understand that you have been given orders to not let anyone inside, but please tell me how I can get permission from someone,” I said. The soldier points to Vilis [Russian jeep UAZ, locally called Villis], the commander—only he can give that permission. I approach the jeep and explain who I am, what I do, and ask if he would let me inside. He says that I can enter but without a camera. In the end, the interview was done only in text.

While Michael and Ezras interviewed the doctor, I decided to go around the hospital and see what was going on. During the war, people constantly said, “It’s all a mess, everything is disorganized.” It seemed to me that I would see this in the hospital, too.

Whatever I expected to see, I saw the exact opposite. The road to the school was chained-off, as if locked, with two soldiers posted next to it. With their automatics in their hands, they guard the hospital. Three others are waiting at the door for vehicles carrying the wounded. Two of the three boys are muscular and built, like in a movie. Vehicles line up, the third boy, who was smaller in size, runs to quickly open the door while the two others run to carry in the wounded.

As soon as they entered, a doctor quickly triaged the wounded and had them transferred to the appropriate section of the “hospital”.

At this point, a girl would approach with a notebook and, if the soldier was conscious, would ask for personal information and record it.

A scene passed before my eyes that, if I were to have seen it in a film, I would have said the director was being a bit gratuitous.

A wounded soldier, certainly a conscript, was lying there. He was almost completely naked, only his genitals were covered with a towel. The boy was wounded in a few places with seemingly fracture wounds. A 20 to 22 year-old girl was at his side. It was evident that the girl had previously never seen a naked boy. She soaked a cloth in a bowl and cleaned the dry blood off of the boy’s body. That scene lasted only a few seconds, but it is etched in my mind. I wished that I at least had my Fuji camera, but I did not bring it. What a shot I lost!

All of this took place in a school corridor, in a school environment, where a picture of Mesrop Mashtots hangs on the wall along with the words, “To know wisdom and instruction…”

I thought that perhaps there were boys who graduated from this school just a few months before the war. Who would have thought that they would return to the same school, wounded and fighting for their lives?

I stayed in the hospital for about forty minutes. People were working like bees.

One vehicle stopped in front of the hospital. They opened the doors and I saw that there was a person inside, but they closed the doors. Perhaps they had already died.

The drivers’ work, too, was exceptional. They were also between 18 and 20 years-old.

One of them recounted how the wounded would made it to the hospital. He and the doctors would go to an area that had been shelled, get out of the car, and shout, “Are there any wounded?” And like that—if there were a wounded soldier, they would put him into the vehicle quickly and transport them to the hospital.

I think there should be a film about the drivers and the doctors in this war. Those who are faithful say, “God gave sight to the blind, and life to the dead.” I have not seen that God, but in this war, I have seen doctors, who do precisely that. And one would think that they were also gods.

Read this piece in Armenian.