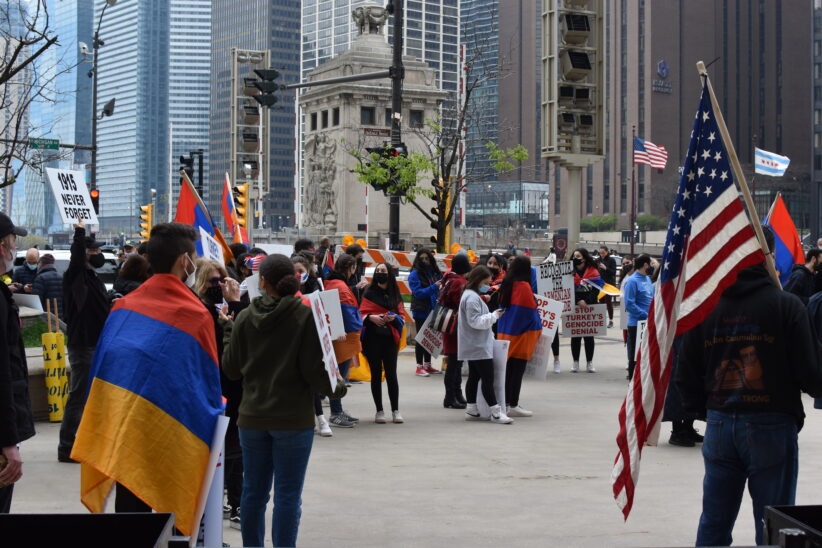 Over fifty people braved rainy, overcast weather this morning and gathered in front of the historic Wrigley Building in downtown Chicago to commemorate the Armenian Genocide and demand justice for victims and their families. Among other slogans, the demonstrators chanted, “1915 never again,” “shame on Turkey,” and “Armenians united will never be divided.”

Meanwhile, in Washington, D.C., President Joe Biden made history by becoming the first U.S. leader to formally and officially recognize the genocide. In a statement, he said, “we remember the lives of all those who died in the Ottoman-era Armenian genocide and recommit ourselves to preventing such an atrocity from ever again occurring…The American people honor all those Armenians who perished in the genocide.”

Previous U.S. leaders opted for other terms and euphemisms, such as the Armenian-language phrase Mets Yeghern (meaning “the great calamity”), out of fear of alienating Turkey, a key NATO ally. The U.S. House of Representatives and Senate both voted to recognize the genocide in 2019.

106 years ago today, the Ottoman government rounded up roughly 250 Armenian community leaders and intellectuals in the capital of Constantinople and deported them, marking the start of what would become the Armenian Genocide. In the years that followed, an estimated 1.5 million Ottoman Armenians would be slaughtered, while survivors and their descendants dispersed around the world.

Armenian communities the world over mark April 24, also known as Red Sunday, by staging rallies commemorating the genocide and urging governments to recognize the killings as such. Over 30 countries around the globe — now including the U.S. — officially recognize the Armenian Genocide.

The Turkish government acknowledges that massacres took place, but denies their scale and that they were systematic and premeditated. The overwhelming majority of mainstream historians reject that argument and recognize the killings as genocide.

How the World Responded to Biden’s Armenian Genocide Recognition