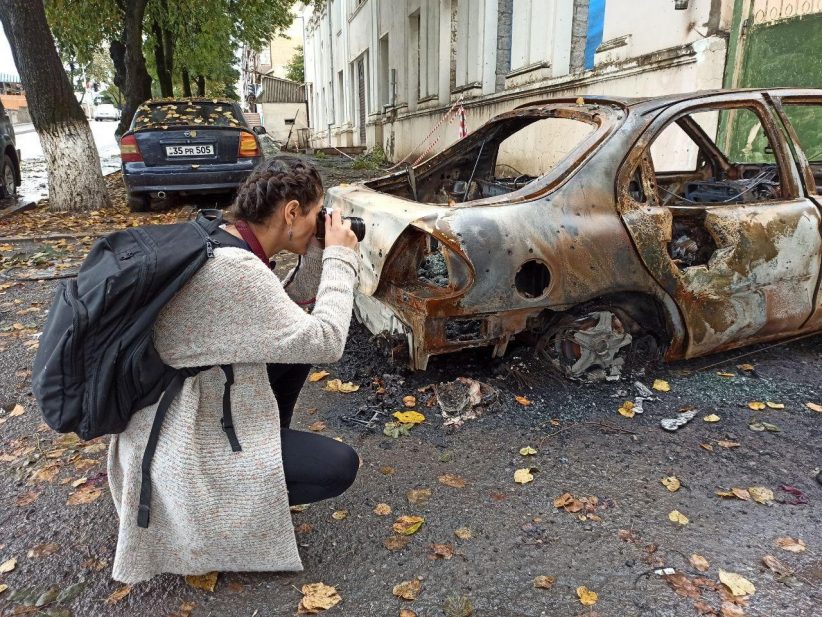 Stepanakert was not bombed, at least that is how it seems so far, since i’m still in the bunker.. The drones flew, fell, but I did not hear talk of victims. The weather was great today, but it was scary to go outside. Sometimes, it feels like I will never be able to go out into the street.

I woke up at midnight because I couldn’t sleep all night from yesterday’s heavy bombing. We can already distinguish the sounds – when it’s a Smertch, when it’s a drone, when it’s cluster bombs, and when ours hit the drone. It is very sad that we can all distinguish this. But what can we do? This is our reality today.

I learned that yesterday in Hadrut city, an Azerbaijani sabotage group entered people’s house, killed a mother and her son, who, by the way, is a person with disabilities… I can’t find words to express what I think about this … I was in Hadrut a few days ago, filming people in the shelters. There was a boy with disabilities, very cute, he wouldn’t stop hugging everyone, and everyone was angry with him because of this. I talked with his mother, a very nice woman. There is a video of her talking. Now I think, maybe this is all about them? .. Just thinking about it can make you crazy. I don’t dare ask my friends from Hadrut.

I keep track of days only when I am going to write the day’s post. We rarely look at the clock. It seems that for half a century I have not gone to the office, have not cooked vegetarian pizza, have not eaten Nutella on a crepe, and have not seen children in the city.

Today a friend suggested saving all this as an archive, like Anne Frank’s diary. We decided to do so and call it a diary. It helps to dispel the fear, thanks to a friend for the idea. In a few years, we’ll watch and read, tell the children and grandchildren.

I miss my everyday life when my relatives were near. When my friends were near.. My friends in Yerevan invite me to go and rest there a little. To be honest, I would gladly put my head on their lap and cry for hours. But we do not allow such luxuries. I will wait to cry and laugh together in our beloved city.