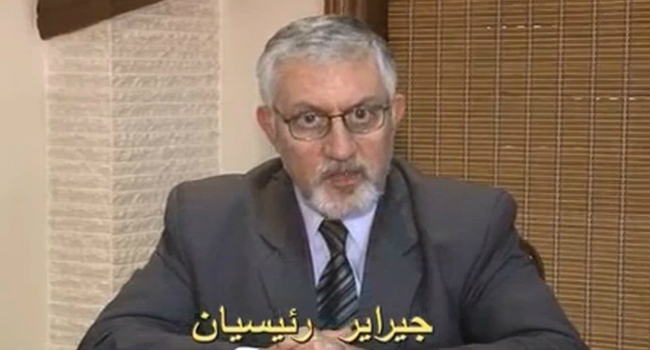 For the first time since the start of the Syrian uprising in mid-March 2011, the spokesperson of the Armenian community of Aleppo Jirayr Reyisian has issued a direct videotaped message. Distributed on April 19, it purports to express the position of the Armenian community regarding the ongoing events in Syria, in an attempt to bring clarity to doubts and questions over how Armenians in Syria position themselves amidst the Syrian turmoil.

In the midst of the events in Syria going on for more than two years, we have been sincere and clear in our statements, messages and our assessment of the situation. However, due to the development of events and the questions which have arisen, we were obliged to affirm what we have repeatedly affirmed, hoping bringing more clarity and supporting the good efforts to bring an end to the plight of the country and the citizens.

First, we affirm that the security of the country and the citizens heads the list of priorities.

Third, dialogue is a noble virtue and a civilized manner to reach the much desired solution, while violence only generates more violence.

Fourth, the Syrian army is a shield to protect the homeland and the citizen from any danger that threatens them. The people of the same country are brothers and partners in building the country and its growth. That is for the good of everyone and no one is superior to another based only on the extent of their devotion.

Fifth, the unity of the country and its people is a value of a civilization that Syria was characterized by throughout history. Let’s preserve it hand in hand with strong determination.

Sixth, we decide our future by freedom, with absolute national sovereignty, with an honest and realistic overview, starting with observing the negatives and ending with achieving a bright future.

This is our path, and this how we must continue our way into a future, which can satisfy and suit all of us together.

May peace be upon you.

(Read the story in Armenian here)