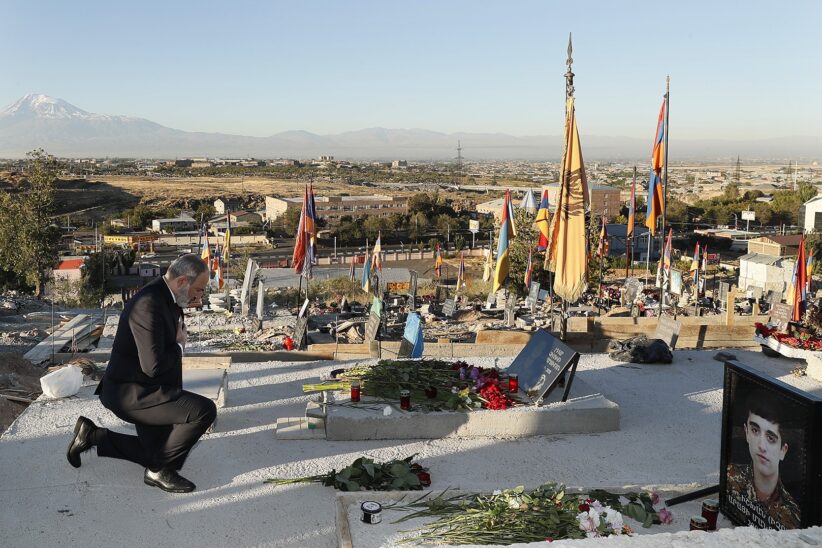 On the first anniversary of the outbreak of the Second Karabakh / Artsakh War, Armenian Prime Minister Nikol Pashinyan did not address the nation. If he had, what would his message have been? Here is my imaginary version.

Today is September 27, the anniversary of the outbreak of the Second Karabakh War. A war that cost us more than 4,000 lives. Hundreds of boys are still missing. Dozens of prisoners suffer in Azerbaijan’s prisons. I thought those boys would forgive us for remaining “a month or two longer” in captivity. But the months pass and they do not return. We do not have clear information about their numbers or condition. Sometimes, when our boys do return, they are accompanied by the bodies of other prisoners.

One year later, many questions remain unanswered. More than 2,000 cases of crimes committed during the war are being investigated.

The truth is that we lost the war because of the enormous amount of corruption in the country and in the armed forces, and because we had been deceived by myths about our boundless power – a myth that I myself believed.

There are many questions that need answers in order for us to understand the reasons for Armenia’s defeat. As a society, as a state, as a nation, we must try to find the answers to these questions and prevent the recurrence of such a calamity in the future.

Did I comprehend the full complexity of the Karabakh conflict after taking office in 2018?

In the post-revolutionary euphoric environment, I failed to understand the existential significance of the Karabakh issue for our state and our people. My pronouncements that “I began the negotiations from my own personal starting point”, and that “we are negotiating for whatever we want”, that “the settlement of the Karabakh conflict must be acceptable for the people of Armenia, the people of Artsakh and the people of Azerbaijan” had no analytical basis and were simply my heart’s desires.

I naively believed that I had taken unprecedented and clever steps. I did not understand the tremendous diplomatic work carried out by my so-hated predecessors. They, in fact, had worked to reach a basic negotiation principle, which was the realization of the right of the people of Nagorno Karabakh to self-determination through the free expression of their will.

At that time, I was only guided by my rejection of everything that came before me. Since the day I came to power, those who were in power before me constantly accused me of selling out lands, realizing very well the fatal state of the Karabakh negotiations. I swallowed that bait, which resulted in the hopeless statement “Artsakh is Armenia. Period.” Another one of my obvious diplomatic failures was the primitive Munich debate, in which I participated without properly doing my homework.

Today, I am struggling to answer this question: Could I have prevented the war?

I do not know. Perhaps. But at the very least I should have tried not to bring war closer to us.

I naively thought that “the victorious battles in July 2020 proved that there is no military solution to the Karabakh issue“, that “we will have a new war, and new territories“, that “Turkey will not interfere“.

My other question is this: Could I have stopped the war?

I thought that “we’d be able to break the enemy’s backbone“, and then I did not dare stop the war so that “people would not say ‘Nikol, traitor’“.

It’s true that I did not have the courage of a leader at a time when many people and many things could still be saved.

I regret all of this. I truly do.

I used to say “Artsakh is Armenia. Period.” but one year after the war, Armenia’s leader can no longer set foot in Artsakh. This is the harsh reality.

To the relatives of the dead, the missing, the captives, the wounded:

I understand the impossibility of what I ask, but please forgive me.

*All phrases in quotes are excerpts from Pashinyan’s statements of the last three years.