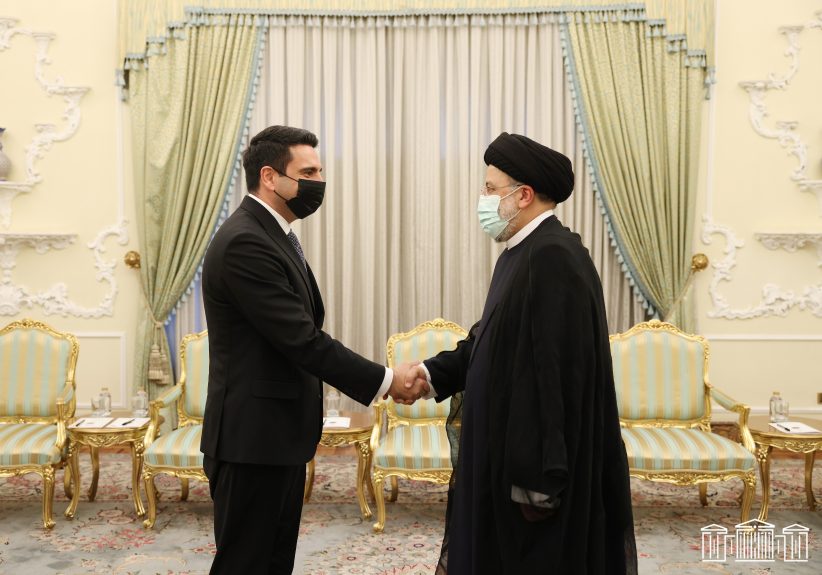 “For our friends, we are friends even on difficult days,” Raisi told Simonyan, according to an Armenian government read-out. “On happy days, everyone can be by everyone’s side, but real friendship is shown in times of difficulty.”

The two officials reportedly talked about expanding Armenian-Iranian cooperation in a number of fields, including energy, infrastructure, transport, and trade. Simonyan also briefed Raisi on Armenia’s ongoing normalization efforts with Azerbaijan and Turkey. Iran shares a border with all three countries.

The day before, Simonyan met with his Iranian counterpart, Mohammad Bagher Ghalibaf, to review the prospect of greater legislative cooperation between Armenia and the Islamic Republic.

Simonyan’s visit comes just days after Armenian Prime Minister Nikol Pashinyan called Iran “a friendly country for us” in an interview with Al Jazeera, noting the importance of a free trade agreement between Iran and the Eurasian Economic Union.

The Eurasian Economic Union is an organization that aims to integrate the markets of Armenia, Russia, and three other post-Soviet countries. Armenia is the only member state that borders Iran.

Armenia and Iran share millennia-old historical and cultural ties, and relations between the two modern countries remain warm. Tehran is one of Yerevan’s main economic partners, with trade topping half a billion dollars last year.

Iran is also reportedly planning to establish a consulate in Kapan, the largest city in southern Armenia.