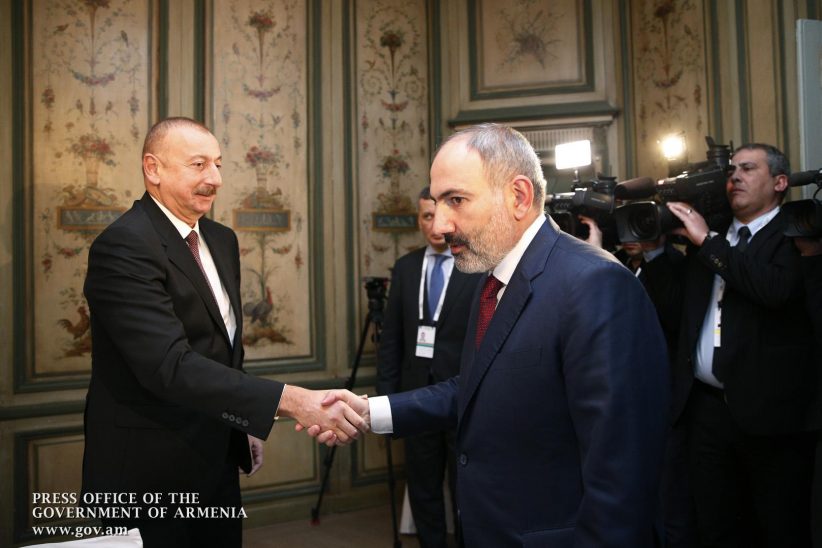 The deadly fighting along the Tavush-Tovuz section of the Armenian-Azerbaijani border, which started on July 12, once again turned the spotlight on the Nagorno-Karabakh conflict. After 3 years of relative calm on the frontline, we are now witnessing the biggest escalation since April 2016. At time of writing this, four Armenian and twelve Azerbaijani servicemen have been killed in combat. Azerbaijan’s casualties include a general and a colonel. Multiple reliable sources report that the Armenian Armed Forces took control of a strategic position near the villages of Chinari and Movses in Armenia’s Tavush region.

These unexpected losses on the battlefield sent shock waves through Azerbaijan. On July 14, tens of thousands of protesters flooded the streets of the capital city of Baku, demanding President Ilham Aliyev sack high-ranking officials in the military and launch a large-scale offensive on Karabakh. The pro-war demonstrators chanted anti-Armenian slogans for hours and even broke into the parliament building, they were eventually dispersed by riot police. Aliyev’s long-serving foreign minister Elmar Mammadyarov, who many saw as on his way out, was scapegoated the next day and dismissed by the president. Baku then sent a special forces unit to recapture the lost position but failed and reportedly suffered more casualties. Amid these chaotic developments, the spokesman of Azerbaijan’s Defense Ministry threatened to hit Armenia’s nuclear power plant, causing outrage in Yerevan.

This latest outbreak of the conflict signifies the end of the period of false hopes and illusions regarding the Karabakh peace process which lasted for about two years. in September 2018, Armenia’s newly elected Prime Minister Nikol Pashinyan and Azeri President Ilham Aliyev met for the first time on the margins of the CIS summit in Dushanbe. During this meeting, the two leaders agreed to reduce tensions on the frontline and establish a direct line of communication between their militaries. In the following months, the official rhetoric of both sides significantly softened and the ceasefire regime was maintained. The parties to the conflict also acknowledged the need to prepare the populations for peace and even took some symbolic steps in that direction.

However, it was clear from the very start that both leaders used this process to achieve very specific objectives. After taking office in May 2018, Pashinyan desperately needed time to consolidate his power inside the country and implement crucial reforms in the army. Aliyev’s purpose was to imitate a constructive stance against the backdrop of the democratic revolution in Armenia, show that he is willing to engage in meaningful peace talks, and then put the blame for the lack of progress in the negotiation process on Armenia. The ruling elite in Baku also naively hoped that Armenia’s new government would be more inclined to make unilateral concessions.

But as time passed, it became obvious that all the fuss about the rebooted peace process was massively overstated. Baku viewed the negotiation process as a means of legitimizing its future violent acts. Yerevan in its turn was not going to cross any Armenian red lines. That is why the latest escalation was quite anticipated. Ilham Aliyev himself denounced the peace process and slammed the Minsk group on July 7, threatening to use military force. The skirmishes on the border are a direct corollary of his statements. Azerbaijan decided to readopt its policy of “military diplomacy,” which was abandoned in 2017. The objective of that policy is to make Armenia more flexible when at the negotiating table by resorting to small-scale and controlled escalations on the frontline.

Substantive negotiations are impossible in an environment where Azerbaijani officials threaten Armenia with a nuclear holocaust and thousands of people demand war in Baku, chanting “Death to Armenians.” The society and the government of Azerbaijan should get off the vicious circle of hatred and Armenophobia.

This tactic will hardly yield positive results for Baku. Both Armenia and the NKR have learned their lessons from the April War of 2016 and have since implemented thorough reforms to strengthen their security infrastructure. The entire frontline in Artsakh and along the Armenian-Azerbaijani border has been equipped with cutting-edge surveillance technology which gives the Armenian side the capability to detect and prevent even small incursion attempts. Armenian Armed Forces are also much better at coping with the UAV threat. But most importantly, for the first time in more than 25 years, Armenia has a government which is legitimate and enjoys an unprecedented level of popular support. That is why Nikol Pashinyan has more room to maneuver. And as the latest developments have shown, if there is a provocation on the frontline, he won’t hesitate to retaliate.

The escalation in Tavush and Baku’s intention to implement its policy of “military diplomacy” will make the prospects for peace even bleaker. The Armenian side won’t be coerced into making unilateral concessions. Substantive negotiations are impossible in an environment where Azerbaijani officials threaten Armenia with a nuclear holocaust and thousands of people demand war in Baku, chanting “Death to Armenians.” The society and the government of Azerbaijan should get off the vicious circle of hatred and Armenophobia. Let’s not forget that the exact same demands and chants in Baku 30 years ago triggered the war, which created the current status-quo. The mistakes of the past should not be repeated.

Tigran Grigoryan is a political analyst from Nagorno-Karabakh. He holds a Master’s degree in Conflict, Governance, and International Development from the University of East Anglia.