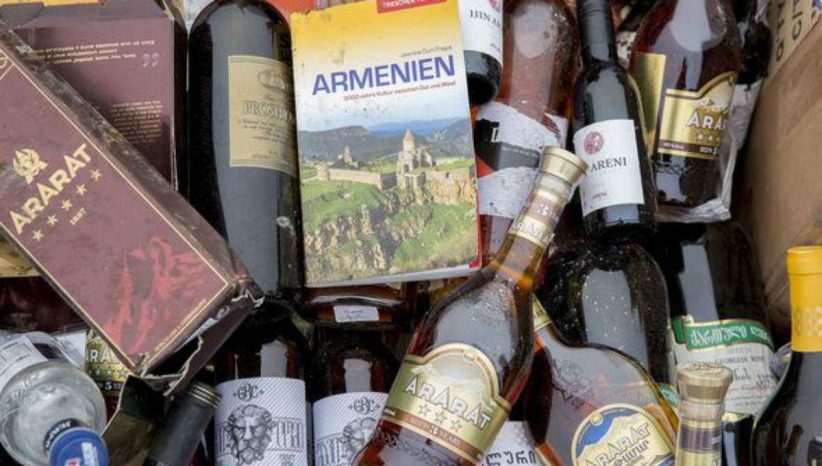 In late February, Azerbaijani media reported that the State Customs Committee of Azerbaijan had destroyed significant amounts of products from Armenia.

In accordance with a court ruling, mobile phones, Armenian cognac, foodstuffs, household items, cigarettes and souvenirs were burnt in front of journalists and cameramen, in a landfill near the Azerbaijani city of Sumgayit.

But how did these products end up in Azerbaijan?

It is believed that many of these items reach Azerbaijan via foreign tourists traveling through the South Caucasus region, which includes Armenia, Azerbaijan and Georgia. Many of these tourists recounted that they would bring Azerbaijani products into Armenia, but would rarely be confronted by Armenian customs officers.

Recounting his own experience with Azerbaijani authorities confiscating Armenian products, Civilnet reporter Tatul Hakobyan mentioned that during a book presentation he did in Tbilisi in 2014, an Azerbaijani journalist bought one of his books about Nagorno-Karabakh.

Once the Azerbaijani journalist reached the Georgian-Azerbijani border, the book was marked as “extremist literature” and was confiscated.

Hakobyan said that later when researchers and journalists in Azerbaijan wanted to obtain his books, he would send them to Baku with European or American friends who were traveling to Azerbaijan by plane.

But were Azerbajiani authorities always so strict about preventing Armenian products entering Azerbaijan?

Hakobyan remarked that before 2003, when Ilham Aliyev took over the presidency after the death of his father, President Heydar Aliyev, Armenian-made products were commonly transported into Azerbaijan by merchants and openly sold in a Georgian-Armenian market in the Azerbaijani-majority town of Sadakhlo, just across from the Armenian border.

Furthermore, prior to 2003, carrots and cabbage from Sevan or Spitak were also sold in Azerbaijan, and Azerbaijani tea was sold in Stepanakert until the 2000s. To this day, pomegranates from the Azerbaijani city of Ganja are in high demand in Armenia.

During a recent presentation on the history and conflict of Karabakh, Hakobyan was asked by representatives from tour agencies how they should respond to foreign tourists who are on Transcaucasian tours and want to buy Armenian products? Should tour guides warn tourists that there is a likelihood that Armenian cognac or souvenirs may be confiscated or destroyed once they cross into Azerbaijan?

Many of these tour guides noted that they wanted to encourage tourists to buy Armenian-made products, but weren’t sure whether they should inform tourists that these products may well not make it out of Azerbaijan.

The tour guides informed Hakobyan that it was foreign tourists who were bringing Armenian products into Azerbaijan.

The tour guides also implored Hakobyan to write about this issue so that Armenian authorities could be informed of this dilemma and seek a possible solution.

Hakobyan remarked that this raises the issue of anti-Armenian sentiments and how far fetched a peaceful reconciliation between Armenia and Azerbaijan is, when not even Armenian products can enter Azerbaijan, in the custody of tourists, without being confiscated or destroyed.

Hakobyan suggested that it is time to start real attempts at Armenian-Azerbaijani reconciliation and that interfering with trade and tourism is a futile exercise.