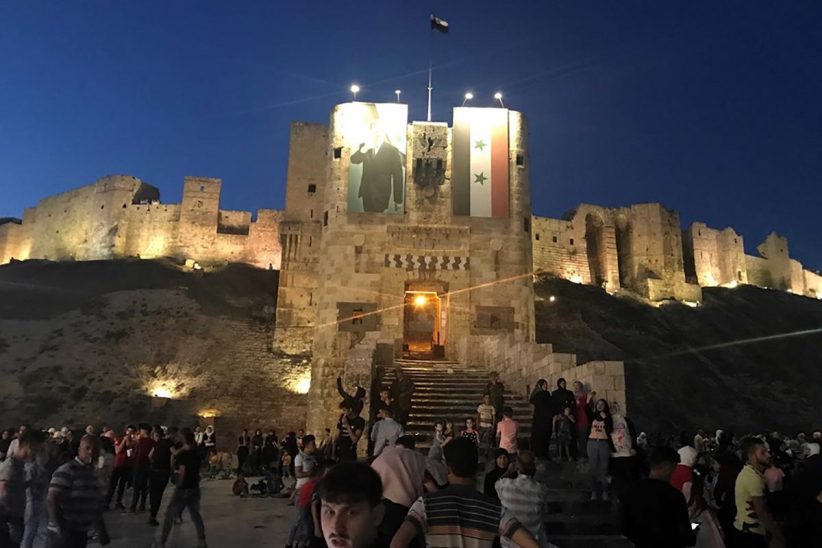 In a scene from the movie “No Man’s Land” (Danis Tanovic, 2001), one of the fighters guarding the trench lines in the war-torn Bosnia-Herzegovina in 1994, is reading a newspaper when he exhales a deep sigh. When asked by a fellow fighter what was the sigh about, the response of the first fighter is “what a mess in Rwanda?”

This scene captures the essence of human perception of life when the daily life that one lives in—no matter how difficult and war-ridden it is—becomes “normal”, even though when looking from outside, that same life would be horrific and full of challenges (including the challenge to live).

The Syrian Civil War, which has been raging for over eight years has fundamentally altered the demographics and modus operandi of the citizens in that country. While some Syrian cities have returned to relative “normalcy”—in the northern city of Aleppo, life is far from being what it was before the city spiraled into street-to-street and house-to-house fighting for over four years (2012-2016).

In a recent (July 2019) research trip to Syria’s most populous city (at least until the beginning of the civil war), Aleppo, the realities of life in a city still recovering from war and still under the threat of daily rocket fires and car bombs, highlighted the difference between how civil wars are covered in the media and the realities of life on the ground

On the paved highway from Syria’s southern border with Lebanon, the trip to Aleppo takes over 200 miles (330 kms) and it passes through the central part of Syria. The terrain, which is mostly desert-like, is occasionally dotted with villages and small towns that are thriving since that highway became the major artery connecting Aleppo and northern Syria with the rest of the country. On both sides of the road, there are also frequently seen burnt out trucks or cars (more often than not upside down or on their side) in case a traveler tends to forget that the country is free of conflict. Eight years ago the same journey would have taken 130 miles (220 kms) and would have passed by the cities of Homs, Hama and Idlib (the latter now being the nexus of anti-government opposition groups and fighters of all shades).

The journey above also takes travelers through Syrian Army checkpoints, which in July 2019 numbered at around 30 on the road/highway leading from the Lebanese-Syrian border to Aleppo. Most of the checkpoints function as a supplementary income generator for the troops who live on a meager salary of approximately $100/month. As one gets closer to the Lebanese border and to areas closer to the conflict, the nature of the checkpoints change drastically as those manning them are keen to check identification cards of passengers than to receive pocket money.

Entering Aleppo from the southeastern part of the city (where the city’s inoperative airport is located), one does not get a sense that the city was (and still to a large extent is) a war zone. Only after getting to the center of the city that the scars of the war are revealed. The old city center—including the famed Aleppo Citadel and the Umayyad Mosque (both UNESCO heritage sites)—is where most of the fighting between rebels and Syrian Army took place. Throughout the battle of Aleppo, the Citadel was in the hands of the Syrian army and was encircled by rebel forces. The Syrian army used underground tunnels to supply its garrison in the Citadel and the neighborhoods around the castle were decimated.

All of the above would not be on anyone’s mind while taking a stroll around the Citadel on a Friday evening. Thus, just like the old days, many Aleppines spend their evening around the citadel drinking coffee or tea, blowing smokes form their hookahs while children run around with balloons and other toys that street vendors are more than eager to sell. Some families would bring their own carpets and finding a free space around the Citadel, would have an impromptu picnic. All of this under posters depicting Syrian President Bashar al-Assad and Russian President Vladimir Putin or ones showing Syrian and Russian soldiers in full gear standing facing away from each other, clearly articulating “Russia is backing us”.

The message is not subtle, after eight years of continued fighting, the Syrian regime has managed to maintain its control (at least over most of the country) with the active and supportive help of Russia. In stores that prepare flags and insignia, Russian flags seem to be the most popular, of course after the Syrian one, which most stores and houses are eager to display to show their unwavering loyalty to the regime.

Similar to posters depicting Russian-Syrian friendship, there are also many banners glorifying the role that the Lebanese Hezbollah played in the conflict. Many streets in Damascus, and to lesser extent in Aleppo and other government controlled cities, pictures of Hezbollah’s leader Hassan Nasrallah along with the Syrian President highlight the friendship and comradery that the two have.

Russian troops are not the only non-Syrian military presence in the country. Turkey has pushed its borders and the limits of its influence to practically control large territories in northern Syria, and there are American bases in the Kurdish controlled northeastern part of the country. Other than official troops, foreign fighters in Syria come in different shades and colors and are supported by various groups. The highest concentration of these groups is currently in and around Idlib in central Syria. One high ranking soldier in the Syrian army referred to it as “Kandahar” because of the large number of foreign fighters there.

In this backdrop, life in Aleppo is a bizarre mix between “normal” everyday life and the pressure of an uncertain future. The city’s demographics has changed significantly as there are many people from Aleppo’s neighboring villages and towns flooding into the relative stability of the city. Many of these individuals, who do not have any job trainings, work as taxi drivers or manual laborers. It is not uncommon that when hailing a taxi, the driver would ask the passenger(s) for direction to their destination, even if the destination is a well-known neighborhood or landmark in the city.

There is nothing unique about what is happening in Syria today. For a long term observer, the situation was the same in Lebanon, Iraq, or former Yugoslavia (or any other war-torn country). The common denominator in all these situations is the large discrepancy between the way these regions are depicted in the world media and the daily life observed on the ground. War does not necessarily halt the life of individuals living in conflict, rather it alters the way that life is conducted, albeit with rearranged priorities.

The almost daily shelling and explosions in the city, make the future more uncertain for Aleppo’s population. The rockets fired from Idlib, or the Turkish Army’s shelling of the Kurdish section of the city are supplemented by the occasional car bombs in various parts of Aleppo. Many Aleppines are eager, but unable to sell their properties and find a ticket out (literally and figuratively) of the country. Granted Aleppo is not a prime real estate market these days but a combination of uncertain future and the plummeted real estate prices has forced many people to rather stay in the city and generate as much income as they can, than to leave to the relative safety of neighboring countries (mostly Lebanon and Turkey) or find refuge in the West.

In one overheard conversation, four elderly men were taking about a fifth person they knew and they were analyzing how that person has managed to sell a machine shop he had for 35 million Syrian pounds (roughly about 70,000 USD in today’s exchange rate). The consensus was that the price was very good, without realizing that just five years prior, the price that the shop would have fetched would have been ten times more that amount. This is yet another example of how “normal” constantly changes in a society functioning under war conditions.

For anyone who knew Aleppo before the war, there are many elements of the city today that remind of the old days. The smell of the bazars (the ones that are at least standing), the yellow colored taxis zooming around the city with little respect to traffic rules (some things never change), the friendliness and helpfulness of strangers and the smell of spices and fool (stew-like dish made of fava beans). While for a visitor, these are remnants of old Aleppo that trigger nostalgia, for most of Aleppo’s population the feelings that they associate with their city is hopelessness, grief and an uncertain future.