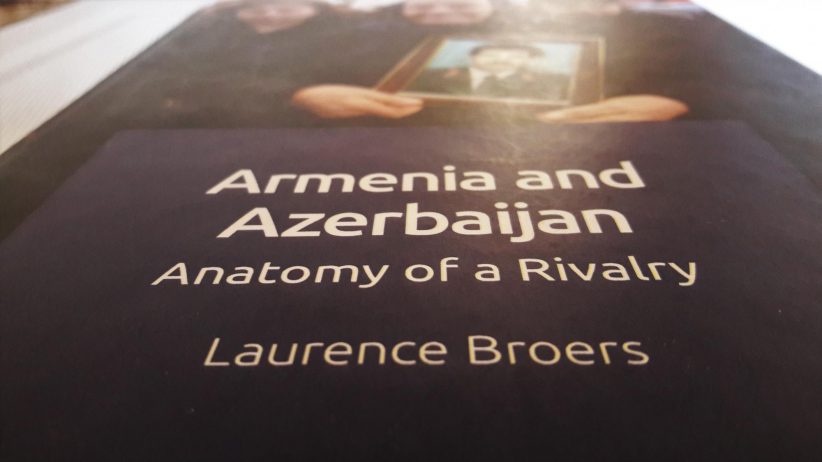 Relatively few serious scholarly works have been written by international authors on the Armenian-Azerbaijani conflict in the last few decades. The most popular work on the conflict has been Thomas de Waal’s “Black Garden: Armenia and Azerbaijan: Through Peace and War.” In this book, de Waal presents the conflict to an uninformed reader in a journalistic style without an in-depth analysis. In this regard, the new book by the well-known Armenia-Azerbaijani relations expert, Laurence Broers, “Armenia and Azerbaijan: Anatomy of a Rivalry,” was quite anticipated.

Broers asks a number of questions in the book and offers his answers to them. The author portrays the Armenian-Azerbaijani conflict as an enduring rivalry, which is described in the theory of international relations as a situation of recurring conflicts between two states. He adds that enduring rivalries between states last at least two decades and are accompanied by episodes of repeated violence. Such rivalries are also characterized as “A persistent, fundamental and long-term incompatibility of goals between two states.” In that sense Broers sees similarities between the Armenian-Azerbaijani conflict and other long-lasting rivalries such as the Arab-Israeli rivalry and the Indo-Pakistani rivalry.

The book consists of nine chapters where Broers discusses different aspects of the conflict. In the first few chapters, Broers tries to understand, “Why did a border dispute emerge among the Armenians and Azerbaijanis of the Soviet Union in 1988?” and “Why did violence erupt between Armenians and Azerbaijanis in the late 1980s?” Broers rejects the instrumentalist theory of ethnic conflict in the Armenian-Azerbaijani context, according to which elites utilize interethnic tensions to promote their own political goals. This approach is often used to explain the origins of the Balkan Wars of the early 1990s. Broers notes that elites surely played a certain part in the process of radicalizing Azerbaijani and Armenian society. Nevertheless, their role wasn’t crucial. To support his argument with facts, he notes that from 1988 to 1994, a number of Armenian and Azerbaijani leaders lost power because of the conflict. Broers then affirms that the Karabakh conflict is a case of mass-led mobilization.

After bringing clarity to this important question, Broers presents his theory on the causes of the Armenian-Azerbaijani conflict. In the second and third chapters, he elaborates on the history of the emergence of political nations, different geopolitical cultures in Armenia and Azerbaijan and various concepts about the Azerbaijani and Armenian homelands. Broers sees the origins of the conflict in geopolitical cultures existing in the opposing societies, which are sets of official and non-official narratives on the role and mission of the two states. According to him, in those narratives, the homelands of the two nations are much bigger than the actual size of contemporary Armenia and Azerbaijan. Moreover, in these geopolitical cultures, a number of territories (in some cases even the entire territory of the rival state) are claimed as part of their homeland by both Armenians and Azerbaijanis. Broers argues that Armenians and Azerbaijanis, having become victims of the above-mentioned geopolitical cultures, each deny the other’s right to exist in these disputed territories. He adds that Nagorno-Karabakh is one of the contested regions which in recent decades has turned from a geopolitical periphery into the basis of national projects of both states.

However, this work can overall be considered a big disappointment. Broers, being one of the most respected experts on the Karabakh conflict, had a brilliant opportunity to enrich the academic discourse with his unique input. In the end, he produced a one-sided work, using sophisticated academic language to present an extremely simplified picture of the conflict. In this book, the roles are distributed and predetermined in advance. Everything is black and white. It’s crystal clear who is the victim and who is the aggressor. The reader can understand that even from the cover of the book, where an Azerbaijani mother with a photograph of her dead son is pictured. Some of the language used in certain parts of the book is simply shocking. For instance, Broers, talking about Azerbaijani geopolitical culture, claims that it “Has absorbed the schizophrenia of its adversary.” It is a vivid example of intellectual irresponsibility and dishonesty. And not just in terms of the used language but also because this claim has nothing to do with reality. It turns out that official statements from Baku about “Azerbaijani Yerevan” are just a reaction to “Armenian schizophrenia.” When in fact the radicalization of the Armenian society is the result of Azerbaijan’s policies of the last decade and a half. For many years the proponents of “Augmented Armenia” were just a marginal group. It’s only because of Baku’s radical stance that this approach has become mainstream.

In another chapter, Broers uses the sophisticated language of the book to simplify the complex reality of the conflict. He calls the territories outside the former Nagorno-Karabakh Autonomous Oblast, which are now part of the Nagorno-Karabakh Republic, “the wild frontier of Armenian nationalism.” The real reasons behind the emergence of this “wild” frontier is of no interest to him.

Although Broers, foreseeing the possible backlash, denies that the main thesis of the book about geopolitical cultures and narratives is orientalist, it is, in fact, a classic example of orientalism. The conflicting societies are presented as irrational masses led by narratives that were formed decades ago. Don’t get me wrong, those narratives surely existed/exist but the claim that they are the driving force of the conflict is baseless. I am not sure that the author would have used his theory of geopolitical cultures to explain the independence movements of Catalonia or Scotland even if he had solid reasons to do so. This theory deprives the people of Artsakh of their agency and casts a shadow on the democratic credentials of the Karabakh movement. The framing of the conflict as rivalry pursues the same goal. There are no people in Nagorno-Karabakh fighting for their rights, instead there is a territory which like a number of other territories is disputed by Armenians and Azerbaijanis who live with irrational geopolitical fears.

There are also a couple of factual mistakes in the book. Broers uses the propaganda myth about the expulsion of Azerbaijanis from the city of Kapan in late 1987, which was made up by Azerbaijani public figure Arif Yunusov, popularized by Thomas de Waal, and debunked by independent journalists. He, particularly, writes that “Displacement appears to have begun with movements of Azerbaijanis from southern Armenia in 1987–1988.” This is another example of intellectual irresponsibility. There are other inexactitudes in the book. To enhance the quality of his argument about the dominant role of the geopolitical culture of “augmented Armenia,” Broers notes several times that the Nagorno-Karabakh Republic was renamed to “the Republic of Artsakh,” in 2017. This is also not correct. “the Republic of Artsakh” has been the official name of the country since 2006, used simultaneously with “the Nagorno-Karabakh Republic.” In 2017, the NKR’s ruling elite just changed the order of the two names in the new constitution. This type of errors can be explained by the fact that Broers hasn’t visited Artsakh in recent years and is not familiar with the situation on the ground. The main part of the book was written before 2018 and is a bit outdated. It becomes obvious especially in the chapter on the political regimes of the conflicting countries, where the pre-revolutionary political reality of Armenia is presented.

In summary, it is necessary to note that the main thesis of the book is substantiated very poorly, doesn’t show the whole picture of the conflict, and depicts a lot of rational incentives and factors as part of the realm of the irrational. There are a few important chapters in this work that present certain aspects of the conflict quite well, but overall the book is more misleading than revealing for uninformed readers. This is exacerbated by the fact that some parts of the book are very one-sided, which significantly reduces its value. Much more was expected from such an anticipated work.