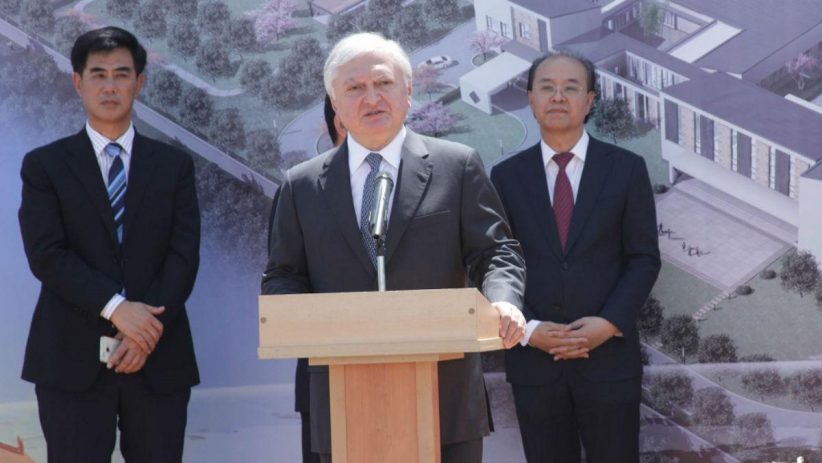 China’s growing involvement in the South Caucasus may provide Armenia a much needed flexibility in its foreign policy, argues Benyamin Poghosyan in an op-ed for commonspace.eu.

On August 9, 2017 work started on the construction of China’s new Embassy building in Yerevan.   Armenian Foreign Minister Edward Nalbandian, Yerevan’s Mayor Taron Markarian, and visiting Chinese Assistant Foreign Minister Li Huilai participated in the ground-breaking ceremony of the 40,000-square-meter embassy compound that should be completed by the end of 2019.  This will be the second largest Chinese diplomatic mission in the former Soviet Union. During his meeting with the Armenian Foreign Minister, Li Huilai emphasized that China would like to deepen its partnership with Armenia. “The unprecedented high-level relationship and friendship between China and Armenia are based on sincerity and mutual respect”, the website of the Armenian Foreign Ministry quoted the Chinese official as saying.

China’s growing involvement in the South Caucasus may provide Armenia a much needed flexibility in its foreign policy. Being incorporated within Russian sphere of influence, and with little hope for any breakthrough in its relations with Azerbaijan and Turkey, Armenia is making efforts to diversify its foreign policy. Relations with EU, NATO and the US may play a key role in this context, and the election of Donald Trump raised some hopes in Armenia that a possible thaw in US – Russia relations will create more comfortable conditions for Armenia to deepen its relations with the Euro-Atlantic community. But recent developments in US – Russia relations, especially the new sanctions imposed by Washington, and Russian retaliatory measures, make a US-Russia rapprochement a less likely scenario in foreseeable future.  In the current conditions Russia will make efforts to solidify its influence in Post Soviet space and thwart any Western attempts to gain ground there. Definitely the main battle line will pass through Ukraine, but the South Caucasus also will be part of upcoming great gamble. Armenia, as a member of CSTO and Eurasian Economic Union, and with a Russian military base deployed on its territory, is a key Russian asset in the region, and Moscow will not allow any strategic relationship to develop between Armenia and the European Union, the United States, or, NATO. Of course, it does not mean that Armenia will have no possibilities to deepen relations with Euro Atlantic community. Most probably Armenia will sign new comprehensive partnership agreement with EU during the upcoming Eastern Partnership Summit, and this month Armenian forces participated in NATO’s Noble Partner 2017 drills in Georgia, but Armenia will remain under strict Russian scrutiny to ensure that no red lines are crossed.

Meanwhile, Armenia desperately needs investments to boost its economy, to maintain a parity of power with Azerbaijan, and to try to halt the continuing emigration which puts enormous pressure on the country’s demography. Another key issue for Armenia is to break its isolation from regional transit projects. In these circumstances the rise of China may create new possibilities for Armenia.

Given the strategic partnership between China and Russia, growing Armenia-China relations  are likely to meet far less criticism and skepticism from Moscow. China does not make demands for political and economic reforms, and has no requirements on democracy, good governance and human rights protection, which makes it much easier for Armenia to develop relations with  it.  Due to Armenian membership of the Eurasian Economic Union Chinese companies can establish export oriented production lines in Armenia and export with zero tariffs to EAEU member states, especially the southern parts of Russia which is in geographic proximity with Armenia. If Iran will sign a free trade agreement with the EAEU Chinese companies can use Armenia as a launch pad for zero tariff entrance to the Iranian market too. The scheduled launch of a free economic zone in Southern Armenia, close to the Iranian border, in autumn 2017, can make Armenia more attractive for Chinese companies. The high quality and relatively low-cost workforce available in Armenia can play a key role in bringing Chinese consumer electronic giants to establish assembly lines in Armenia, with Iranian and Southern Russia markets as key targets.

Another key opportunity for Armenia is the possible involvement in China’s “Belt and Road” initiative. The southern route of B&R will pass from China through Iran to Europe and one of the possibilities here is to use Iran-Armenia-Georgia-Black Sea route. Separate from the Belt and Road initiative, since 2016 negotiations  have been ongoing between Iran, Armenia, Georgia, Bulgaria and Greece to launch a new Persian Gulf-Black Sea multimodal transportation corridor, which will connect the Iranian port of Bandar Abbas with Georgian Black sea ports via Armenia, and then through Bulgaria and Greece to European markets. It envisages the transportation of goods via railway in Iran, highways in Armenia and railways/highways in Georgia towards Black Sea.

The construction of a new North-South highway was launched in Armenia in 2012, and will connect the Armenian – Georgian and the Armenian -Iranian borders, and will facilitate the transportation of goods via trucks. The North-South highway will play a key role in launching the Persian Gulf – Black Sea multimodal transportation corridor. If Armenia in cooperation with Iran and Georgia can succeed in including this corridor in the Belt and Road initiative, it may attract Chinese investments in the construction of the North -South highway. and   importantly, will transform Armenia into one of transit countries for China – EU trade.

Dr Benyamin Poghosyan is the Executive Director of the Political Science Association of Armenia. He contributed this op-ed for commonspace.eu

Shaping a New Narrative for Armenia