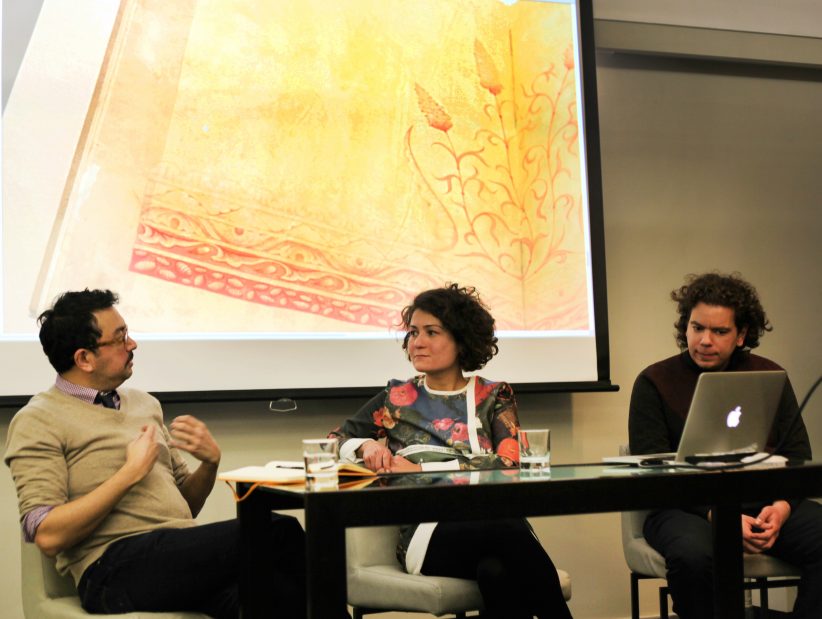 Last night at an event in Yerevan, Turkish artist Aslı Çavuşoğlu spoke about her recent project Red/Red, which exhibited at the 14th Istanbul Biennale in September 2015 and may soon come to Yerevan.

Red/Red focuses on the color of the Vordan Karmir, also known as the Ararat or Armenian cochineal, derived from a species of insect (Porphyrophora Hamelii) known to live on the Aeluropus littoralis plant along the Aras river banks bordering Turkey and Armenia. Since the 7th century BC, the pigment has been mostly produced by Armenians and used in manuscripts, textiles and frescos. However, largely because of Soviet-era industrialization damage to the habitat, the bug and its color have become critically endangered along the Armenian side, while knowledge of how to produce it has been lacking on the Turkish side since 1915.

With the knowledge of how to produce the pigment also near extinction, Çavuşoğlu was originally told the color would be impossible to find. After deeply searching, a dictionary of natural dyes led her to one person: Professor Armen Sahakyan at the Matenadaran, the Mesrop Mashtots Institute of Ancient Manuscripts in Yerevan.

Çavuşoğlu first came to Yerevan last May to meet with Professor Sahakyan, who gave her 12 grams of the ink. She then collaborated with different artists in Yerevan to design the works.

The collection consisted of six larger paintings and ten open-book style designs and was considered a highlight of the Biennale, even impressing the New York Times. She used a special restored paper produced in Istanbul that she bound at the center, with the binding representing the border between Turkey and Armenia.

The evolution of color began on the left side of the paper with a deeper “hegemonic Turkish red” – the red now found on the Turkish flag. The color faded towards the right to the Armenian cochineal. The designs depicted images inspired by the coexistence of the bug and the plant, and embodied the style of the ancient Armenian manuscripts.

According to Çavuşoğlu, a color has the power to either completely erase or reveal a narrative. Her designs utilize this pigment in a way that also proposes a model of coexistence. As she explained, “I was wondering how a color could remove the hidden histories of people… and possibly offer a new way of living together, of coexisting – like the bug and the plant together as an analogy for the people of both sides.”

This is in line with the common narrative found throughout her art, which is largely about the muted histories of people – not just of ethnic minorities, but of all marginalized people such as women. Çavuşoğlu discussed that her art generally expresses “how history is written by people in power, and how we can create alternative stories.”

The pieces were deliberately displayed in a way so they could still be touched, without any protection that might be found in a museum display – but they had a feeling of being between past and present, that the color and design “could soon be itself a museum artifact if not acted upon.”

At the Yerevan event, Çavuşoğlu discussed how Armenian-related political art is more prevalent in Turkey than that which addresses the current Kurdish issue, and this was apparent at the Biennale. This may be because many feel the Armenian issue is more distant and therefore a ‘safer’ topic, especially considering the censorship that affects many intellectuals in Turkey.

While most discussions which bring up the topic of genocide in Turkey are immediately shut down, Çavuşoğlu believes that art can provide another channel to approach the issue. In this way, Red/Red poses the question: “What happened to this color?”. Çavuşoğlu imagines her Red/Red project as a “trigger of a larger conversation” between Armenians and Turks.

Çavuşoğlu does not have one preferred medium of art, but prefers to first decide on her subject and then the appropriate medium for that subject. Her next project will focus on another color and another conflict – perhaps blue for Afghanistan.

But Çavuşoğlu still believes there is more work to be done on Red/Red. She plans to exhibit the project in Armenia this spring, ideally at the Matenadaran alongside the Vordan Karmir as used in the historical manuscripts. This would give Armenians an opportunity “re-embrace and re-appreciate” the nearly-extinct color that very much remains part of the national culture.