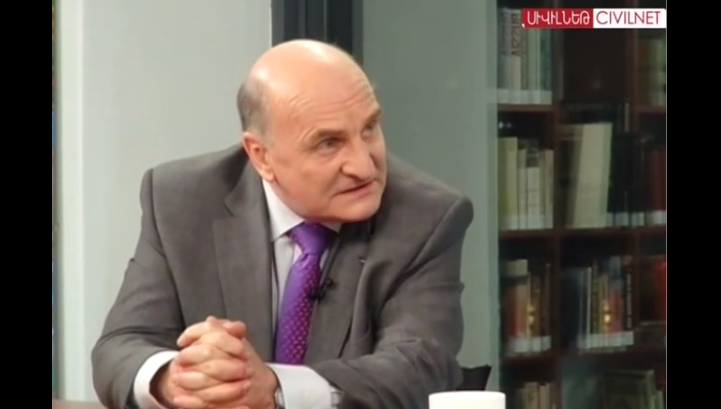 “…[W]e take the view, as have successive British Governments, that international law, including the 1948 protocol on genocide, is not retroactive, and that is part of the explanation for our position.” This is what David Lidington, Britain’s Minister of Europe said during an adjournment debate on the Armenian Genocide on March 23 in the British Parliament. Lidington was asked by Member of Parliament Stephen Pound if it was not time that Britian acknowledge and recognize the Armenian Genocide.

Prior to Lidington’s remarks, Stephen Pound who is a member of the UK-Armenia Parliamentary Friendship Committee led the adjournment debate in parliament, which lasted about 30 minutes.

“I make no apologies for raising this matter…[W]e are approaching the 100th anniversary of this appalling crime against humanity, in which 1.5 million people were killed in the most horrendous circumstances and an attempt was made to destroy an entire people — their culture, nationhood and very being and existence,” Pound began and went on to provide an extensive historical overview of the events that led to the implementation and realization of the first Genocide of the 20th Century.

“There were so many eyewitnesses there at the time. American Ambassador Morgenthau gave a detailed account, and Father Grigoris Balakian, who survived and was in Istanbul when the entente fleets finally sailed in at the end of the war, gave an incredible amount of detail. Above all, one of the reasons why we in this House can discuss this matter and know about it is the single, definitive volume describing the horror of the genocide, namely the famous ‘Blue Book’ by Lord Bryce and Arnold Toynbee,” Pound stressed.

Member of Parliament Jim Shannon asked whether it was not “past time that the Turkish Government not only admitted to the historical genocide of 1.5 million Armenians, but apologised for the most horrific atrocities they carried out at the time? We cannot ignore the fact that the Turkish government has to apologise for that.”

Stephen Pound remarked that the issue at hand was about the commemoration but he went on to talk at length about Britain’s refusal to recognize the Armenian Genocide. “It happened: it is incontrovertible that it happened. It happened within the memory of some people still living. Their grandparents and their great-grandparents died: their bones are still there in the Syrian desert, and their homes are still there in Anatolia, no longer occupied, although their Christian churches have been destroyed. It is within living memory, so why are we not recognising it?”

He went on to explain: “[T]he then Foreign Office Minister Geoffrey Hoon said that we could not call it the Armenian ‘genocide’ because Raphael Lemkin did not invent the word until 1944 or 1945. Let us think about that for a minute. When Cain killed Abel, there was no word for fratricide, but Abel was just as dead as if there had been such a word. Raphael Lemkin was present in Berlin at the trial of Soghomon Tehlirian, one of the members of the Armenian Revolutionary Federation who was part of the Nemesis group that assassinated 10 of the 18 perpetrators of the genocide indicted in the military tribunal in Istanbul at the end of the first world war, in what most people think was an attempt to minimise the impact of the treaty of Versailles. Raphael Lemkin, who is accepted as the originator of the word, said that it was his experience of that trial, listening to the evidence of the genocide of the Armenian people, that made him use it. The assassination of Talaat Pasha in Berlin in 1921 clearly precedes the use of the word ‘genocide’, but the same person—the man who coined the word—was actually at that trial and referred to it.”

“The Armenian people will not have their memory, their culture, their individuality, their strength or their national pride destroyed. Many people have tried; none have ever succeeded, nor ever will they. Think of the double agony of those people whose families were massacred, whose culture was destroyed, whose homelands have been taken over and who are now having that very act denied. That, for me, is the supreme double cruelty.”

The parliamentarian spoke about the Gallipoli centenary commemoration that has been set for April 24 by the Turkish government – the date coinciding with the same day that Armenians mark the Armenian Genocide. “To suggest that moving the commemoration of Gallipoli to the same day, 24 April, as the Turks have done, is anything other than a provocative act is pushing credulity,” Pound said and then asked whether the British government will be present in Yerevan for the centennial commemoration ceremonies. “President Putin will be there. Francois Hollande will be there…Can we not go the extra mile? Can we not finally give support and succour to the Armenian people whose relatives died? Can we not say to the Armenian community in this country—one of the most peaceful, law-abiding, hard-working, decent communities that we are proud to have in our country—that we, along with 22 other countries of the world, recognise the genocide that took place?”

Following MP Stephen Pounds speech, John Whittingdale, the chair of the UK-Armenia Parliamentary Friendship Committee said that Britain should use the term genocide to describe the events of 1915. He said, “The evidence is overwhelming. Those who try to dismiss it cannot argue with the records, photographs and accounts of witnesses, both Armenian and international, not least those from this country whose testimony is perhaps among the most powerful.”

Britain’s Minister for Europe, David Lidington who was present during the adjournment debate, responded to the question by Stephen Pound about whether or not the UK would recognize the Armenian Genocide. Lidington said, “I have to say to him that the Government’s policy, indeed the policy of successive Governments, has not changed since 1988 when this matter was reviewed. We take the view that genocide is not simply an expression of a political judgment.

It is now a crime, and the British Government recognize as genocide only those events found to be so by international courts—for example, the holocaust and the massacres in Srebrenica and Rwanda.”

We do not exercise a political judgment in ascribing the term “genocide” to a set of events, whether in Armenia, the Holodomor in Ukraine or the massacres of the Kurds by Saddam Hussein in 1998.

Lidington went on to say that Armenia and Turkey should now look to the future and their governments should find a way to face their joint history and “forge a new, more constructive relationship, and part of the role the UK seeks for itself is to support them in finding this path forward.”

In response to this, Stephen Pound said “…but immediately after the genocide, the British Navy took 50 of the worst suspects from the Young Turks to Malta to try them because it recognised that what had happened was against civilisation. There was not sufficient legislation at the time for the trial to take place so the British took them back—probably rightly so—but does he not agree that we need that recognition now so as to avoid such a situation in the future?”

Lidington replied that he did not want to get into a legal dispute.

Der Zor: The Remains of the Dead