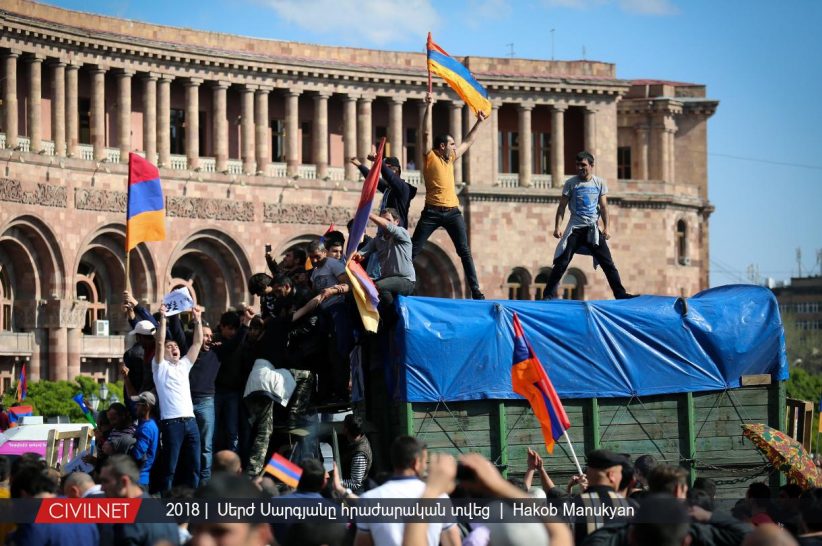 Bellow is an excerpt from “The Armenian Anomaly: A Historical Sociological Interpretation” article written by historical sociologist Georgi Derluguian. The piece was published in “Demokratizatsiya: The Journal of Post-Soviet Democratization.”

According to Derluguian, the Velvet Revolution in Armenia can achieve a sustained democratization if its political and social charge could acquire a pragmatic economic vector. “After all, the Armenians are full of surprises even if they often ignore their real advantages which are taken for granted.”

The revolution of April 2018 should not look so unexpected. All its structural ingredients have been in place and waiting for activation. Still, the revolution came as a surprise of gigantic force. If there exists one common trait in all revolutions, it is that they always surprising.

In the hindsight, one can see that this revolution had a very typical running-up period of seemingly lost popular hopes feeding the smug arbitrariness of rulers. First, the ruling Republican party of Serzh Sargsyan used the 2015-16 atmosphere of public disillusionment and apathy to fortify its formal positions by changing the constitution in a dubiously legitimate referendum. This turned Armenia into parliamentary republic with nearly regal powers accorded to prime-minister.

Before the new constitution could come into force, a likable and competent business executive Karen Karapetyan seemed being prepared as new prime minister. Born also in Karabakh, Karapetyan, however, earned his mathematic degrees in Yerevan and made a splendid managerial career in Russia’s energy giant Gazprom. Karapetyan looked suave, cosmopolitan, and just a milder pragmatic edition of Armenian intelligentsia — in short, not at all like the many fat brutes in the ruling regime. At the time, this surprising promotion appeared a smart move to assuage the popular misgivings. One cannot guess whether Serzh Sargsyan ever seriously considered the young technocrat as his successor.

In the end, having offered some hope of change, President Sargsyan rudely betrayed it. His last-moment clumsy maneuver was likely at the instigation of worried cronies and minions: patronal regimes sustained by insider deals inherently fear the change of hands. The recently changed constitution made crucial the latest parliamentary elections of 2017 although its importance seemed lost on many Armenians amidst their cynical apathy. In effect, the elections served the ruling party to unceremoniously reduce the opposition with the singular exception of Nikol Pashinyan’s electoral bloc inventively called Yelk (Way Out). Virtually alone among the contenders, the young Yelk-ers applied their energies in a grassroots campaign to personally mobilize the voters and hundreds of election observers trained to prevent fraud. These efforts gained Yelk a small foothold in the new parliament, but the more seasoned and prominent oppositionists altogether failed to overcome the barrier. The game seemed all set.

Then in Spring 2018 Serzh Sargsyan committed two cardinal mistakes in succession. For whatever reason, after much evasiveness he ended up appointing himself as the new Prime-Minister with huge executive powers and no term limit. An electoral authoritarianism now appeared in full consolidation. This left many Armenians aghast and looking for a way out.

Sargsyan’s second mistake, which in the beginning looked minor, was to rely on the familiar tactic of benevolently disregarding the protest campaign immediately launched by Nikol Pashinyan. Unusually for the Yerevan-centered Armenian politics, Pashinyan, himself a provincial, started with mobilizing the provincial Armenian towns hitherto regarded as the bailiwicks of local potentates. Timely changing his appearance from a clean-shaven parliamentarian in a suit to the rugged bearded hiker with backpack if not a guerrilla warrior en march, Pashinyan walked the miles to Yerevan bringing with him a growing troop of supporters. All along he insisted on the non-violent but this time absolutely political nature of protest.

Moreover, this movement also clearly had a leader although much of the action was still left to the networks of autonomous activists seasoned in many previous mobilizations. And, of course, everything was broadcast live on the internet. In short, the latest Armenian revolution achieved success because it built on the well-rehearsed contemporary repertoire of collective action and revived the impressive internal solidarity of Armenians regardless the distinctions of class, gender, age or locality. This time proved different because the protest had an unambiguous leader untainted by previous failures and a clear political goal of ending the self-serving regime which proved scandalously unprepared to defend the nation from external attack. With proper direction, the spark set an explosion.

But once the revolution succeeded, where could it be headed next? Its single leader Nikol Pashinyan after becoming the provisional Prime-Minister carefully avoided taking any position on the potentially divisive social, environmental, and economic issues. His only reference to economic concerns was so far the publicized Skype chat with the American professor of economics Daron Acemoglu, a fellow Armenian, who predictably advised to replace the extractive regime with an inclusive one.

Pashinyan’s first hundred days in power were marked largely by the spectacular investigations of past crimes and arrests among the former top officials including the ex-president Robert Kocharyan who overconfidently agreed to travel from Moscow for Yerevan on interrogation summons. In the short run, this helped to maintain the huge popularity of new regime. Yet it also alarmed Putin’s Moscow. Furthermore the lack of clear policy goals and credible candidates for government appointments inevitably put in doubt the professionalism of new Armenian leader, however understandable might be his hesitations.

The structural context of dilemmas, however, is glaringly visible and therefore the available options appear constrained and calculable. Armenia is a small landlocked country located in a distinctly hostile geopolitical environment. The industrial plant built in Soviet times by now is largely beyond repair and its bulky inputs and outputs could not be transported anyway because the railroads leading to Armenia across both Georgia and Azerbaijan remain severed since the Caucasus ethnic wars in the early nineties.

Even theoretically, Armenia cannot afford to break its dependence on Russia. The former imperial metropole still serves the single major supplier of military security as well as the biggest destination for Armenian labor migrants and predominantly agricultural exports (again, traveling by air or automobile across Georgia and the mountain passes of the Greater Caucasus). At the same time Armenia’s imports of industrial goods are largely from the EU countries or purchased via Georgia from the unfriendly Turkey. Iran is also an important neighbor and potential energy supplier, but here the trade prospects are seriously aggravated by the logistical bottlenecks in transportation and moreover the international political constraints. Armenia’s balance of payments, meager as it is, at present critically depends on labor remittances and foreign aid. All this seems plenty enough on the negative side.

Given that Armenia seems now following the well-established path of many revolutions, the trial and likely conviction of ex-president Kocharyan, the former ‘monarch’, would no less likely provoke foreign intervention. This could take the form of Moscow’s cutting the lifelines to Armenia or indirectly encouraging Azerbaijan to another try in Karabakh. Baku must be itching for it anyway having burdened itself with the stockpiles of unused expensive weapons, the inertia of revanchist propaganda, and probably also the need to deflect domestic social pressures after the end of high oil prices. The demonstration effect of the revolution in Armenia, coupled with the political turmoil in Turkey, could trigger instability in Azerbaijan.

Add to this Russia’s own strategic frustrations with its military base in Armenia. It is the closest foothold to the Syrian theater of operations, yet this base cannot be reliably resupplied due to Georgian objections and Azerbaijan’s blockade of Armenia from the Caspian side. A short war in Karabakh might provide Moscow with an opportunity to introduce its peacekeeping forces thus enlarging and making operational the Russian military extension in the South Caucasus. (Baku must also see and fear this prospect.)

But will the war be short? This time the better prepared Armenians could hold to their positions and, in one of the most venerable revolutionary patterns, rise to the challenge in a patriotic levée en masse. This prospect at once makes the future dangerously incalculable. The revolutions under external attack often radicalize with surprising force.

Could the hitherto peaceful and legalistic Nikol Pashinyan survive such a turn of events? Will he be replaced by a yet unknown Armenian Bonaparte or become a Napoleon himself? In the eventuality of longer ferocious war, very possibly with the use of strategic missiles, what could be the reactions of Turkey, Iran, and, if Iran moves, also Israel, as well as Europe and the United States? Given the roster of dire prospects and the prior geopolitical commitments of Moscow, it could just as well take a more conservative approach and let Pashinyan’s Armenia meet its own economic ruin and disillusionments in near future. But will Armenia get ruined?

Not necessarily at all. On the positive side, Armenia seems to possess a surprisingly strong economic potential that has been waiting for a political activation like the recent revolution itself. This hopeful scenario can be designated shortly as developmental state. The social scientists studying economic development know too well that, historically, the successes in upgrading the world market positions of Third World states strongly correlated with authoritarian regimes like in South Korea, Chile, or Singapore. There also exist, however, democratic exceptions to this rule like the island nation of Mauritius and, much closer to Armenia, Israel and Ireland — of course, both mid-sized states with strong ethno-national identities and large overseas diaspora. The recent revolution created in Armenia the charismatic concentration of political authority that can conceivably manage the necessary spark. What would then come into action?

At present the people of Armenia are impoverished but they preserved their traditional craftsman skills, family discipline, and the famed entrepreneurial spirit. Perhaps only a third of all Armenians today remain in the homeland.

In addition to the historical dislocations and migrations, in the aftermath of Soviet collapse Armenia suffered a massive labor emigration and brain drain. This recent loss could yet become a gain in the longer run because the Armenians, toughened and united by their difficult history, remain patriotically attached to their ancestral land and culture. The combination of diaspora resources and connections (today necessarily including Russia and other post-Soviet countries) with the high-quality and relatively inexpensive labor in the homeland seems a recipe for fueling economic growth.

Unlike China with its ocean of cheap labor, but much like the mid-income Israel or Ireland, the Armenian model of development must focus on the post-industrial economic activities: information technologies, advanced chemistry and electronics, healthcare, education, tourism, ecological high-value added agriculture, etc. This does not exclude the old Keynesian tricks like launching the public works programs that immediately create jobs, repair and upgrade the battered roads and city streets. A renovated Armenia would look still more attractive for investments and repatriation from diaspora.

Among the positive factors one can list the internal safety of Armenia, its abundance of fresh water from the mountains (which still needs conservation), the diversity of climate zones with pronounced seasons, moreover the openness and polyglot traditions of Armenian culture which puts prestigious premium on education and achievement. Incidentally, chess is a compulsory subject in Armenian schools since the fourth grade.

Critically missing until now was the accountable and sufficiently strong political regime that could credibly guarantee the investments and pro-actively pursue both Armenian and non-Armenian investors (rather than begging the donors). It remains to be seen whether Nikol Pashinyan and his currently growing circle of collaborators could foster such a regime. Yet the opportunity seems real enough. And what are the alternatives anyway?

Georgi Derluguian is professor of social research and public policy at New York University Abu Dhabi. Among his many scholarly works is the monograph Bourdieu’s Secret Admirer in the Caucasus (2005) and the debate book Does Capitalism Have a Future? (2013, co-authored with Immanuel Wallerstein, Randall Collins, Michael Mann, and Craig Calhoun) which is now translated in seventeen languages.

Armenia at The Met