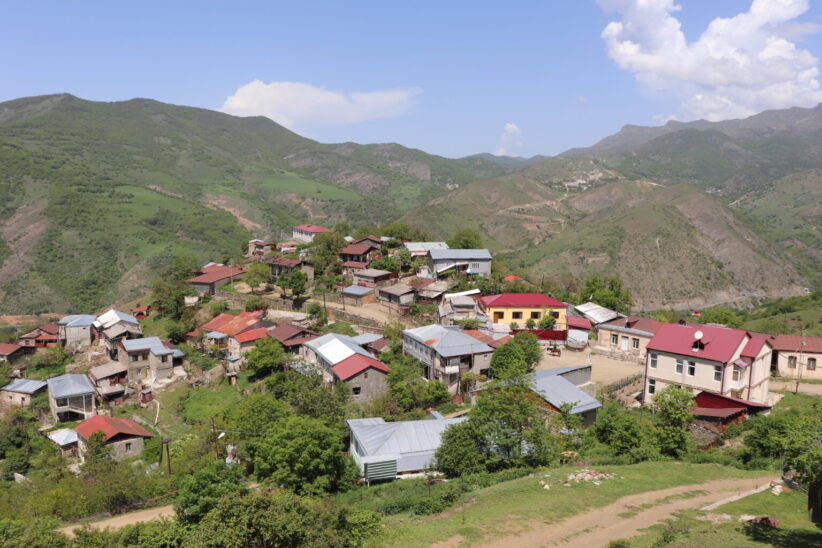 Despite its name (“mets” means large), Mets Shen village is a small community in Artsakh’s Shushi region, which includes other communities as well as the city of Shushi. During the Second Karabakh War, most of the region, including the city, came under Azerbaijani control, but three villages – Mets Shen, Hin Shen, and Yeghtsahogh – remain Armenian.

Before the last war, roughly one hundred people lived in Mets Shen. But most of the population fled the area during the war, and less than half have returned. The village is now home to 40 residents.

Samvel Tavadyan, who lives in Stepanakert, has been teaching history at the Mets Shen school for the past three years. He goes to the village on Thursdays, teaches for a couple of days, and returns to Stepanakert on Saturdays. He used to have eleven students, but after the war, the number has gone down to four.

I decided to accompany Samvel to Mets Shen. There, I was hosted by Samvel’s colleague Hayk Zakharyan. While Hayk was out, we spoke with his father, Valeri Zakharyan.

Naturally, the conversation drifts off to the First and Second Karabakh Wars, specifically to Operation Koltso (Operation Ring).

From April to August, 1991, the Special Forces of the Azerbaijani Interior Ministry (known as OMON, the abbreviation of the Russian name of the force), with the support of the troops of the Interior Ministry of the USSR and the 4th Soviet Army (its 23th division stationed in Kirovabad) launched the large-scale “Koltso” (meaning “Ring”) operation on deportation of the Armenian population of Artsakh.

“Women were deported from the village, and some men were taken to Lachin and beaten,” says Valeri Zakharyan.

After the expulsion of the Armenians from the region in 1991, the village was resettled by Azerbaijanis. A year later, on May 17, 1992, the village and the city of Shushi were liberated by Armenian forces.

But now, as in Soviet times, the region is located in between territories controlled by Azerbaijan.

During the First Karabakh War, the population of the village fought in the Shushi Regiment. The Mets Shen village had 11 casualties in the First War, and 1 casualty in the Second War. Valeri himself was injured in 1994, days before the ceasefire.

As for today, the main topic of conversation in Mets Shen is the events around Sev Lake, in Armenia’s southern Syunik region, where Azerbaijani forces crossed into Armenian territory by about 3.5 kilometers

But for these villagers, Azerbaijani incursions are not a new occurrence. Last December, more than a month after the ceasefire agreement, Azerbaijani forces had set up a post and closed off the road from Mets Shen to Hin Shen. Following negotiations, the Azerbaijanis finally retreated. But at present, their flag flies on a nearby hilltop.

“One day we will find ourselves in the same situation as the Sev Lake,” the village head, Davit Davidyan, jokes.

Davidyan says that since the end of the second war, the loss of forests has been one of the main challenges for the community. People are unable to collect greens, blackberry, plum and walnut from the nearby areas. Cattle breeding is also difficult because Azerbaijanis do not return animals that crosses into their area.

According to the village head, lack of weapons is another grave security threat.

“When we go to negotiate with the Azerbaijanis, they are armed, we are unarmed. At least give me a gun so no one sees that we have a weapon,” complains the village head, who has already spoken with various officials about this issue.

As evening falls in the village, I decide to finish my work so that I can catch the last bus. There is little time left to walk around the village.

I get on the bus which had brought some people, and is taking me and a mother with many children back to Stepanakert. Most likely, an internally displaced person, trying to settle in Hin Shen.

The bus passes through Russian peacekeepers’ checkpoints, and I think about the future, our situation, the second war, and the now forgotten first war.

Armenia Says Part of Azerbaijani Forces Have Retreated Back