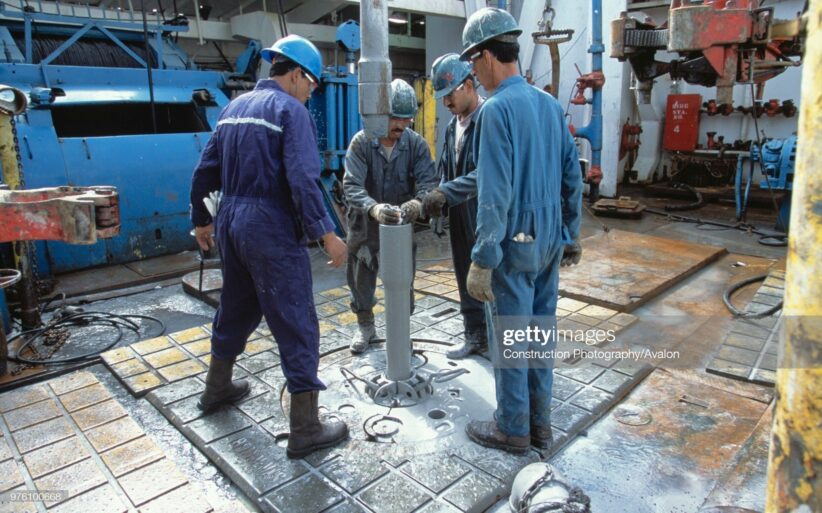 Oil workers on drilling floor of a drilling rig in the Caspian Sea, Azerbaijan. (Photo by Giles Barnard/Construction Photography/Avalon/Getty Images)

Azerbaijan’s gas-export strategy has reached a crossroads, according to a paper entitled “Azerbaijan’s gas-sales strategy at a crossroads”, written by Simon Pirani and published by the Oxford Institute for Energy Studies (OIES). This opinion is based on Turkey’s (Botas’) suspension of its gas purchases from Shah Deniz 1 since April 17, 2021, following the contract’s expiration after fourteen years (deliveries started in 2007). According to BP (the main shareholder and operator of the Shah Deniz field), discussions are underway between the parties in question. The paper’s author believes that an agreement will probably be reached eventually, although its content remains to be seen. In the meantime, Turkey is continuing to buy gas from Shah Deniz 2 under a contract which started in 2018 and runs until 2033․

This type of contract non-renewal (even if it’s only provisional) is unusual in the gas sector and is forcing Azerbaijan to consider other possible outlets for its gas. Nevertheless, opportunities are very limited. There is obviously the domestic market, as some of Azerbaijan’s gas demand is met by imports from Russia and Iran. But the domestic market isn’t very attractive for the Shah Deniz partners, as its prices are too low ($44 to $117 per thousand cubic meters) and potential needs are too small. So all that’s left is the European market. This option seems to have been favored following the setback of April 17, at least in part (as flows via the Southern Gas Corridor have increased since that date). As a result, the Turkey-Italy section of the TAP gasline is now operating at full capacity, much earlier than the date set for the plateau level in the Shah Deniz 2 contract. However, this solution isn’t necessarily viable beyond the short term․

At what price could additional volumes of Azeri gas be delivered to Europe? This is an important question, as the cost of deliveries to Italy (including transportation) range from $273 to $293 per thousand cubic meters, which is far higher than wholesale prices (on Italy’s PSV hub). The author arrives at these figures by estimating the cost of upstream․

production in Azerbaijan at $50 to $60 per thousand cubic meters, adding $50 for transit through Georgia, $103 for transit through Turkey and $70 to $80 for transportation via the TAP pipeline to Italy. Gas imported into Italy from Russia is only half as expensive, while gas from Algeria costs only one-third as much. In contrast, at a cost of $179 to $189 per thousand cubic meters, Azeri gas is much more competitive in Turkey than in Europe.

According to the OIES, Turkey is no longer prepared to sign the usual “oldfashioned” long-term gas contracts, indexed to oil and with binding take-or-pay clauses. Botas’ bargaining power has increased since Turkey discovered gas in its waters and successfully diversified its sources of imports. The company is also reaping the benefits of historically low gas prices. When it comes to its gas market, Turkey tends to draw inspiration from the European model, and to move closer to it. As the country’s LNG purchases grow, it is increasingly turning to the spot market, and dependence on pipeline gas imports is therefore declining. As a result, a new contract for gas from Shah Deniz 1 will probably differ from the first. The volumes involved will be smaller (as the field is declining), while prices will be lower. The take-or-pay obligation (which was previously set at 80%) will certainly be reduced.

The international energy market has changed completely since the development of the Shah Deniz 2 project began to be considered (in 2008) and its Final Investment Decision (FID) was made (in 2013). Today’s watchword is the energy transition. Longterm global gas demand prospects are being scaled back, while a glut is emerging on the supply side. Europe wants to be a leader in the fight against climate change, and gas is no longer seen as an acceptable option. These developments could all affect Azerbaijan’s gas projects and the planned expansion of the Southern Gas Corridor. Baku’s goal is (or was, should we say) to attract investors in order to double the capacity of both the trans-Turkey Tanap pipeline (from 16 to 31 bcm/annum) and the Greece-to-Italy TAP (from 10 to 20 bcm/annum). Capital spending in upstream gas is also threatened. For example, an FID for the second phase of the TotalEnergies-operated Absheron field (which is targeting exports of 5 bcm/annum) has not yet been made and could be delayed.

Other Azeri gas projects (such as Karabakh, Shafag-Asiman and Ashrafi-Dan Ulduzu-Aypara) are also at risk. Most importantly, it should be stressed that the OIES paper was drawn up before Turkey announced its new gas discovery on the Sakarya field, in the Black Sea, in early June 2021. Ankara is now hoping to produce 15 to 20 bcm/annum of gas there over a twenty-five-year term. This will further strengthen Botas’ bargaining power over its suppliers, including Azerbaijan (see above article on Turkey).

A Sydney Family’s Story of Repatriation to Armenia