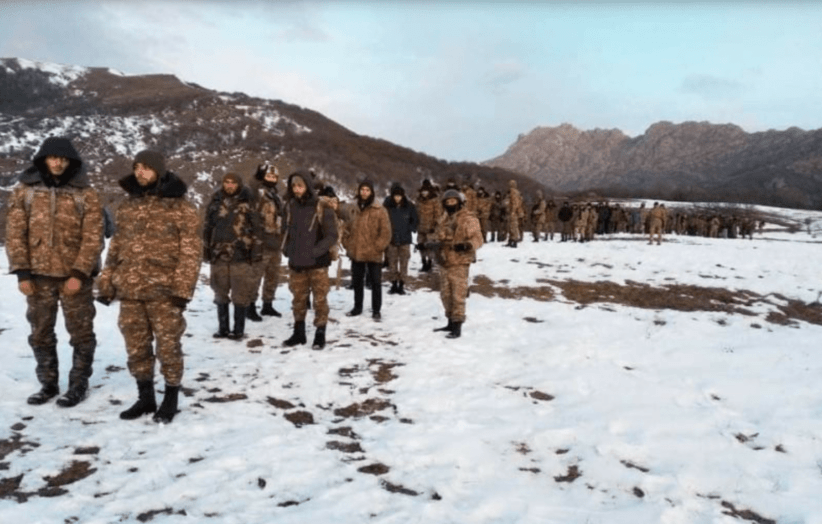 Azerbaijan’s Turan news agency reports that the state prosecutor has dropped terrorism, sabotage, and other grave charges against the 14 Armenian prisoners of war (POW) who were being tried in Baku.

According to the Turan article, titled “Armenian terrorists turned out to be border violators”, two of the 14 POWs in the trial – Avakyan Hrach and Serobyan Gegham – received a four-year sentence, while 12 others received six months in prison. Those soldiers have already completed their six months sentence in Azerbaijan but it is unclear when and if they’ll be returned to Armenia.

Although the news doesn’t come from official Baku, it’s unlikely that this type of information would be floated if it was not verifiable.

These 14 POWs were the first to be tried in Baku since the end of the Second Karabakh War. They were among more than 60 Armenian soldiers captured after the war near Hadrut in Karabakh.

Previously, during a hearing at the Baku Grave Crimes Court on June 25, Judge Afgan Hajiyev announced that they would face 14-20 years in prison or life imprisonment for charges of “terrorism, acquisition and keeping of weapons and explosive substances, creation of illegal armed groups, and trespassing the state border.” It is not yet clear why the graver charges have been dropped.

Azerbaijan’s continued holding of over 200 Armenian POWs directly contradicts pledges both sides made to “exchange prisoners of war, hostages and other detained persons, and dead bodies” in a November 10 ceasefire agreement brokered by Russia. At least 19 Armenians have been killed in Azerbaijani custody since the end of the war, lawyers representing a group of Armenian POWs have said.