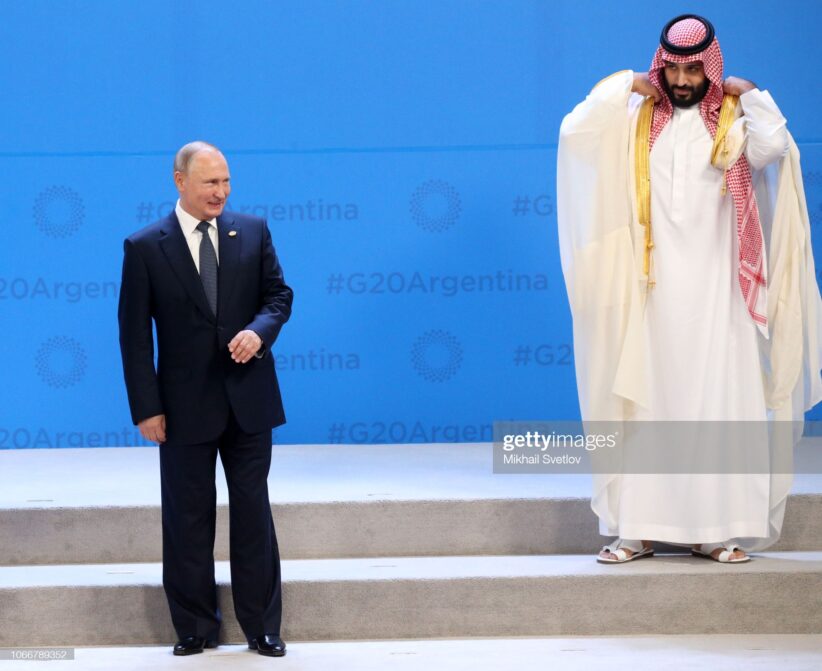 This article was published in the World Energy Weekly (November 1, 2021 issue), a publication of Petrostrategies, a French think-tank that specializes in energy issues.

The attitudes of Saudi Arabia and Russia on the oil and gas markets raise many questions. These two major players – respectively the leading global exporters of oil and natural gas – have done nothing to promote an increase in supply that could have helped to curb the rise in the prices of these hydrocarbons. Together, they have led OPEC+, which decided, on October 4, to maintain the increase in crude oil output by the alliance’s member states at the 400,000 b/d level planned for November, despite the fact that the group’s experts have presented a required increase scenario up to twice as high. The Saudis themselves have acknowledged that soaring gas prices have caused demand to shift from gas to oil, to the tune of some 500,000 to 600,000 b/d. For its part, Russia has remained deaf to Europe’s calls for an increase in its gas exports beyond the volumes provided for in its long-term contracts (which it is scrupulously honoring).

In Moscow, during the Russian Energy Week, the Saudi Minister of Energy praised the successes of OPEC and OPEC+, and advocated the creation of organizations of gas- and coal-producing countries. “Gas markets, coal markets and other energy sources need to be regulated, people need to copy and paste what OPEC has done and what OPEC+ has achieved”, said Prince Abdulaziz bin Salman. “What we see in the oil market today is an incremental [price] increase of 29%, vis-à-vis 500% increases in [natural] gas prices, 300% increases in coal prices [and] 200% increases in NGLs”, he noted.

How Saudi thinking has changed

Never before has a Saudi minister been heard to advocate the creation of an “OPEC” for gas and coal. To measure the progress made by the Saudis, one should remember that several times in OPEC’s history, Riyadh has chosen to risk causing schisms within the organization in order to impose its will on the majority of its members, either to limit price rises (December 1976) or to cut prices (1986, 2015-16). Saudi Arabia is now presenting OPEC, an organization hated by its former protector, the USA, as an example to follow. And it has chosen the Russian capital as its tribune to do so, just weeks after dismissing President Joe Biden’s national security adviser, who had been sent to Riyadh to demand as large an increase in oil output as possible.

Current economic considerations (such as how will oil demand and global economic activity evolve in the short term?) aren’t enough to explain the observed change in the Saudi position. It rather seems to be a shift in Saudi Arabia’s perception of the world’s movement towards the post-oil era. Until now, the country has tried to make sure that oil’s lifetime as a major energy source was as long as possible, and that its reserves could be extracted to the last barrel, if possible. It now looks as if the Saudi leaders have convinced themselves that the developed countries are determined to accelerate their withdrawal from oil under any circumstances and regardless of the price. The Saudis, along with the other oil-exporting countries, are probably thinking that, if that is indeed the case, they might as well sell their oil at the best possible price. In short, as they become less and less certain that they will be able to use all their oil reserves, they are opting for another strategy: to make the most of it while there’s still time. If this is really the new Saudi approach – and we should see evidence of this fairly soon – we will have to expect relatively high crude oil prices for several years.

Riyadh has lost its illusions about the United States

Several arguments support this analysis. First of all, there is the fact that, politically, the Saudis are disappointed with the West, and with the United States in particular. Their ongoing rapprochement with Iran can be ascribed to the same reasons: as they expect no serious protection from the United States, they are trying to reach an understanding with their Iranian neighbors. Under such conditions, why should they care about the price of gasoline paid by Joe Biden’s voters? Unlike the United States, Russia seems to be steadfastly respecting its external political commitments. It shares common interests with Saudi Arabia in the oil sector. The Iranians listen to what it says. In recent years, since the emergence of OPEC+, Saudi Arabia’s leaders have learned to cooperate with the Russians: they have overcome their (sometimes personal) reluctance to cooperate with them․

Saudi Arabia needs colossal financial resources to transform its economy and prepare for the post-oil era. It has fallen far behind in this area compared to some of its neighbors, first and foremost the UAE. Crown Prince Mohammed bin Salman, who made economic transformation his priority as soon as he managed to consolidate his power in 2016, probably realizes today that the task is much more difficult (and costly) than it had seemed. Furthermore, he has just pledged to reduce his country’s carbon emissions to zero by 2060. This program alone will require some $200 billion in investment. Another powerful argument is that relatively high oil prices today can prevent the onset of oil shortages tomorrow, as they will encourage upstream investment, which has decreased substantially in recent years. According to Moody’s, global upstream investment will have to be increased by 54% to $542 billion if an oil shortage and shock are to be avoided in a few years’ time. In the event of such a shock, prices would rise much higher than they have today, further hastening the end of oil. At current prices, the Saudis do not fear a “destruction” of demand: at most they anticipate a slight slowdown of demand increase, which wouldn’t be a bad thing, in view of the aforementioned investment shortfall.

The shock caused by the IEA: death to oil!

To quote an exact date for the change in the Saudi position, one can think that it was probably triggered in May 2021 by the IEA’s resounding appeal to stop investments in new upstream oil and gas projects. This appeal may have had the effect of a kind of declaration of war. To the Saudis, it must have sounded like one: “Death to oil”! The West was putting its cards on the table. A West that Russia has always seen as a threat. Now Saudi Arabia could feel threatened too, and even more existentially than Russia, whose economy is more diverse than its own. Russian and Saudi interests are convergent․

As luck would have it, natural gas prices began to rise in both Europe and Asia just as the IEA was issuing its appeal. Russia let it pass: why would it try to prevent a rise in gas prices? The opportunity was too good to miss; the hike supported its arguments towards the Europeans. One can almost hear them saying: “You wanted to break long-term purchase contracts that provide security of supply; you are now suffering a supply shortage. Our long-term contract customers are protected by (partial) indexation to the price of oil, and none of them have been turned away when they asked us to increase deliveries. You wanted to replace the oil indexation of gas prices with gas-to-gas competition; look where it got you, with spot prices five times higher than the price generated by indexation on oil. You wanted to prevent the construction of the Nord Stream 2 gasline; if it had been operational today, the gas crunch wouldn’t have happened”. And so on….

The renewed confidence of the Russians

In their various statements, Russian officials are happy to declaim a lengthy list of arguments as a kind of public revenge on Europe. But most noticeable is the renewed confidence of the Russians in both themselves and their gas. Even the risk of seeing their gas rejected by the infamous “taxonomy” that the European Union is currently drafting hasn’t changed their position. It should be noted in passing that just as the IEA launched its famous appeal, China was beginning to suffer the first signs of the energy shortage that has hit it head-on in recent months. The Russians must therefore believe that the construction of their “Power of Siberia 2” gasline project to China is now almost a certainty. Their overdependence on the European market will be mitigated. What’s more, “Power of Siberia 2” is to transport gas to China from Russian fields that are already serving Europe. Moscow will be able to let China and Europe compete to buy its gas, and will then decide, month by month, how much of it will be sent in one direction or the other (outside contractual constraints). Moscow is thus imposing its conditions on the Europeans. Vladimir Putin has told them openly that, if they want more Russian gas, they will have to authorize Nord Stream 2 to operate and sign new long-term gas purchase contracts with Gazprom.

While Nord Stream 2 will certainly be operating in a few months’ time, it is unlikely that the Europeans will sign any new major long-term contracts for Russian gas. The Russians are aware of this, and here is also where their position resembles that of the Saudis on oil. They are convinced that whatever happens (whether gas prices are high or not), Europe’s post-gas transition will be accelerated as much as possible. Under these conditions, why shouldn’t they try to profit from additional gas revenues as much as they can, while providing the Europeans with proof that – for many years to come – they won’t be able to dispense with Russian gas, and that US LNG won’t free them from this dependence?

Angela Merkel understood this, which is why she so stubbornly pushed to see the Nord Stream 2 gasline completed, despite enormous pressure from the United States. This would ensure, at the very least, that Europe’s dependence on Russian gas wouldn’t be aggravated by dependence on transit through Ukraine and Poland.