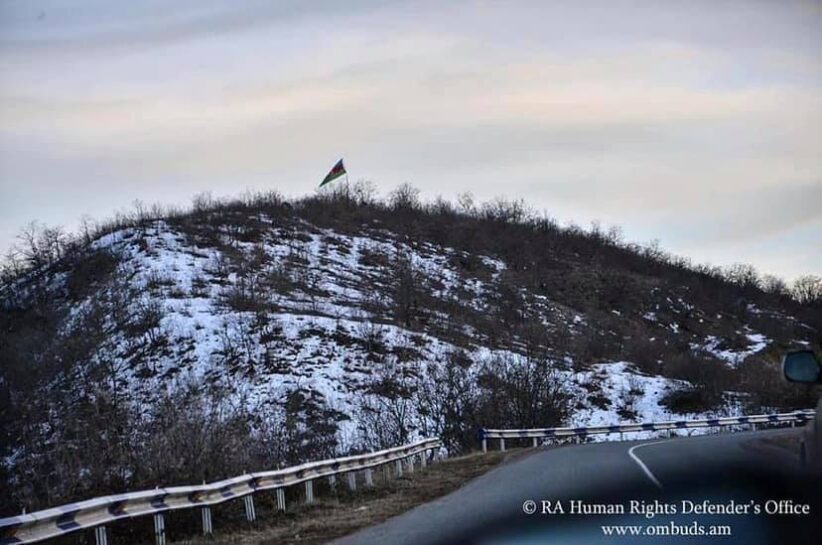 In a statement posted on Facebook on Monday, Armenia’s Human Rights Defender Arman Tatoyan said that the statement made by the country’s Security Council regarding Azerbaijan’s control of Syunik roads violates the Constitution.

Below is Tatoyan’s full statement in English.

1) In particular, the November 15 Security Council statement refers to some unspecified USSR maps, and notes that the sections of the Goris-Kapan and Kapan-Chakaten highways currently under Azerbaijani control are not in the territory of the Republic of Armenia.

Further, the Security Council statement speaks about the creation of a network of alternate roads, thus seemingly finding acceptable Azerbaijan’s control over the mentioned roads.

Armenia’s Human Rights Defender is convinced that with this statement by the Security Council, human rights norms are completely ignored, and Azerbaijani control over the mentioned roads violates the internationally recognized fundamental rights of the Armenian population, and guaranteed by the country’s Constitution.

2) First, according to Article 2 of Armenia’s Constitution:

“a. The human being, his or her dignity, fundamental rights and freedoms are the highest values.

b. The State shall ensure the protection of fundamental human and citizen’s rights and freedoms, in conformity with the principles and norms of international law.

c. The State shall be bound by fundamental human and citizen’s rights and freedoms as directly applicable law.”

Chapter 2 of the Constitution guarantees the basic human rights and freedoms of a citizen.

Part 1 of Article 191 of Armenia’s Constitution stipulates that the Human Rights Defender ensures the protection of the human rights and freedoms violated by state and local self-government bodies and officials.

Article 52 of the Constitution enshrines the absolute constitutional right of every person to receive the assistance of the Human Rights Defender in the event of a violation of his or her rights and freedoms by the above-mentioned bodies and officials.

Among other international demands, the statement of the Security Council ignored the December 19, 2017 OSCE Official Guide on Delimitation and Demarcation of State Borders, the UN High Commissioner for Human Rights 2021 guide on international human rights, etc. These guides enshrine human rights as a mandatory component of any cross-border process.The issue is that from September-November 2020 until today, including during the 2021 establishment of the so-called Azerbaijani border and customs checkpoints on the Goris-Kapan and Kapan-Chakaten roads announced on November 10 and 14, the staff of Armenia’s Human Rights Defender has conducted on-site visits, sustained monitoring, and examined individual and collective complaints addressed to the Defender. And as a result, obtaining reliable facts ascertaining that the rights of the civilian population of Armenia to life, security, freedom of movement, physical and mental integrity, property, freedom of economic activity, the interests of the child, etc. have been violated since the arrival of the Azerbaijani armed forces on these roads. There are no mechanisms to protect these rights, prosecute violators, etc.

In particular, on the Goris-Kapan road, evidence of Azerbaijani actions violating the rights of the population of the Republic of Armenia were registered, including the deliberate closure of the road in the sections of Vorotan and Davit Bek on August 25-27, which deliberately isolated Nor Arajadzor, Bardzravan, Vorotan, Shurnukh communities and created a humanitarian crisis. Other acts included throwing stones at civilian vehicles, threatening with weapons civilian vehicles on the side of the road near Azerbaijani positions, stopping children on a bus for the purpose of intimidation, collecting illegal payments from Iranian citizens legally in Armenia, making other illegal demands from them such as car fuel, etc.

Six villages in the Kapan community – Chakaten, Shikahogh, Srashen, Tsavi, Nerkin Hand, Shishkert – face serious humanitarian problems due to the so-called Azerbaijani checkpoint on Kapan-Chakaten road. In addition, the facts confirm that after the war, the presence of the Azerbaijani Armed Forces in different parts of the road itself disrupted the free movement of civilians in these areas. There were reports of them appearing on the sidewalk with weapons and masks (including on November 14). It should be remembered that on February 26, 2021, this road was closed for several hours due to a provocation by the Azerbaijani armed forces.

Another important consideration: the construction of alternative roads does not eliminate the real threats posed by Azerbaijani armed and masked Azerbaijani servicemen present on the Goris-Kapan and Kapan-Chakaten roads. Their presence threatens the life and security of the population of the Republic of Armenia and especially those of the residents of the communities adjacent to Azerbaijani posts.

The Azerbaijani soldiers who tortured and killed our servicemen and civilians during the war and who were not punished are now the ones stationed on the Goris-Kapan, Kapan-Chakaten roads.

Following the war, the Azerbaijani authorities deepened their propaganda of hatred of Armenians and hostility and enmity. The Azerbaijani Armed Forces found themselves on these roads through the threat of war and genocidal policy (these facts are confirmed by evidence).

There has been no delimitation or demarcation of borders between the two countries.

Therefore, the presence of the Azerbaijani armed forces near our villages and on the roads is a violation of the rights of the Armenian population.

Any part of Armenia’s governing authority, including the Security Council of the Republic of Armenia, is obliged to be guided, including in its statements, by human rights requirements. It cannot make statements that violate or endanger human rights or make their protection impossible.