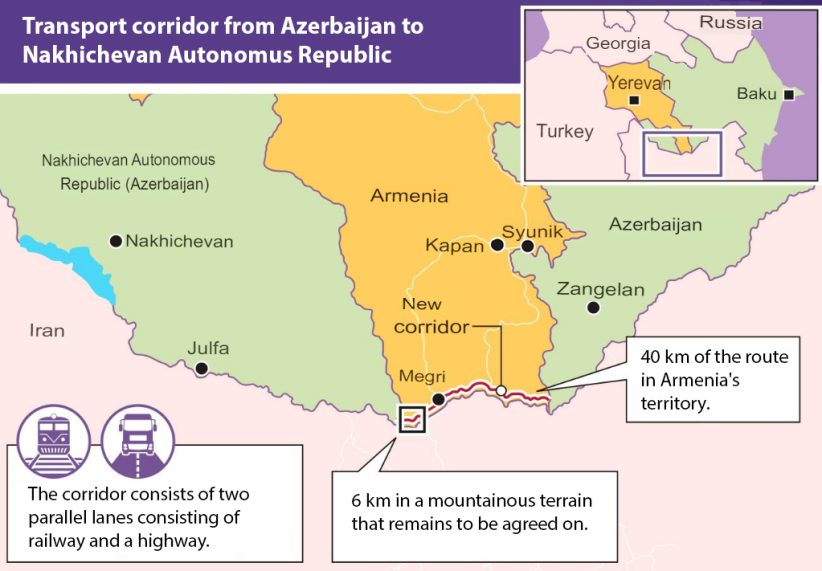 Armenia and Azerbaijan have nearly come to an agreement on a route connecting mainland Azerbaijan to its Nakhichevan exclave via the southernmost Armenian region of Syunik, the well-known Russian newspaper Izvestia reported Wednesday. The paper cited exclusive information from an unnamed, “high-ranking, informed source.”

“Russia helped Armenia and Azerbaijan agree on a highway in the Zangezur corridor, (and) only a small section of 6 kilometers remains to be agreed upon,” Izvestia wrote, adding that the two sides had already reached a deal on a parallel rail track last fall.

The source said Yerevan and Baku agreed to allow Avtodor, the Russian state infrastructure company, to “propose a simple engineering solution” for that 6-kilometer section, which cuts through difficult mountainous terrain in the westernmost part of Syunik.

The rest of the route will comprise about 40 kilometers of renovated Soviet-era roads and will run along the Armenian side of the Araxes River, which forms the country’s border with Iran.

Nonetheless, the news that Armenia and Azerbaijan have agreed to reestablish an overland transport connection leaves observers with as many questions as it provides answers.

It remains unclear when exactly the new route will open and, perhaps more crucially, what its status will be. Baku has repeatedly pushed for the passage to have the status of a corridor, implying Armenia would not have control over or checkpoints on the route. Yerevan has consistently rejected that prospect, saying it wants full control of the road.

However, the 2020 ceasefire declaration not only stipulates that Armenia should open an overland connection between mainland Azerbaijan and Nakhichevan as part of the unblocking of “all economic and transport links in the region,” but also says the passage should be controlled by Russian border guards.

The plan was reportedly finalized earlier this month by the joint working group that is negotiating on the unblocking of regional transport connections. The group is chaired by the Armenian, Azerbaijani, and Russian deputy prime ministers.

Izvestia said that Armenia “accelerated the negotiation process” on the passage in March after Azerbaijan unexpectedly signed an agreement with Iran that would set up a transit route bypassing Armenia entirely. Russian mediation was key to concluding the deal between Yerevan and Baku, the paper reported.

The Armenian and Azerbaijani Foreign Ministries did not respond to Izvestia’s requests for comment. As of late Wednesday afternoon local time, they had not responded publicly to the report’s publication.

Artsakh will be without gas for one week