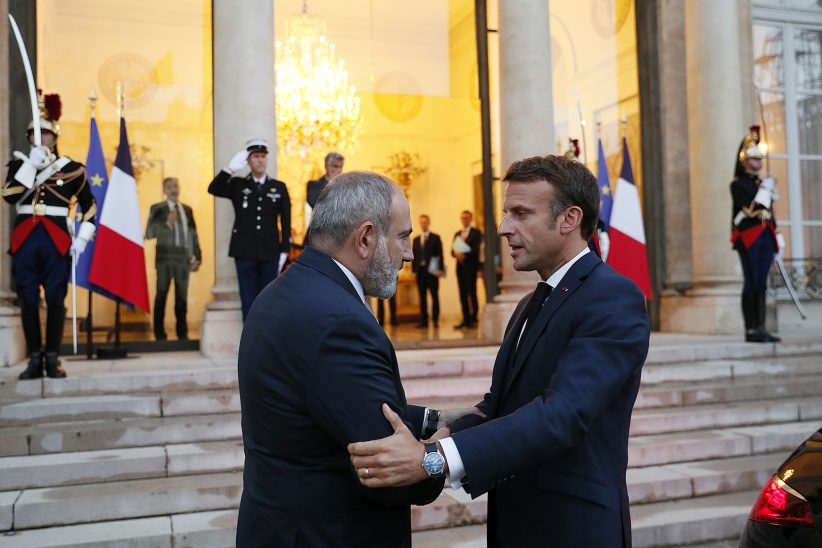 French President Emmanuel Macron and the UK embassy in Yerevan issued separate calls for Azerbaijan to withdraw from Armenian territory Monday, in some of the strongest language to come yet from Paris and London about Azerbaijan’s unprecedented attack on Armenia earlier this month.

“France demanded that Azerbaijani forces return to their initial positions,” Macron said at a press conference in France Monday alongside Armenian Prime Minister Nikol Pashinyan. “The fact that the border is not demarcated cannot justify any advance into the territory of another country.”

“France is convinced that the use of force cannot be a solution for either Armenia or Azerbaijan, and it is necessary to resume the dialogue immediately. All unresolved issues, which are numerous, should be resolved exclusively through negotiations,” Macron said.

Meanwhile, the UK embassy in Yerevan said in a press statement Monday that “armed forces should be withdrawn to the positions they held prior to this outbreak of hostilities,” also urging for the return of prisoners of war and a “thorough investigation” of reports of torture and mistreatment of captured soldiers.

It is some of the strongest language to come yet from France and the UK with regard to Azerbaijan’s attack earlier this month and follows repeated calls by the United States for Azerbaijan to withdraw.

Ned Price, a State Department spokesperson, stressed at a press briefing in Washington Monday that, “Our message has been consistent for some time. We call on Azerbaijan to return troops to their initial positions…We’ve made that clear privately. We’ve also made that clear publicly.”

The U.S. embassy in Yerevan last week called for “Azerbaijan to withdraw its armed forces to their original positions” in a press statement, while House Speaker Nancy Pelosi stressed that “this was initiated by the Azeris and that there has to be recognition of that” on a historic visit to Armenia earlier this month.

The notably strong language now coming from Western capitals about Azerbaijan’s recent attack contrasts sharply with the reaction from Moscow, which has issued more measured statements in response to the hostilities, despite its formal alliance with Armenia.

Meanwhile, the Collective Security Treaty Organization, a Russian-led military alliance, has pointedly declined to send military assistance to Armenia, prompting protesters in Yerevan to take to the streets demanding Armenia withdraw from the alliance.