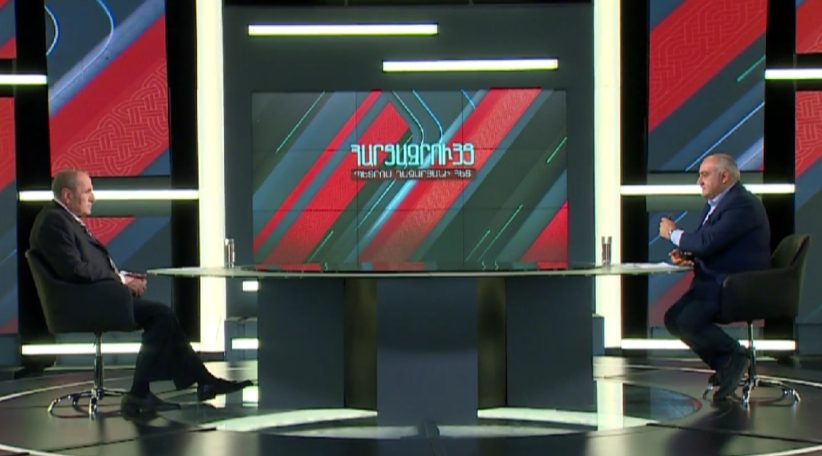 Armenian Prime Minister Nikol Pashinyan stressed at a press conference Monday that “it is necessary to sign an Armenia-Azerbaijan peace treaty,” while former President Levon Ter-Petrossian warned of “painful solutions” to the conflict in a widely publicized interview.

Speaking alongside French President Emmanuel Macron in Paris, Pashinyan said remarks by Azerbaijani President Ilham Aliyev and other officials in Baku suggesting that “there is no precise border between Armenia and Azerbaijan because the border is not delimited and demarcated (have) nothing to do with reality.”

“The administrative borders between Soviet Armenia and Soviet Azerbaijan became state borders” when the two countries joined the Commonwealth of Independent States in the early 1990s, Pashinyan argued.

Turning to “long-term solutions,” he said, “I think it is necessary to sign an Armenia-Azerbaijan peace treaty with mutual recognition of the borders reaffirmed” by the CIS treaty, as well as to open regional transit routes “in accordance with the national legislation of the countries through which they pass,” an implicit rebuke of Baku’s demands for a corridor to connect mainland Azerbaijan with Nakhichevan via Armenia.

“We also place importance on the settlement of the Nagorno-Karabakh issue, which will guarantee the rights and security of Nagorno-Karabakh’s Armenians,” Pashinyan added, calling for “discussions” between Baku and Stepanakert.

“Agreements should be signed with both Azerbaijan and Turkey. It will not be to anyone’s taste, but there comes a moment when there is no alternative,” he said. “Most of the opposition believes that, if we can get rid of Pashinyan, then we can avoid painful solutions. This is naivety. Whoever comes to power next will have to sign the same document, or maybe even a worse one.”

Ter-Petrossian continued: “Pashinyan is also afraid to sign a document. Whatever he signs, he will be called a traitor or a Turk. We even extend our hands out to Pashinyan, together we will choose the least painful option and thereby take responsibility upon ourselves. I am ready for that.”

Though it was not explicitly clear in the interview who exactly Ter-Petrossian meant by “we,” his comments were widely interpreted to include Armenia’s other ex-leaders, Robert Kocharyan and Serzh Sargsyan.

In a statement, the church said the group helds talks “regarding the situation Armenia finds itself in” and pledged to convene further meetings. It did not elaborate.

France, UK join US calls for Azerbaijan to withdraw from Armenia