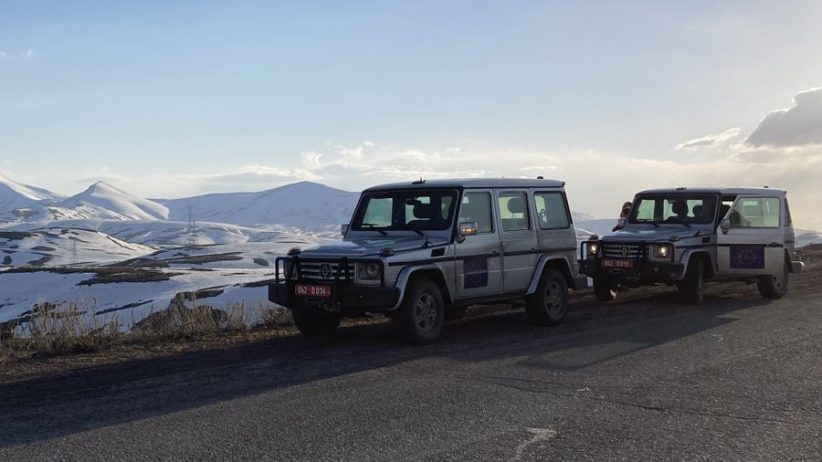 Since the end of the 2020 Nagorno-Karabakh war, Azerbaijan has pursued a strategy based on coercive diplomacy and military blackmail in negotiations with Armenia. Azerbaijan seeks to force Armenia to accept its two primary demands – to accept that Nagorno-Karabakh as a territorial administrative unit does not exist anymore and to provide Azerbaijan with a corridor via Syunik to reach the Nakhichevan Autonomous Republic. Military incursions into Armenia are one of the main tools used by Azerbaijan to push forward with its coercive strategy. As a result of multiple aggressive actions, Azerbaijan has occupied up to 200 square kilometers of Armenian territory. Russia and the CSTO provided muted reactions to Azerbaijani aggression, so Armenia decided to involve other international players to deter further attacks.

In this context, the deployment of the EU monitoring civilian mission to Armenia in late October 2022, was the right step to provide additional guarantees for security and stability along the Armenia – Azerbaijan border. It increased the EU’s involvement in the region and diversified Armenian foreign policy choices regarding its negotiations with Azerbaijan. The increase in EU involvement came parallel with advancing negotiations in the Brussels format.

Azerbaijan ratcheted up its pressure on Nagorno-Karabakh, closing the only route connecting Armenia with Nagorno-Karabakh on December 12. By imposing a blockade on Nagorno-Karabakh, which has continued for over a month, Azerbaijan triggered an acute humanitarian crisis for the Armenian civilian population. The corridor is blocked by “eco–activists,” who initially demanded access for the relevant Azerbaijani state institutions to monitor the copper-molybdenum mines in Nagorno-Karabakh. However, very soon, the list of demands started to increase – the resignation of the newly appointed state minister of the self-proclaimed Nagorno-Karabakh Republic, Ruben Vardanyan, and the establishment of an Azerbaijani checkpoint in the Lachin corridor were among the new demands added. Anyone, who has at least a basic understanding of the Nagorno-Karabakh conflict, and has followed the developments there since the end of the 2020 Nagorno-Karabakh war, has no doubts that what has been going on in the Lachin corridor for almost a month is connected with geopolitics, rather than benign environmental concerns.

Meanwhile, Azerbaijan continues to threaten Armenia with new military incursions. In the current circumstances, deploying a new EU observer mission to Armenia is of utmost importance, as it would decrease the likelihood of a new outbreak of hostilities. Meanwhile, the de-facto collapse of the Brussels negotiation platform after Azerbaijan canceled the December 7, 2022, summit between Armenia and Azerbaijan due to the controversies related to the participation of President Macron in further negotiations may create additional obstacles for the launch of the new EU observer mission in Armenia.

The EU perceives the deployment of the EU monitoring capacity in Armenia as a tool within the overall framework of peace negotiations facilitated by the EU. Some circles in Armenia believe that the EU sent observers to Armenia only to deter future possible Azerbaijani aggression, to play the role of a buffer, and to provide Armenia with the necessary time to increase its military capabilities and be able to repel future Azerbaijani aggression on its own. According to this logic, regardless of the pace of negotiations, the EU will decide to send a new mission to Armenia, with an extended duration and increased numbers of observers, to support Armenia in resisting military pressure from Azerbaijan.

However, the EU’s perception is probably different. The EU views the potential deployment of a new observer mission from a different angle. It is meaningful only if Armenia and Azerbaijan are engaged in serious peace negotiations, where the EU plays a significant role. In this context, the de-facto collapse of the Brussels format of negotiations may pull the EU to the margins of the negotiation process, making any future deployment of an EU observer mission less attractive and meaningful for the EU. The failure of the Brussels format may leave Armenia – Azerbaijan negotiations being conducted under either Washington or Moscow platforms, which will insert the process fully into the context of ongoing Russia – US animosity, with no benefits for anyone.

In the current circumstances, if Armenia is interested in having a new EU observer mission in Armenia in 2023, and in continuing negotiations with Azerbaijan in a geopolitically neutral environment and whilst avoiding being entirely trapped in the US – Russia conflict, it should take tangible steps to reinvigorate the Brussels format and bring back the EU as the leading facilitator of Armenia – Azerbaijan negotiations. The restoration of the Brussels format also depends on the Azerbaijani position, but Yerevan should do everything to show its willingness and readiness to re-engage with the EU. Otherwise, if the Brussels negotiation format continues to be more dead than alive, the EU may lose interest in deploying a new observer mission to Armenia.