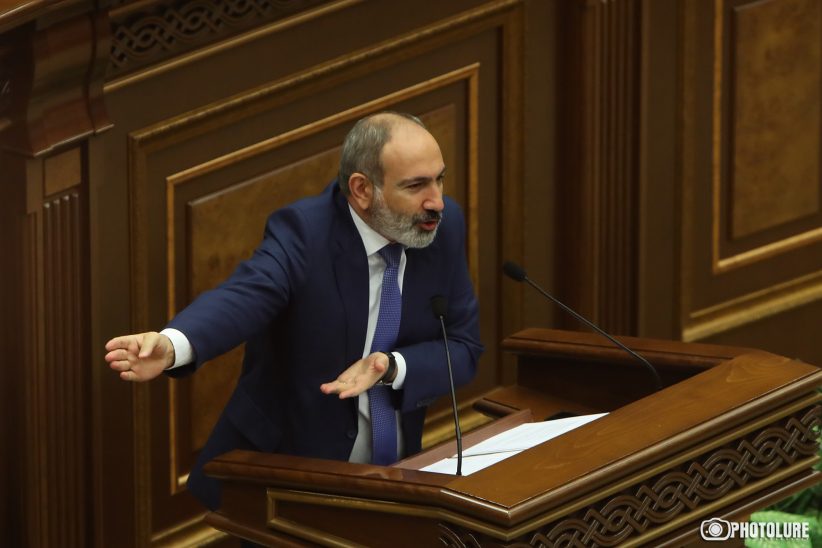 The Armenian government is “ready to start the process” of concluding a peace treaty with neighboring Azerbaijan after more than 30 years of conflict, Prime Minister Nikol Pashinyan underlined in a major speech to parliament Wednesday.

“Opening an era of peaceful development for our country and region has been adopted as a state strategy,” he announced.

Pashinyan explained that last month Baku sent Yerevan a set of “principles” on which to base peace talks, adding that “there is nothing unacceptable for us in them.”

The principles, according to Pashinyan, include the mutual recognition of territorial integrity, mutual confirmation of the absence of territorial claims, and mutual obligation not to use force in resolving disputes in the region.

The delimitation and demarcation of the Armenia-Azerbaijan border, establishment of diplomatic relations, and unblocking of transport and communication links are also to be set as principles for the peace talks, Pashinyan said.

The Armenian government’s apparent willingness to accept such principles has fueled concerns in the country that the government is preparing to cede control over Karabakh to Azerbaijan.

In his speech, Pashinyan said that the bar for what Armenia will be able to achieve in peace talks with Azerbaijan should be “slightly lowered,” noting the difficult geopolitical situation the country now finds itself in following its devastating military defeat in 2020.

To that end, he noted that the Armenian government had changed its focus from negotiating over Karabakh’s final status to ensuring the “security guarantees and rights” of Karabakh’s Armenian population.

“In this situation, status is not the goal, but a measure to ensure the security and rights of the Armenians of Nagorno-Karabakh,” he said.

In his speech, Pashinyan notably refrained from using the terms “self-determination” or “remedial secession,” two concepts in international law that Armenian administrations before the 2020 war in and around Karabakh often invoked when discussing potential peace in the region.

Self-determination refers to the right of a group of people to choose their sovereignty and political status freely, while remedial secession holds that, in situations where injustices suffered by a group of people are very severe, secession becomes the only viable solution to preventing further injury.

Despite his apparent willingness to agree to Baku’s principles for peace negotiations, Pashinyan did not mince words when discussing Azerbaijan’s recent actions in the region.

He slammed Azerbaijani troops for advancing last month on the Karabakh village of Parukh, known as Furukh during Soviet times, forcing its Armenian residents to flee. Russian peacekeepers quickly reestablished control over the area.

“We should not have illusions. What has been and is still one of the biggest problems of the Karabakh issue? That its resolution, this or that formula for resolution, does not depend on us only,” Pashinyan said, alluding to Azerbaijan’s past intransigence in negotiations.

Pashinyan also criticized the work of the Russian peacekeeping contingent stationed in and around Karabakh, as well as the Russia-led military alliance of which Armenia is a member.

The Russian peacekeepers’ inability last month to prevent Azerbaijani troops from briefly capturing Parukh – which lies in the contingent’s zone of responsibility – raises serious concerns over their effectiveness and competence, Pashinyan argued.

He slammed the Russian troops for apparently blocking the entry of a number of Armenian lawmakers to Karabakh on Tuesday, calling the move “perplexing” and noting that it “contradicts the terms” of the November 2020 ceasefire agreement that resulted in Russia’s deployment of peacekeepers to the region.

Pashinyan also had harsh words for the Collective Security Treaty Organization, a military alliance that includes Russia, Armenia, and four other ex-Soviet states.

Last May, the CSTO largely ignored Pashinyan’s calls for help following the incursion of Azerbaijani troops into the easternmost portions of Armenia’s Gegharkunik and Syunik regions, saying that the incident did not fall under the alliance’s charter on collective defense. Azerbaijani forces remain in control of about 45 square kilometers of Armenian territory to this day.

“How the CSTO reacted to what had happened, I think, was also a failure for the organization,” he said. “The fact is that the CSTO has not addressed this situation in any way, even as an observer.”

The CSTO’s failure to respond to Azerbaijan’s incursion has “justified the long-held fears among the Armenian public that the organization, which is of key importance to Armenia’s security system, will do nothing at the necessary moment,” Pashinyan added.

At the same time, Pashinyan noted that he continues to support the idea of working with the Minsk Group to pursue peace in the region, saying that “we have not given up on this idea.”

The Minsk Group is a body under the auspices of the Organization for Security and Co-operation in Europe that was formed in the 1990s to encourage peaceful resolution of the conflict between Armenia and Azerbaijan. It is co-chaired by France, Russia, and the United States.

Recent weeks have seen the group’s future thrown into doubt, as relations between Europe and the United States, on the one hand, and Russia, on the other, sharply deteriorate over the latter’s February invasion of Ukraine.

In his speech, Pashinyan also referred to the news that came out of his meeting with Azerbaijani President Ilham Aliyev earlier this month in Brussels that the two sides had agreed to convene a joint commission to demarcate and delimit their border.

It is not possible at present to say how long the demarcation and delimitation process will last, Pashinyan argued, noting that it will be a complex undertaking with “many nuances.”

“To give a concrete assessment over timetables, it’s very difficult. By the end of April we know for sure that the commission must be formed, and then the commission will answer the remaining questions,” he said.

Delimitation refers to the process by which a border is legally defined, while demarcation involves the process of physically marking a border, such as by building a fence or wall, according to the Organization for Security and Co-operation in Europe.

More than 30 years on from the collapse of the Soviet Union, the border between Armenia and Azerbaijan remains undelimited and undemarcated, as does the Armenia-Georgia border. In Soviet times, those borders were internal, and so officially defining them was not an issue of concern for the authorities in Moscow.

Armenia must have “active” foreign policy in neighborhood, Pashinyan says