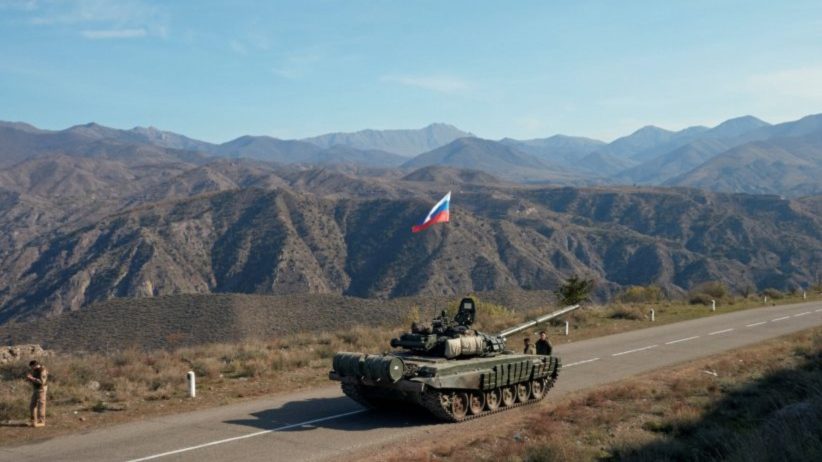 A briefing published last Friday by the International Crisis Group warns of “escalating hostilities” in and around Karabakh as war in Ukraine continues to rage — and also includes numbers and insights on the military situation in the region from officials on all sides that appear not to have been reported previously.

The Ukraine war has impacted “and unfortunately, is going to continue impacting” the situation on the ground in Karabakh, explained Olesya Vartanyan, the organization’s senior analyst for the South Caucasus. “That’s the main reason why we decided to go forward with this paper.”

Indeed, “officials in Yerevan and de facto authorities in Stepanakert fear that Baku will take advantage of Russian and Western preoccupation with the war in Ukraine to recapture more land in Armenian-populated Nagorno-Karabakh,” the paper warns.

Moreover, “the Ukraine war may diminish Moscow’s leverage and block the Kremlin from collaborating openly with France and the U.S., the other co-chairs of the main forum for talks on peacemaking,” the briefing says.

“I think what’s really very important about this paper is…to understand the incentives that the different sides may have, because these incentives also demonstrate the possible threats that are still in place,” Vartanyan said.

New numbers on the military situation in Karabakh

The paper notably contains several figures on the military situation in Karabakh that appear to be previously unreported.

First, the briefing estimates the number of ethnic Armenian soldiers in and around Karabakh at 12,000, “just over half the size of the force commanded by the de facto entity prior to the 2020 war.”

What’s more, “to all appearances, Armenia does seem to have withdrawn all its personnel, while forces of the de facto authorities…remain under arms,” the paper notes.

In addition, Yerevan “is providing no new weapons to the de facto authorities. When individual Armenian military personnel have tried to cross into Armenian-populated Nagorno-Karabakh, Russian peacekeepers…refused them entry.”

These and other fresh insights were taken from interviews conducted by the Crisis Group with officials, diplomats, journalists, military experts, and residents on the ground, almost always anonymously, Vartanyan explained.

“This is done, in fact, on purpose,” she said of the organization’s decision not to name sources. “It gives people more space to speak about what’s happening.”

“We make all possible attempts to fact check,” she continued. “In that sense, we are following some of these basic rules that many journalists have as well, like double sourcing.”

The paper also provides numbers on the Russian peacekeeping contingent stationed in Karabakh that appear to be new: “They now number only 1,600 soldiers, fewer than the 1,960 permitted by the agreement, and well below the 4,000 civilian and military personnel deployed in the war’s immediate aftermath.”

The briefing cites “a Russian academic closely affiliated with the Russian peacekeeping forces in Nagorno-Karabakh” for the figure.

“Unfortunately I cannot go into more details about this particular (source),” Vartanyan told CivilNet. “But this is really a very good source, I can tell you.”

Vartanyan also pointed out that all Crisis Group briefings and reports, which are considered authoritative and widely cited, “go through an enormous investment into editing and also fact-checking” before publication.

“In addition to that, we have a separate unit of lawyers who are looking into our papers…and (determining) whether there can be some legal consequences to our work.”

“This is the only way how you can proceed with doing this work that we do on these sensitive topics that are often very toxic as well.”

Notably, the briefing also states that Azerbaijani officials continue to place value in the work of the OSCE Minsk Group, despite public statements by President Ilham Aliyev calling the group “paralyzed” and “meaningless.”

A “senior Azerbaijani diplomat” told the Crisis Group last month that “they see the OSCE Minsk Group as potentially valuable in supporting confidence-building measures,” even though “Baku formally rejects the OSCE process.”

Still, rising tensions between ethnic Armenian and Azerbaijani forces in and around Karabakh could derail ongoing talks to establish peace in the region.

“Recent weeks saw a rise in violence greater than any since” the 2020 war, the briefing notes. “Starting in February, the region’s de facto leadership has reported near-daily military incursions, shelling and other dangerous activities, and Azerbaijani authorities also noted skirmishes.”

According to the paper, those incidents include attacks on the Armenian-inhabited villages of Parukh (also known in Soviet times as Farukh) and Khnapat (Khanabad), multiple interruptions to a pipeline delivering gas from Armenia to Karabakh through territory captured by Azerbaijan in 2020, and ongoing threats to farmers and herders working along the line of contact.

The detention of ethnic Armenian soldiers and civilians in Azerbaijan remains another key source of tension between Yerevan and Baku.

The briefing “demonstrates the continued threat of these relatively smaller-scale incidents that can spiral out into something bigger, with consequences that will be very difficult to address for countries like Russia, which is very much not interested in having a second front while it’s in Ukraine,” Vartanyan said.

The potential for escalation in Karabakh should also concern “those in the Western states,” she continued, “because they have previously relied mainly on Russia, and now they have a very hard time talking to Moscow.”

The briefing recommends that “outside actors such as Russia, France, the U.S., the OSCE, the EU and Turkey – as well as Azerbaijan and Armenia themselves” focus first on taking lower-stakes, confidence-building measures as a way to “create space for the parties to ease tensions.”

Those steps could include efforts to unblock regional transport and economic links, a commitment made by both Armenia and Azerbaijan in the Russia-brokered ceasefire agreement of 2020.

“Difficult as it will be, these external actors should find a way to work together lest the opportunity that now exists be lost and the region’s people face another bout of destabilising and damaging conflict.” the paper argues.