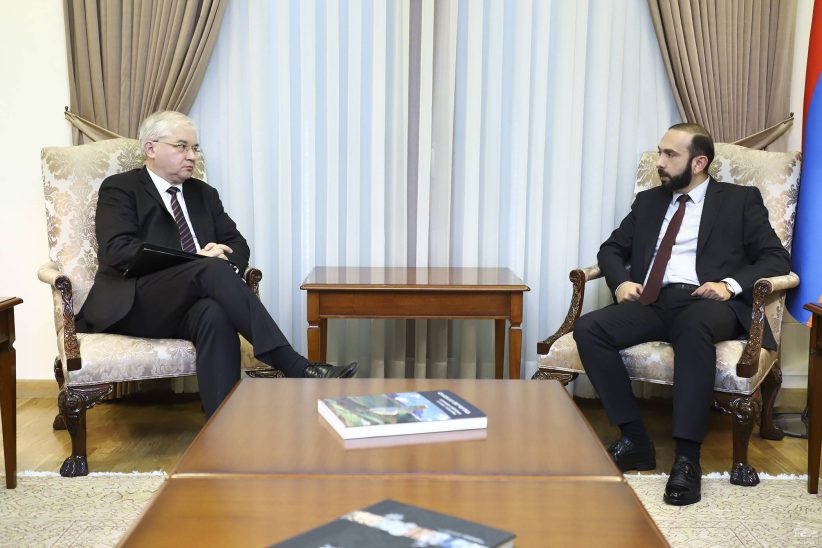 Foreign Minister of Armenia Ararat Mirzoyan meets Igor Khovaev, the Russian Co-Chair of the OSCE Minsk Group, Special Representative of Foreign Minister of Russia on the issues of supporting the normalization of relations between Armenia and Azerbaijan.

Khovaev’s and Reeker’s visits to the region come the same day Azerbaijan launched a major attack on a number of towns and villages in Armenia’s eastern and southern Gegharkunik, Vayots Dzor, and Syunik regions.

So far Armenia has reported 49 soldiers killed in action and three civilians injured, one critically. Azerbaijan has said its forces have also sustained casualties, but it has yet to release any figures.

Armenian Prime Minister Nikol Pashinyan on Tuesday made separate phone calls to Russian President Vladimir Putin and U.S. Secretary of State Antony Blinken, among a number of other officials.

Meanwhile, Armenian Foreign Minister Ararat Mirzoyan spoke by phone with his Russian counterpart, Sergey Lavrov, and with Karen Donfried, the head of the Europe and Eurasia bureau at the State Department.

Russia and the United States, alongside France, co-chair the Minsk Group, a body that has led efforts to mediate a peaceful resolution to the conflict between Armenia and Azerbaijan for many years, largely without result.

France to raise Azerbaijan’s attack on Armenia at UN, while CSTO ‘activates mechanisms’