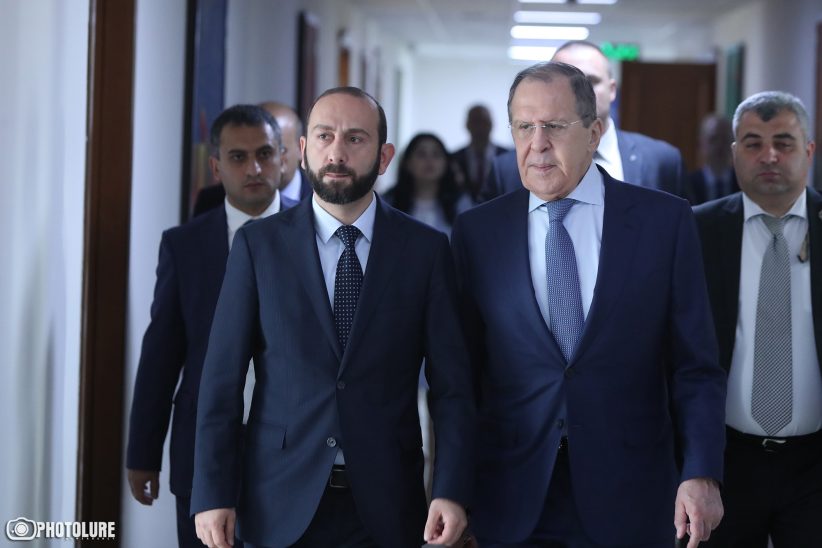 The Collective Security Treaty Organization, a Russian-led military alliance, is “ready” to dispatch its own observers to the Armenia-Azerbaijan border, Russian Foreign Minister Sergey Lavrov told his Armenian counterpart, Ararat Mirzoyan, at a meeting Wednesday in Kazakhstan.

“The idea is to send a monitoring mission of CSTO observers to the territory of Armenia on the border with Azerbaijan,” Lavrov said to Mirzoyan. “The only thing required is the decision of the Collective Security Council, which must be convened by the organization’s chairman. That is currently Armenia. As soon as you have free time, we will be ready to formally approve this mission, and it can get to work.”

Lavrov’s remarks came just one day after the European Union formally agreed to send its own civilian mission to the Armenia-Azerbaijan border, prompting Moscow to accuse Brussels of interference and attempting “to oust our country’s mediation efforts.”

The EU mission is set to arrive by the end of the month and work until the end of the year at the latest, according to a joint readout of a meeting between Armenia and Azerbaijan’s leaders last week in Prague, where the mission was initially agreed to.

Notably, the EU mission will be stationed on the Armenian side of the border, as would be the CSTO mission, if approved.

Last week, the EU’s foreign policy chief, Josep Borrell, said Azerbaijan had previously rejected an EU offer to dispatch a border mission to the region. It remains unclear what changed.

TASS reported Wednesday that sending a CSTO mission to the Armenia-Azerbaijan border was among a number of recommendations put forward by Stanislav Zas and Anatoly Sidorov, two senior CSTO officials, after visiting Armenia last month.

That prompted unusually harsh criticism of the CSTO in Armenia, with Armen Grigoryan, the chief of Armenia’s Security Council, telling Radio Azatutyun days after the attack that Armenia’s “expectations have not been met.”

Referring to the alliance’s swift and decisive response to mass civil unrest that shook fellow alliance member Kazakhstan in January, Grigoryan added: “There was such a hope (that the CSTO would react similarly in Armenia), and naturally, that hope has been dashed.”

Mirzoyan also had unusually strong words for Lavrov at their Wednesday meeting, saying, “Some, one might say, neutral, not so friendly countries, with which we do not have such a longstanding history of friendship and alliance (as we have with Russia), gave speeches (at the United Nations Security Council) that were more objective and more clearly reflected the situation on the Armenian-Azerbaijani border.”

Lavrov and Mirzoyan are currently in the Kazakhstani capital of Astana for a summit of foreign ministers from members of the Commonwealth of Independent States, a grouping of nine post-Soviet countries. Armenia, Azerbaijan, and Russia are all members.

Lavrov and Mirzoyan are set to hold a three-way meeting with their Azerbaijani counterpart, Jeyhun Bayramov, on Friday. Those talks were convened “at the initiative of the Russian side,” Armenia’s Foreign Ministry has noted.

Armenia and the fear factor