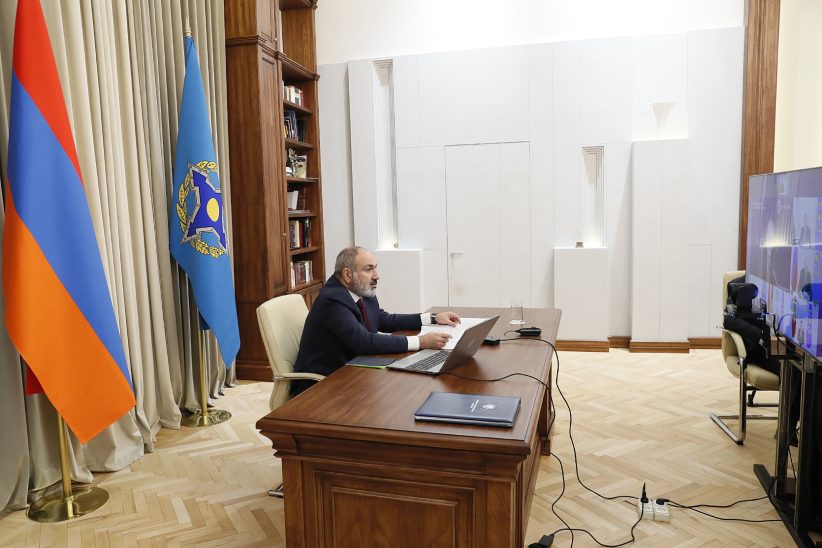 The Collective Security Treaty Organization, a Russian-led military alliance, has ended a special session on “the escalation of the situation on the Armenian-Azerbaijani border” by calling on the two countries to reach a peaceful resolution to their conflict.

“A firm conviction was expressed that the existing conflicts and contentious issues should be resolved by political and diplomatic means, including in line with the agreements set out in the tripartite statements,” the CSTO said in a statement Friday.

The term “tripartite statements” refers to three joint statements issued by Armenia, Azerbaijan, and Russia since the end of the 2020 Karabakh war that form the basis for Russia’s mediation efforts.

The first statement established a ceasefire in Karabakh. The second formed a joint working group to reopen regional transit routes. The third reaffirmed the parties’ commitment to the earlier two statements.

In its statement, the CSTO added that “following the session, members of the CSTO collective security council made a number of proposals for finalizing drafts of relevant decisions.” It did not elaborate.

Armenian Prime Minister Nikol Pashinyan’s office told the Armenpress news agency that the foreign ministers of the CSTO member states had been “instructed to come to a draft decision” after Friday’s session. It remains unclear what that may entail, and the alliance itself has not confirmed that news.

Pashinyan’s office also told Armenpress that a report, compiled by senior CSTO officials after a fact-finding visit last month to Armenia, acknowledges that Azerbaijan invaded Armenia and calls on Baku to withdraw its forces.

Those points correspond to positions Pashinyan has publicly taken, saying earlier this week: “There are very clear expectations: first, that the CSTO issues a clear political assessment of what happened, and second, that the CSTO adopts a roadmap on restoring Armenia’s territorial integrity.”

The CSTO’s report has not been made public, and the alliance has not commented publicly on its contents, though Russian Foreign Minister Sergey Lavrov has said that sending CSTO observers to the region is among the recommendations put forward in the report.

Lavrov told Armenian Foreign Minister Ararat Mirzoyan earlier this month that the alliance stands “ready” to dispatch a mission to the Armenia-Azerbaijan border.

It has not been made public whether a potential CSTO border mission was discussed at Friday’s special session.

Armenia, which currently holds the CSTO’s rotating chair, called the session, as the alliance’s lackluster response to Azerbaijan’s attack continues to prompt unusually harsh criticism of the alliance in Yerevan.

“We see that it is the CSTO that has withdrawn from Armenia, and not vice versa. If the CSTO has indeed withdrawn, then they should let us know, so that we’ll be able to protect our borders with some other mechanisms,” Alen Simonyan, Armenia’s parliament speaker and a close Pashinyan ally, said earlier this week.

Armen Grigoryan, the head of Armenia’s Security Council, said bluntly last month that Armenia’s “expectations (from the CSTO) have not been met.”

Meanwhile, the Kremlin confirmed Friday that Russian President Vladimir Putin will convene a major summit with Pashinyan and Azerbaijani President Ilham Aliyev on Monday. Pashinyan had previously said he would attend, while Aliyev has not yet said publicly he will take part.

In a statement, the Kremlin said the leaders would “consider progress in implementing the trilateral agreements…(and) further steps to strengthen stability and security in the South Caucasus. Issues of restoring and developing trade-economic and transport ties will also be discussed.”

Earlier in the day Friday, Pashinyan wrote on Twitter he supports a Russian-backed peace plan with Azerbaijan. Pashinyan said earlier this week he wants to reach a peace deal with Azerbaijan by the end of the year.

Recent developments suggest Moscow is trying to reassert its role in mediating between Yerevan and Baku, after appearing preoccupied for months by its full-scale war against Ukraine.