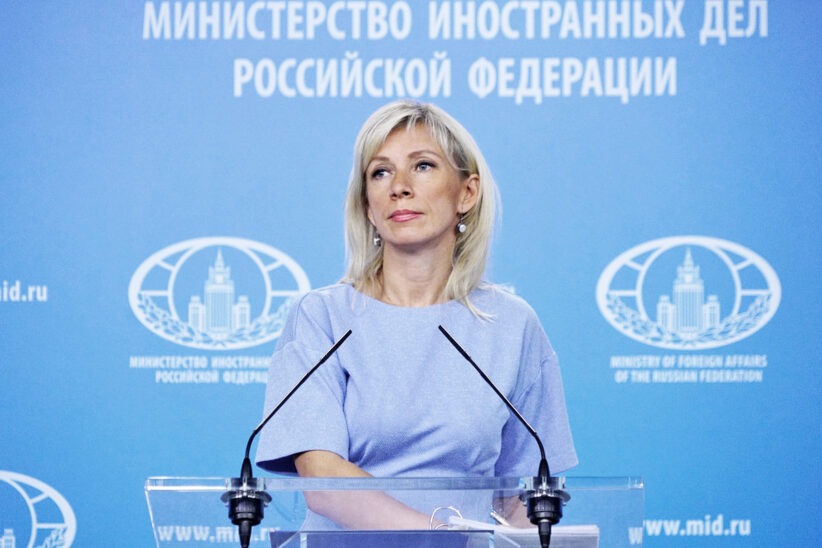 Russia is committed to Azerbaijan’s five-point peace plan with Armenia and plans to dispatch its special representative for Armenia-Azerbaijan peace to Baku “in the near future,” announced Foreign Ministry Spokeswoman Maria Zakharova at a press conference in Moscow Wednesday.

She stressed that “dialogue is based on the basic principles proposed by Baku for establishing interstate relations between Azerbaijan and Armenia,” according to TASS, the Russian state-owned news agency.

The ‘basic principles’ to which Zakharova was referring were published by the Azerbaijani Foreign Ministry last month to lay the groundwork for peace talks.

Among the principles were mutual recognition of territorial integrity, mutual confirmation of the absence of territorial claims, and mutual obligation not to use force in resolving disputes.

Delimiting and demarcating the Armenia-Azerbaijan border and unblocking transport connections in the region — two initiatives Russia has championed since the end of the 2020 war in and around Karabakh — were also set as bases for negotiations.

Armenian Prime Minister Nikol Pashinyan has said that “there is nothing unacceptable for us” in the proposals, which, alongside his controversial speech to parliament last week, has fueled concerns that Armenia is preparing to recognize Azerbaijan’s claims over Karabakh as part of the peace negotiations.

On Wednesday, Zakharova also underlined the major role that the Kremlin hopes Igor Khovaev, Russia’s special representative, will play in the peace talks.

“Among (his) main tasks is to provide assistance to our Azerbaijani and Armenian partners in preparing a peace agreement. The special representative has already actively joined in the work and held useful consultations in Yerevan. His visit to Baku in the near future has been agreed to,” she said.

Last week, Zakharova announced that Khovaev, previously Russia’s co-chair to the Minsk Group, had been appointed to a new position as Russia’s special representative for the normalization of Armenia-Azerbaijan relations.

“Ambassador Khovaev will continue his work in a new capacity,” she said. “The focus of his attention will be the preparation of a peace treaty.”

Khovaev’s new title underscores ongoing uncertainty over the future of the Minsk Group, which was formed by the Organization for Security and Co-operation in Europe in the 1990s and is meant to encourage the peaceful resolution of the conflict between Armenia and Azerbaijan.

France, Russia, and the United States co-chair the group, but rising tensions between the West and Russia over the latter’s brutal invasion of Ukraine in February have cast doubts on the group’s future ability to function.

Earlier this month, Russian Foreign Minister Sergey Lavrov accused France and the United States of refusing to work with Russia via the Minsk Group, calling the West’s behavior “absolutely irresponsible.”

“I do not know what (the Minsk Group’s) future will be, as our so-called French and American ‘partners,’ in a fever of Russophobia, are trying to cancel everything that has links with the Russian Federation,” he said.

For their part, France and the United States have since reaffirmed their commitment to resolving the Karabakh conflict through Minsk Group mediation, with both countries sending their respective Minsk Group co-chairs to Yerevan in the past few weeks.

But State Department Spokesman Ned Price sowed more confusion at a press briefing earlier this week, appearing unable to answer a reporter who questioned U.S. co-chair Andrew Schofer’s exact title.
“I don’t have the details on this individual’s travel or in what capacity he was acting at the time, but we’ll get back to you if we have anything more to add there,” he said.

Armenia continues to improve its democracy score, according to new report

2023 European Weightlifting Championships to be held in Yerevan