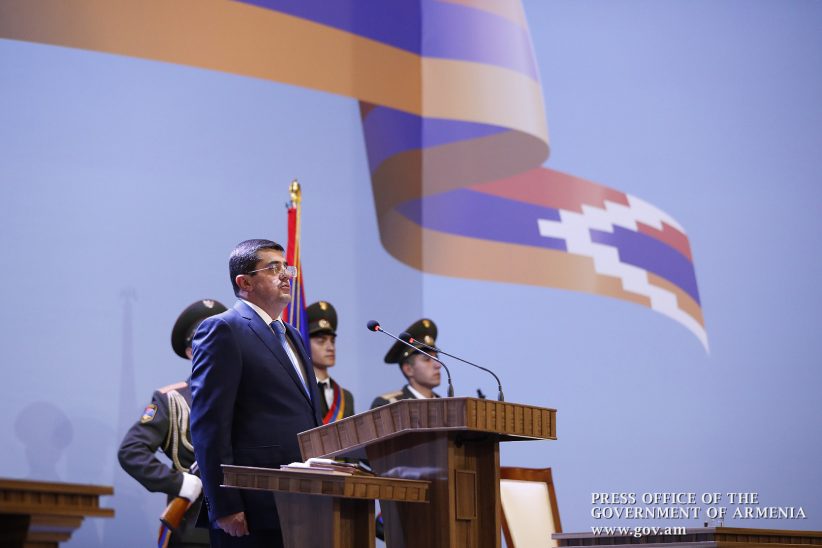 Arayik Harutyunyan, the president of the unrecognized Nagorno-Karabakh Republic, held a series of meetings Wednesday with other high-level Karabakh officials and representatives of local nonprofits as concerns grow over Armenian Prime Minister Nikol Pashinyan’s position in ongoing peace talks with Azerbaijan.

“Our society presents very clear demands, which we must meet by organizing comprehensive discussions,” Harutyunyan said after meeting with representatives from the local parliament, Foreign Ministry, and Security Council. “A wide range of issues related to external challenges were discussed during the meeting.”

The flurry of activity in Karabakh comes in response to growing concern, both there and in Armenia itself, over statements made by Pashinyan to Armenia’s parliament Wednesday suggesting that the Armenian government could be preparing to cede control of Karabakh to Azerbaijan.

“Today, the international community clearly tells us that being the only country in the world that does not recognize the territorial integrity of Turkey’s ally Azerbaijan at the bilateral level is fraught with great danger not only for Artsakh (Karabakh), but also for Armenia,” Pashinyan said.

“Today, the international community is telling us again: lower your bar a little on the status of Nagorno-Karabakh and ensure greater international consolidation around Armenia and Artsakh,” he continued.

Other comments Pashinyan made in his speech – including stating that Karabakh’s status “is not the goal, but a measure to ensure the security and rights of the Armenians of Nagorno-Karabakh” — also seem to suggest an openness on Yerevan’s part to recognize Baku’s claims over Karabakh.

Noted Karabakh analyst Tigran Grigoryan said he agreed with those who view Pashinyan’s comments as an implicit recognition of Azerbaijan’s claims over Karabakh in a recent column for CivilNet.

“During recent visits to Yerevan, EU officials probably tried to explain to the Armenian authorities that raising the issue of Nagorno-Karabakh’s independent status after the defeat in the second Karabakh war was unreasonable,” Grigoryan explained.

“The Armenian authorities have obviously accepted these EU conditions, as they did not see any particular prospects for Nagorno-Karabakh to achieve an independent status.”

Regardless, Harutyunyan has repeatedly stated his objections to Azerbaijan controlling Karabakh, saying on the same day Pashinyan gave his speech that “subordination (to Azerbaijan) is impossible, it is unacceptable.”

Pashinyan’s comments also prompted outrage from Armenia’s domestic opposition, with Armenia Alliance lawmaker Gegham Manukyan saying that “there is one solution: Pashinyan and those who implement this policy must go.”

Former President Serzh Sargysan, who led Armenia from 2008 to 2018 and is himself a Karabakh native, had harsh words for Pashinyan as well, calling him a “liar and manipulator” who “misleads the public” on Yerevan’s negotiations with Baku.

Arman Tatoyan, who served as Armenia’s human rights ombudsman from 2016 to 2022, also chimed in, writing on Facebook that “Armenia’s security system is simply destroyed by such statements, which are conditioned by narrow political interests.”

The day before Pashinyan’s speech, opposition politicians from the Armenia Alliance and I Have Honor Alliance who attempted to travel to Karabakh were turned back by Russian peacekeepers stationed there without explanation. (Armenian Foreign Minister Ararat Mirzoyan later said that the peacekeepers blocked the lawmakers from entering Karabakh to “avoid provoking” Azerbaijan.)

The incident prompted criticism of the Russian peacekeeping contingent in Karabakh from across Armenia’s political spectrum, a rare feat in Armenia’s fractured and polarized political landscape.

In his speech, Pashinyan called the peacekeepers’ action “perplexing” and noting that it “contradicts the terms” of the November 2020 ceasefire agreement that resulted in Russia’s deployment of peacekeepers to the region.

But Pashinyan did not stop there in his criticism of the Russian peacekeepers: He also lambasted their inability last month to prevent Azerbaijani troops from briefly capturing the Armenian-inhabited village of Parukh (also known as Furukh), which lies in the peacekeeping contingent’s zone of responsibility in Karabakh.

In sharp contrast, Harutyunyan, the Karabakh leader, said Tuesday at a meeting with residents of the Karabakh town of Martakert that Russian peacekeepers should be deployed in the region “indefinitely,” saying that the “fragile peace in the conflict zone is possible due to the Russian peacekeeping forces.”

In a statement to CivilNet, Gegham Baghdasaryan, the director of the Stepanakert Press Club, noted that the harsh criticism of Pashinyan coming out of Karabakh “overshadows the extent of the responsibility of the Artsakh authorities in both the defeat in the war and in finding a way out of the difficult post-war situation.”

“Meanwhile, it will be possible to change the destructive course of developments only if the Artsakh authorities pursue an independent policy and Artsakh becomes an independent military-political factor.”

On Thursday, Karabakh’s parliament announced that it would be convening for a special session in the evening related to Pashinyan’s speech.