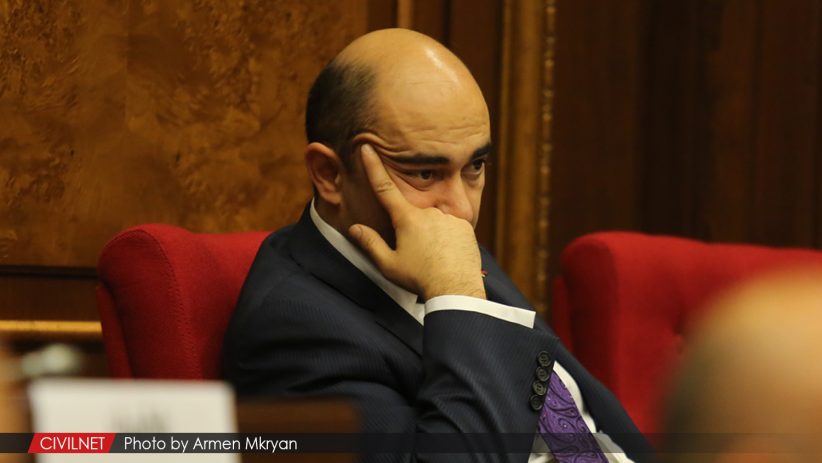 Armenia is “satisfied” with progress made on peace talks with Azerbaijan at Monday’s summit in the Russian city of Sochi, the country’s ambassador-at-large, Edmon Marukyan, told CivilNet in an interview Tuesday.

While conceding that the joint statement adopted after Monday’s lengthy talks did not “include all the formulations” that Armenia put forward, Marukyan stressed that every issue Armenia wanted to raise had been discussed “meticulously” and “clearly.”

“The formulations that the Armenian side wouldn’t accept aren’t included in the text. Same with the Azerbaijani side. But that doesn’t mean that, during the oral discussions, all the issues weren’t discussed,” Marukyan said. “They were discussed meticulously. We are satisfied with the meeting, because all the issues were raised, and Armenia has clearly stated our bars (positions).”

Marukyan’s insights about the negotiation process in Sochi are some of the first to be made public.

Russian President Vladimir Putin noted Monday that “frankly, it was not possible to agree upon everything, (and) some things had to be removed from the text previously worked out at the specialist level.” When asked by reporters to elaborate, he declined.

Marukyan said Armenia’s negotiators were “satisfied” with the Sochi summit because it showed that two competing peace tracks — a Western one and a Russian one — are not “contradictory.”

The two tracks were “combined through Sochi, because Sochi reiterated the formulations of the Prague statement,” Marukyan said. “The Prague statement was continued in the Sochi format, and that means they are able to be combined.”

“Azerbaijan’s approach or plan (in Sochi) was to alter or annul the agreements reached in Prague,” Marukyan claimed. “But the Armenian side was able to clearly argue that the Prague agreement does not contradict all the tripartite agreements that were reached before. And the Armenian side pushed that approach to the very end, that whatever was reached in Prague needed to be restated in this statement. And it was restated. Now, are we satisfied or dissatisfied with that? Naturally, we are satisfied.”

Marukyan stressed that the agreement reached in Prague for each side to recognize the other’s territorial integrity, in line with the United Nations charter and Alma-Ata protocols, was an Armenian initiative.

The UN charter established the principle of territorial integrity, while the Alma-Ata protocols say that communist-era administrative boundaries became state borders after the Soviet Union’s collapse.

That language was first included in a joint statement issued by Armenia and Azerbaijan following talks last month in Prague, and reaffirmed in their statement Monday in Sochi.

Karabakh was not mentioned by name in the Sochi statement, which noted only the “key contribution of the Russian peacekeeping contingent to ensuring security in its deployment zone.”

Armenia’s negotiating team “insisted to the very end to include a formulation about Nagorno-Karabakh” in the statement, Marukyan said, “but it was not included because Azerbaijan did not agree to it.”

Still, it is important to note, Marukyan argued, that the Sochi statement referenced the November 2020 ceasefire, which does include language about an entity called “Nagorno-Karabakh” and the existence of a “Nagorno-Karabakh conflict.”

At a one-on-one meeting preceding the summit, Azerbaijani President Ilham Aliyev told Russian President Vladimir Putin that “the Karabakh conflict is already history, this was solved two years ago, therefore in this context there is practically nothing to discuss.”

Despite Karabakh not appearing in the Sochi statement, “30 percent or more” of the talks were dedicated to the Karabakh issue, Marukyan claimed.

The authorities in Stepanakert should hold their own talks directly with Baku, he added: “Nagorno-Karabakh needs to enter into negotiations with its issues, its own agenda, bring its own agenda. We will support them, we will have their back in every way.”

In Sochi, Armenia’s negotiators also raised the possibility of extending the mandate of the Russian peacekeepers stationed in Karabakh, according to Marukyan, who said the issue was not included in the final statement due to Azerbaijani objections.

Still, the very fact that Armenia’s negotiators raised the issue was significant, Marukyan argued: “Before the Sochi meeting, there was no such thing on the agenda, it wasn’t on the agenda at all.”

Days before the summit, Armenian Prime Minister Pashinyan said he was ready to sign a document in Sochi that would extend the Russian peacekeepers’ mandate by up to 20 years, but the Sochi statement did not extend the mandate, currently set to expire in 2025.

Withdrawal of Azerbaijani troops from Armenia

Marukyan said Yerevan insisted that Baku return its troops to their positions prior to the May of 2021, which saw Azerbaijan’s first major incursion into Armenian territory since the 2020 Karabakh war.

Azerbaijan’s negotiators responded by demanding Yerevan withdraw its troops from Karabakh, according to Marukyan, ostensibly referring to the region’s local army.

Armenia says it does not currently have any of its own troops in Karabakh.

According to Marukyan, Armenia reiterated that it is ready to reopen regional transit routes, including an overland connection between mainland Azerbaijan and Nakhichevan, but stressed that any routes running through Armenian territory would “function in accordance with Armenian legislation.”

Armenia is willing to accept Russian oversight of the routes, Marukyan said, adding that Yerevan would also “like to see a third party” get involved in oversight. He did not elaborate.

The 2020 Karabakh ceasefire calls for the “unblocking of all economic and transport links in the region” and says that Russian border guards should control the routes.

The issue of securing the release of all remaining Armenians detained in Azerbaijan was “discussed very meticulously,” Marukyan said, stressing that Yerevan is “doing everything it can to raise the issue and move it forward.”

An unknown number of Armenian soldiers and civilians remain in Azerbaijan, many sentenced to lengthy prison terms on terrorism charges.

Steps to achieve a peace treaty

According to Marukyan, Armenia has said it is ready to sign a peace deal with Azerbaijan only after Azerbaijani troops would withdraw from Armenia, the two countries’ border is fully delimited, and assurances are made for “the rights, freedoms, and security of Nagorno-Karabakh’s Armenians.”

Pashinyan has said he wants to reach both a peace deal and a separate border delimitation agreement with Azerbaijan by the end of the year.

Also watch (in Armenian): The Prague statement was reaffirmed in Sochi: An interview with Edmon Marukyan

“We must do everything possible to raise awareness about the importance of the sciences”, Dr. Gayane Melikyan