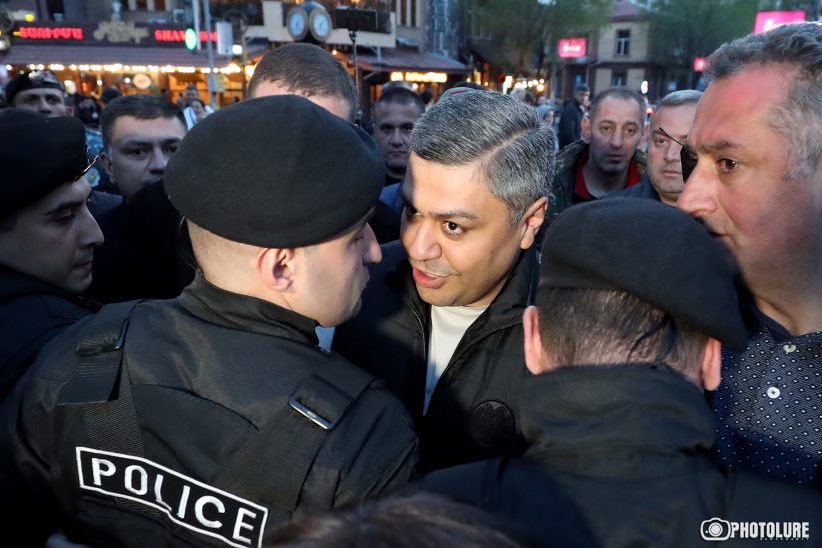 Artur Vanetsyan, an opposition leader in Armenia’s parliament, announced on Sunday that he and several other party leaders would hold an indefinite sit-in in central Yerevan to protest the Armenian government’s apparent openness to ceding control of Karabakh to Azerbaijan in ongoing peace talks.

In a statement, Vanetsyan and his allies demanded that Prime Minister Nikol Pashinyan resign and called on all “compatriots” to join the demonstration on Freedom Square in downtown Yerevan.

“The so-called ‘authorities’ have entered the last stage of the destruction of our state and statehood. We have no time to delay,” the statement said. “There is a way to stop this destructive cycle: Armenians must wake up and become one fist again.”

“For the sake of our homeland, our state, and the future of our children, today we must wake up, sober up, fight, and stop this government and its patrons,” the statement continued. “We will not go home until we reach our goal.”

“Dear compatriots, come to Freedom Square. Come with family, friends, relatives, come at any time convenient for you.”

The sit-in comes in response to a major speech Pashinyan gave to parliament last week, in which he said that Armenia should “lower the bar a little on the status of Nagorno-Karabakh and ensure greater international consolidation around Armenia and Artsakh (Karabakh).”

Pashinyan’s speech fueled mounting concern, in both Armenia and Karabakh, that Yerevan could be preparing to cede control of the territory to Baku during peace negotiations — and prompted a quick and furious backlash from leaders across Armenia’s fractured political spectrum.

Among other responses, the Karabakh parliament last week issued an extraordinary, unanimous rebuke of Pashinyan’s administration, “demanding that the Armenian authorities abandon their current catastrophic position” in peace talks with Azerbaijan.

On Monday morning, two veterans of the 2020 war in and around Karabakh announced that they would be joining Vanetsyan’s sit-in and launching an indefinite hunger strike.

“The purpose of the hunger strike is to draw the attention of the representatives of our generation to the situation around Artsakh,” wrote one of the men on Facebook.

Reports have emerged that the police have prevented the demonstrators from setting up tents or heaters on the square, culminating Sunday night in a scuffle between protesters and police that led to several arrests. In response, Vanetsyan said the police were acting “out of fear.”

“They are just afraid that the movement will gain momentum faster,” Vanetsyan told reporters.

Before joining the opposition, Vanetsyan was a close ally of Pashinyan and played a key role in his administration, leading the National Security Service from 2018 to 2019. In September 2019, Vanetsyan resigned from his post in circumstances that remain murky.

In the immediate aftermath of the signing of a ceasefire agreement between Armenia and Azerbaijan in November 2020, Vanetsyan was arrested on two separate occasions, the first on charges of “illegal conduct of rallies,” the second on allegations of “usurping power.” In each case, the court ruled that Vanetsyan’s arrest was unlawful and freed him from detention.

In June 2021, the I Have Honor alliance, led by Vanetsyan, entered parliament with about 5% of the vote, netting seven seats in the 107-seat body.

Several lawmakers from the other opposition party represented in parliament, the Armenia Alliance, have come out publicly in support of Vanetsyan’s protest.

“We have a plan from start to finish. We will make a statement shortly and move on to action,” said Ishkhan Saghatelyan, an Armenia Alliance leader and the National Assembly’s vice president.

“The Armenian people must come out to fight in the name of Armenia and Artsakh, and I assure you that this government has no future.”

Kulich, the Easter pastry delivered directly to your home